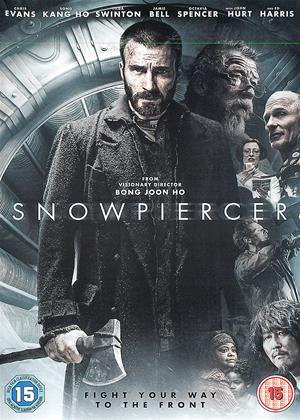 Although Bong Joo Ho has directed some brilliant Korean films, he comes seriously unstuck with this English-language effort. Not that the material, based on a nonsensical graphic novel, has much to offer anyway. The Snowpiercer of the title is a train that speeds around the world non-stop carrying the last remnants of humanity after the earth has frozen. Yes, really. The plot, such as it is, requires the lower classes at the back of the train to fight their way through to the upper classes at the front of the train. It’s an allegory of class warfare, you see.

It’s B-feature filming, in claustrophobic interiors, mostly in gloomy windowless carriages, with lashings of inane dialogue to eke out the run-time. It’s impossible to care about any of the paper-thin characters so expect no excitement or drama at any time. Intervals of misplaced black comedy further undermine the whole concept. The film has been overpraised for its allegorical content, but as a viewing experience it’s of interest only to completists of Bong Joon Ho’s work. See the brilliant Train to Busan to see how it should be done.

I originally read the comic/graphic novel and eventually tracked the film down for a watch yesterday.

First off, I'd recommend that you read/watch both as there are differences, that is not a criticism.

An inventive tale with a simple but strong narrative, an excellent cast with good performances all round, Harris in particular, although Tilda Swinton gets a special mention for the "ripeness" of her performance, her accent is worth the price of admission alone.

This film poses some interesting questions and will surely make you think whilst "entertaining" you.

Not always a comfortable watch, it will not be entirely what you expect with some twists along the way.

This film deserves a wider audience, find it and watch it.

It's kind of a steampunk post apocalyptic movie, which is typically right up my street. I looked at the cast of well respected actors and I thought this is going to be great. Unfortunately not, at least not for me.

The general idea behind this movie of a train that circles the Earth carrying the last of humanity is unremittingly stupid, and you are reminded of how stupid it is on a regular basis. Add to that some contrived action set pieces and no amount of quality actors and steampunk coolness could save this movie for me.

This film is truly awful on just about every level: starting with the stupid story, then grinding tragically through the terrible script, and then on to the heart-breaking waste of amazing actors. In the awful film category, this is one that has all the bases covered!

I really struggle to think of anything about this film that I liked. Well, other than Tilda Swinton's northern accent. But alas, it was a fleeting shaft of sunlight in an otherwise dull grey sky.

This really was dire. I persevered with it (nearly gave up several times!).

It did have some good acting (Tilda Swinton, Ewen Bremner, John Hurt, Ed Harris), and I usually like these sort of "cult" films, if that is the right genre for this. I think more B-movie would be my preferred description. Well, not even B, more a C or a D!

I just don't think the story was worthy of a film and the way it was realised by the director was vague and just generally lacking impact and good set-pieces. The scenes expected to be the good set-pieces seemed to be long and drawn out, either with too much directorial (artistic) flair, or a long and painful build up, so you just want to get it over with.

Strangely this film is rated highly by the critics.

Dreadful, Tedious, Steampunk Mess of a Sci-Fi movie which things it's clever, but isn't. - Snowpiercer review by PV

OK so this is based on a French sci-fi novel apparently so the Korean director is not solely to blame.

But it is truly awful - so bad I ejected the DVD after 40 minutes and I rarely do that, ever with dross.

I knew it would not improve and could predict the glib, trite, tedious, predictable message of class war layered onto everything with a massive trowel.

How anyone can give this B-movie tripe 5 stars is beyond me. Must have very low standards or a penchant for steampunk scifi or maybe reviewers are just trying to look cool by giving a Korean director 5 stars eh?

Either way, I do not care and am so glad I gave up on this cinematic disaster - though I am never getting those 40 minutes of my life back.

Snowpiercer provides one of the strangest conceptions of dystopian class war, but undeniably one of the most original and wildly creative of science fiction. Earth, now a freezing wasteland due to a major error in solving global warming, has its remaining populace board the indestructible and self-sustaining title train that travels all over the world. They all said the man who invented this train was crazy, but now Wilford is revered as the savior of the human race. Maybe they thought he was mad for not shifting his resources to a spaceship instead. The train is divided by the class system of the upper class at the front cars and the lower class in the back. If you’re useful and needed, you move up the cars. If you’re not, well, you’re stuck in the dirty bunks of the caboose eating meaty Jello slabs as food for the rest of your life.

This naturally pisses off those living in the back of the train and a revolt seems inevitable. The master of this operation is Curtis (Chris Evans), a tactful leader who seeks guidance with the back car elder (John Hurt). He holds the rage back of the others, waiting for the opportune moment to strike against the armed forces that prevent the poor from moving up the train. The shrill and richly dressed Mason (Tilda Swinton), who assigns the punishments for misbehavior in the cars, only adds fuel to fire that is soon to erupt. She continues to repeat that everything has its place on the train and that these people are the tail. When Curtis finally assembles his plan and summons the courage, it’s a brutal and savage uprising as the lower-class citizens of the train attempt to subdue guards and make their violent climb.

For some assistance with the doors, the group employs the help of criminal drug junky Nam (Kang-ho Song). He reluctantly agrees in exchange for releasing his best female friend from the train’s prison and paying him in the form of a green drug known as Krono. With his help, the band of rebels travel their way through a plethora of different train cars that support everything from food production to aquariums to night clubs. There are guards and hired guns lurking around every corner for them including one car that is completely packed with masked warriors brandishing blunt weapons. It sounds pretty absurd to see something so intentionally intimidating behind door #3, but it does lead to one of the film’s best-shot action sequences.

Snowpiercer was written and directed by Bong-Joon Ho, the Korean filmmaker best known for his monster horror picture The Host. He crafts a fully-defined microcosm aboard this train. Every angle has been thought of from how the train maintains its resources to educating its youth. The rebels calmly try to make their way through a classroom car where an overly enthusiastic teacher dishes out history lessons and sing-alongs for the importance of the train. Another car seems to have the cabins reformatted to act as medical and dental offices. Very few if any of the cars on this train look the same as the other and they create a vividly contained society. And, not to give too much away, but I love how the most minute specifics of maintaining a train full of humans plays very heavily into the shocking surprise ending.

Considering 99% of the film takes place on a train, it’s incredibly well shot in both providing a sense of scale and staging some fantastic action. In one of the most far-fetched but oh-so-wonderful moments, a hitman attempts to shoot at the rebelling forces through a window as the train wraps around a tight turn on the tracks. There’s no way either party could see out the window that clearly in a snowstorm to return fire on the specific car where gunfire came from and yet I didn’t care because it looks fantastic. Actually, that could summarize the whole film right there: a society on a train is a farce, but Bong-Joon Ho makes it a pleasing one to our eyes.

Snowpiercer does what the best science fiction pieces do by simultaneously transporting us to another world and providing intriguing commentary. The script considers several variables in the concept of a train society with so many details you could spend hours analyzing. For a dystopian tale that grows darker by the minute, it manages to be an exhilarating thrill that delivers on some brilliant action amid the thoughtful script. As depressing as the environment appeared, I’d like to see more of it. This is one of the most dark and dazzling science fiction pictures of the decade.