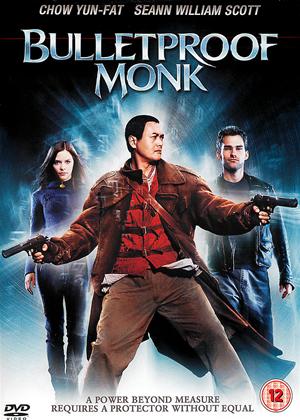 Synopsis:
He has no name. He protects a powerful secret. Now, to fulfill an ancient prophecy, he has found the one who's supposed to take his place - and it's the most unlikely candidate of all. In this dazzling action adventure, the Monk (Chow Yun-Fat) is a Zen-calm martial arts master, whose duty has been to protect a powerful ancient scroll that holds the key to unlimited power. Now, faced with finding the scroll's next guardian, the Monk's quest brings him to America. According to an ancient prophecy - and to his disbelief— the Monk's successor is a charming, street-tough wild card named Kar (Seann William Scott).
Using high-flying acrobatics, martial arts action and quick witted humour, the Monk instructs Kar in the ways of a protector and the duo become partners to save the scroll from the power hungry armies who try to steal it!
Actors:
Yun-Fat Chow, Seann William Scott, Jaime King, Karel Roden, Victoria Smurfit, Marcus Jean Pirae, Mako, Roger Yuan, K.C. Collins, Sean Bell, Kishaya Dudley, Rob Archer, Mauricio Rodas, Bayo Akinfemi, Russell Yuen, Albert Chung, Karis Han, Paul Fauteux, Raven Dauda, Isys McKoy
Directors:
Paul Hunter
Writers:
Ethan Reiff, Cyrus Voris
Studio:
20th Century Fox
Genres:
Action & Adventure, Sci-Fi & Fantasy

There's this Buddhist scroll which gives the first person to read it almost infinite superpowers, but that would clearly be a bad idea, so nobody's allowed to read it, ever. Which makes you wonder why they bothered to write it in the first place, but it's the MacGuffin, OK? So stop asking awkward questions. Anyway, in 1943 this Nazi wants it so he can rule the world and stuff, but Chow Yun Fat foils his plans because he's Chow Yun Fat. 2003, and the same Nazi, who by now is getting on a bit but has a whole bunch of henchmen with automatic weapons and black helicopters and everything, is still after Chow Yun Fat, who hasn't aged a day because The Scroll makes you immortal as well as bulletproof. So basically it's "Raiders of the Lost Ark" meets "Highlander" with added kung fu.

Am I making this sound like a ridiculous amount of fun? Because alas, it isn't. There's surprisingly little action, and in between we get shedloads of tedious padding in which Chow Yun Fat, never the world's best actor and less so when forced to act in English, exchanges wisecracks with the usual annoying young man who can't act at all, who we're supposed to like because he likes himself so very, very much, and has cheekbones covered in designer stubble that comprise almost his entire face. There's a pretty girl in it as well because there always is, but she can't act either, though she did surprise me by at no point gratuitously taking off most of her clothes. And you know the fight scenes are badly choreographed when you find yourself paying more attention to the way all the main characters can only make truly athletic moves when the camera can't see their faces than the actual fight, let alone caring who wins.

I should add that, despite the title, there's almost no evidence that the monk is in fact bulletproof. And you see that DVD cover up there with Chow Yun Fat in his trademark two-gun pose? Well, that happens once in the entire movie, for about 10 seconds, and is blatantly only there at all so they could use it in the promotional artwork. It's not horrible; it's just not very good. And for an all-action movie, it's decidedly short on action. Also, is it just me, or should a film with this much lighthearted comic banter really feature genocidal Nazis?