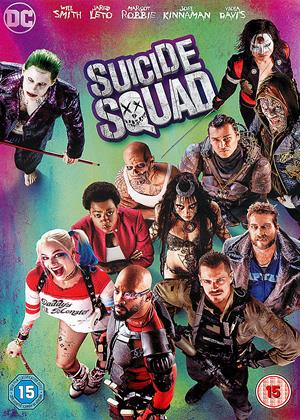 A refreshing change from the regular Super Hero movies.

I thought the characters were interesting and pretty cool, an easy to watch fast paced film that we all enjoyed.

Watch it again in 12 months? No, but probably in a couple of years, the storyline wasn't a must to re watch, but it was fun to watch once.

My expectations were a little on the low side, but I was pleasantly surprised by this film. Margot Robbie (as Harley Quinn) makes the movie fun (for sure) and the premise of the plot and the special effects are very good.

Well worth a watch, but would lower your expectations a little, if you have seen the trailers.

I would be surprised if fantasy / comic hero fans don't enjoy it to be fair.

Given how bad recent DC tie-ins have been I was not expecting much but happy to say it was a genuinely good movie to watch. Yes it is the dirty dozen plot, the characters have been made more likeable than their backstories would suggest and there are no plot twists (or are obviously).

Get past the plot and the acting was good (especially Margo Robbie as Harley Quinn), the story progressed at a good pace while still giving time for characters to develop and it didn't just degenerate into effects. Didn't even mind that the end was clearly setting up for a sequel. Even my partner who doesn't like comic book movies really liked this.

In this bog-standard superhero fare, another bunch of comic book ‘meta-humans’ fight another bunch of super-baddies to a random selection of pop songs. Perhaps one of the most boring of the whole genre. Not a single original idea or iota of intelligence in the whole by-the-numbers waste of screen time. Not even worth watching for the cgi fight scenes, which are an over-edited mess.

Remember "The Dirty Dozen"? This is the same film in fancy dress, only de-clawed and castrated. In that movie, men who were mostly very bad indeed, and in one case spine-chillingly loathsome, went on a suicide mission to ruthlessly slaughter a bunch of senior Nazi officers (and any civilians who happened to get in the way, including rather a lot of women) in the hope of having their sentences reduced if they survived. Of course, most of them didn't.

Here, we have various allegedly evil people going on a "suicide" mission we know all the remotely interesting characters will survive because they might be needed later in this massive ongoing franchise, therefore they're accompanied by a useless bunch of totally expendable soldiers who might as well be wearing red shirts. They're up against a generic supervillain who wants to rule the world because that's what generic supervillains do, and a horde of mindless crystal zombies who can be smashed to bits with neither accountability nor gore. So, your standard "superheroes vs. far too many robots for far too long" scenario. All of which takes place in a gloomy deserted cityscape that's both visually boring and identical to the way the inevitable computer game will look.

Will Smith is an actor I've never been as impressed by as everyone else seems to be, and as Deadshot, by far the most important character, he totally fails to convince us that he's anyone other than Will Smith doing his default charming wisecracking schtick. There's a token flashback in which he actually kills someone for money, but other than that, there's no evidence whatsoever that he's anything other than a really nice and witty guy who loves his daughter, and just happens to be shooting magic robots with a machine-gun because it's one of those days. Margot Robbie is tremendous fun as a controversially sexed-up Harley Quinn who, alone of all the characters, genuinely seems to be mad, but absolutely nobody is all that evil other than their boss Amanda Waller, a truly horrible person who (not a spoiler at all) is a major ongoing character in the comics so no way is she going to be killed like she so richly deserves. And most of them barely have personalities at all.

In addition to lousy characterization and dimly-lit, badly-choreographed fight-scenes, the plot has holes big enough to fly the Death Star through. For example, it makes sense that the secret service is trying to cover up a terrible mistake by using these covert and expendable operatives instead of calling on real heroes who would obviously be far more effective. But it makes no sense at all that a gigantic glowing vortex in the middle of a major city that has already resulted in massive casualties wouldn't cause people like Batman and Wonder Woman to show up and help with what is obviously a supernatural situation the government is lying about by trying to pin it on terrorists!

I'm giving this one star as a movie overall, plus half a star each for Will Smith's engaging but incredibly miscast performance, and the funny, sexy, crazy Margo Robbie, who actually belongs in this movie. Oh, and a version of the Joker with sightly less charisma than Gollum is in it too for about five minutes. Batman's in it for nearly as long - shouldn't he be on the poster so they can pretend it's about him? He's got to be a bigger attraction than Captain Boomerang.

Will needs some lose change - Suicide Squad review by NC

Another Dirty Dozen film with the endless characters apparently in Marvel Comics. Not sure how healthy the constant violence of all the modern films is for the audience, especially the younger ones. Violence and killing and maiming in a semi-comedy genre can appear acceptable, or even desirable, to the malleable brain.

Batman has been done pretty well over the years. Iron Man was quite fun, but all the spin-offs are getting quite boring. Noisy and massive computer effects, but very little credible story, or dialogue, or acting. Do you really need so many characters at once?

Certainly childish.....doubtful content for children.....and not nearly clever enough for adults like Deadpool...........so what is the point?

Expect makes millions in the States.

Where is Ed Murphy these days?

In the glut of superhero movies for 2016, Suicide Squad appeared to be the wild card. With a diverse cast, relative unknown characters for the uninitiated of comic books and a Dirty Dozen vibe, it certainly has all the elements to be a standout. Which is why it’s a major disappointment that it falls right back in step with the same old superhero movie problems.

Initially, I was ecstatic for such a project given that it was being written/directed by David Ayer. If you look at his resume of Training Day, End of Watch and Fury, you can see that he specializes in making movies about evil and nasty people that we question as do-gooders. He’s a strong choice to adapt DC Comics’ band of villains forced by the government into completing secret missions. He could make these villains truly stand out as bad guys. It’s just too bad he’s stuck in a PG-13 picture where he can’t make the characters as despicable, violent or psychotic as they should be.

If the characters can’t be nasty, they are at least likable. Deadshot (Will Smith) is the heart of the movie as a dad trying to reform his ways of killing people for money. Harley Quinn (Margot Robbie) is a pure villain that cheerfully delights in her sprees of crime and murder. Diablo (Jay Hernandez) is the reluctant pyro villain that is through with using his powers. There are more villains introduced in the team, but those are the only ones that matter or given proper introductions. Of course, the true villain is Amanda Waller (Viola Davis), the government figure who assembles the Suicide Squad. Thanks to Davis’ powerful performance and the character’s cold determination in protecting the country, she should have been the central antagonist.

Instead, we’re left with a rather bland and forgettable villain of Enchantress (Cara Delevingne). Originally recruited to be the head of Suicide Squad, she escapes her magical cage and begins creating her doomsday machine to rule the world. Her magical machine shoots blue lasers, she assembles an army of tar zombies to defend herself and her brother appears as a rejected monster design from Thor. You know, standard superhero setup.

But something as unique as Suicide Squad shouldn’t reserve itself to such a tired comic book scenario. Waller intends to use the squad as a means of secret protection, but sends them out on their first mission to stop an apocalyptic sorcerer that’s taken over a city. This defeats the purpose of her “if they get caught we throw them under the bus” rule as there are no local authorities to catch them and the FBI escorts the squad through the entire mission. This, too, defeats the purpose of having bombs inside their necks to keep them in line. Waller can control all the explosives from remote - so why does she need Rick Flag to be in the field keeping an eye on them as well?

Wondering about where the Joker (Jared Leto) is in all this? He’s wedged into a subplot that has little to no affect on the central story. He’s such a tag-along to this movie that his arc is dropped by the second act. A few simple snips and he could be removed from this picture easily. It’s such a shame that Leto put so much work into this performance that was unique and original, but never given a chance to develop past mere snippets of scenes.

For as much as the movie stumbles and trips over its characterizations, writing and editing, there is some salvageable content here. The cast is the best feature. Will Smith is as likable as always, but also more subtle in that he never breaks out into overstepping his role. Margot Robbie has a perky charm to the character of Harley as she is always fun to watch. The most surprising cast member is Jai Courtney who proves that he has more charisma outside of his more simplistic action roles. Aside from Joel Kinnaman and Cara Delevingne, this is a strong cast. I even liked some of Ayer’s style in telling the backstory of the squad and his visual flair with making more of a street Dirty Dozen.

I wanted to like Suicide Squad so badly because of this, but its shortcomings are just too steep to ignore. The clunky editing, the overstuffing of characters, the terrible music choices, the blah action scenes and the most tired of plots plunge this picture down into the murky depths it aims to escape from. It’s a frustrating mess where the bad guys are not quite bad enough and the movie’s tagline “Worst Heroes Ever” couldn’t be more fitting for the wrong reasons.