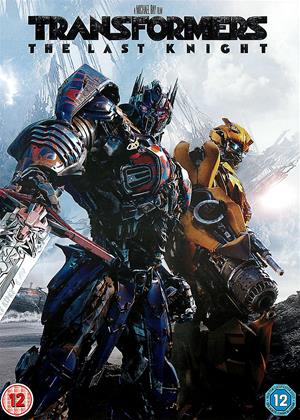 Reviews (6) of Transformers: The Last Knight

A jigsaw with missing pieces - Transformers: The Last Knight review by wj

This movie was designed for the US market where no thought is required or expected in an audience and as long as the story line has small words, lots of bullets and an explosion here and there then its cool.

Story line is a wiggly and as messy as a bowl of bolognese but no where near as appetising.

Glad I waited for the DVD and didnt pay to take the family so see this on the big screen, even my 11 year old said he would have walked out half way through.

They should make this the last Transformers movie, it's been a bit done to death. I probably won't rent it again as I don't think it's worth a second watch. Even my kids didn't want to watch it!

how can a film with a British ninja robot butler be bad?

Ive given this film 4 stars as i clearly forgot to put my brain back in after watching it. All i remember is lots of explosions, robots fighting, arguing, dancing, more explosions, some man on robot fights, robot on robot, man on man, woman on robot. Oh, nice dress. Woman robot on robot, tank on robot, Hannibal lector on robot, robot on car, car on man, sea on man, robot on sea - the action is endless.

Yes it rubbish, but it never takes itself to seriously (through the middle it almost turns 100% comedy). Unplug the brain, turn up the 7.1 kit and enjoy.

If you’re into this repetitive franchise, it’s beyond criticism. If you’re not, you’ll be gobsmacked at how anyone could be. With its farcical premise, incoherent plotting, clichéd characters and ludicrous dialogue, it’s an object lesson in the dumbing down of action films.

Director Michael Bay’s back catalogue clearly shows he has the visual imagination to shoot stylish films. If only he’d put it to better use, but when the franchise makes so much money from lobotomised filmgoers, why bother? He’s gone down the George Lucas route. Makes you weep for the future of blockbuster cinema.

This was horrific. I fell asleep at the first go of watching this. Nothing made sense. I didn't care about any of the characters. Anthony Hopkins was laughable. The posh Megan-Fox-alike-(+10yrs) was okay looking but no Megan Fox and wooden as an actress. It misses the Whitwicky character I think. Without the main human character this is nothing to tie it together.

In terms of metal on metal action go and watch your local dustcart on its rounds - its way better than this!

In the end I honestly didn't care about what was going on. This has put the nail in the coffin of me watching any further Transformers films. Best stick to the first 2 movies if you like this kind of thing.

I didn't think it was that bad, arguably the best one since the first (although I except that's not saying much!). It's nonsense, pure nonsense but generally I enjoyed the 'movie', some spectacular effects and action sequences, a few laughs along the way.

Leave your brain behind and you might get something out of it. Better than the latest "Pirates" and "Mummy" efforts anyway, a looong way away from the likes of "Dunkirk" and "Blade Runner 2049" but then you knew that already. ;-)

Michael Bay has touted himself as a filmmaker who doesn’t care for the haters as he reasons that he makes movies for 13-year-old boys. That is an insult to 13-year-old boys. They deserve a better movie than Transformers: The Last Knight, the fifth and most excessive of the saga to date, becoming further derivative and incoherent to the point when these films are the most nihilistic of bombastically overloaded special effects. Bay may also retreat to his filmmaking being for fans only, but let me put on my fanboy hat for a moment: Wouldn’t a Transformers fan like to see the legendary Unicron arc come to an actual conclusion and not be jumbled in a mess of overly complex subplots? Those fans won’t get that here and I can only hope they start to see Bay’s laziness for these pictures.

It’s not that I don’t want to enjoy some mindless entertainment of robots battling each other, but Bay’s filmmaking doesn’t adhere to the most bare bones of making such a film work. He has once more overstuffed a Transformers movie with way too many elements and not a single one developed enough to appreciate, furthering my theory that Michael Bay is an unfocused director. Let me dissect everything that’s going on here, which is not an easy task after the loud, chaotic and incoherent scenes Bay’s fills this picture with.

1. Transformers are still being hunted down by the world’s military forces, specifically the TRF. Dedicated to protecting Earth from robots, they have formed a police state (I think) to hunt and destroy all Transformers. Except for the evil Decepticons, who are imprisoned for some unexplained reason. No, wait, there is a reason: they need to be broken out of prison by Megatron when he agrees to work with the humans. Sure, because this strategy worked out so well before.

2. Mark Wahlberg’s character of Cade is hiding the heroic Autobots and deeply misses his daughter who only appears in this movie over the phone and in text messages. I’m not sure why he bothers protecting the Autobots considering how mean, destructive, ill-tempered and unhinged their personalities are. If the scenes of Autobots eating cars, setting houses on fire and crashing into each other for fun is supposed to make me care about these characters, they fail miserably.

3. A secret order of Transformer knights from the Dark Ages are trying to protect Merlin’s staff, a Cybertron relic that can be used for yet another doomsday device. The only one who knows about its secret history is a babbling Anthony Hopkins, unfortunately, saddled with lines where he must call people “bitch” and “dude” like an old codger trying to be hip. He needs Merlin’s descendant of a woman to find and wield the staff, played by Laura Haddock in typical Michael Bay attire of tight dresses and high heels that show off her ass and legs.

4. Autobot leader Optimus Prime has turned evil with the conspirator Quintessa, who promises that she can restore the Transformers homeworld of Cybertron if she can acquire Merlin’s staff. I suppose it should be shocking that Prime has turned to the dark side, but he has spent so many of these movies causing destruction and violently murdering his enemies that this isn’t such a stretch.

5. Giant horns start protruding out of the Earth, revealing that our planet is one giant Transformer called Unicron.

6. Izabella, a plucky little girl who lost her family in one of the attacks of the previous Transformers movies, seeks to prove her worth as a capable mechanic for as long as the first act will allow her to hold the story.

Doesn’t that seem like an awful lot of plot for some mindless action? And that’s the fatal error of all these Transformers movies: excess. There are so many Transformers of clunky, ugly and confusing design that it’s tough to tell who is who, even when a scene introduces a handful of Decepticons with their names on the screen. They’re also so underdeveloped, existing as walking cliches and stereotypes, that I felt nothing during their moments of combat or when they die. The same goes for the human characters who do their best to out cartoon their CGI co-stars. Mark Wahlberg’s character is insufferably annoying, Laura Haddock is a smug snob and Anthony Hopkins looks like he gave up caring about acting long ago. Poor Stanley Tucci is also drug back into the series as a drunk Merlin and Bay must own Josh Duhamel’s soul to force him into every one of these movies as familiar military soldier.

The only nice thing I can say about The Last Knight is that it didn’t offend me as palpably as the other entries. There was a lack of racist Transformers, the women played a larger role in the plot and the action scenes were shot a little less blurry. But so what? There’s still nothing to care about in this movie. There’s no reason to be invested in anyone or anything; characters will cackle with one-liners before any unique aspect of their personalities can be explored and a coupling of overcompensating explosions and horrible editing hinder the thrill of the neverending action sequences. Just because Bay did a little pandering does not excuse the far more concerning issues of his filmmaking. You can’t put lettuce on your garbage sandwich and call it healthy.

Bay seems to be under the impression he is making these movies for fans only, as though he’s adhering to the original cartoons. I went back and watched the original G1 Transformers that started this whole craze. That cartoon was preposterous, confusingly directed and featured some of the worst animation errors I’ve ever seen. And, yet, I could tell the Transformers apart and knew more or less what was going on with the plot, more than I ever would in Bay’s $200+ million vision of a giant robot movie. When a poorly aged cartoon from the 1980s is more coherent than its big-budget summer blockbuster counterpart, maybe Bay should reexamine his methods. Nah, he’ll just keep making them. How could he say no to making cinematic junk that always makes a billion dollars? And how could the public? After all, Bay has said he doesn’t care about the haters and that they’ll just keep seeing his movies anyway. Think about that when you walk out of this travesty unfulfilled.