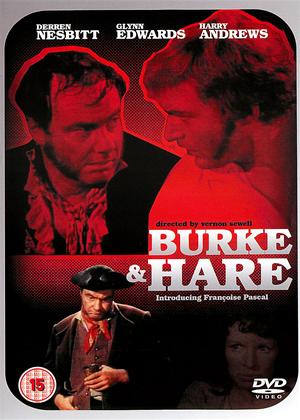 Synopsis:
In the 1820s, the great medical universities of Edinburgh are crying out for fresh corpses to dissect in the classroom... and the Resurrection Men are happy to supply them. No questions asked. Poor Cobbler William Burke and his landlord friend Hare fall into body snatching when one of Hare's tenants dies without paying the rent and they sell him to the surgeons to make the money back. The money's good. Very good. And tempting too. Now the deliberate killings start. For Burke and Hare, it's easy. After all, who'll miss a wretched simpleton, a filthy down-and-out or an old alcoholic? They're worth more dead than alive...
But when the pair start to ton their deadly attention to the beautiful young prostitutes from a high-class brothel, their luck begins to run out...
Actors:
Paul Luty, Roy Macready, Derren Nesbitt, Susan Coates, Françoise Pascal, Christine Pilgrim, Joan Carol, Robin Hawdon, Kenneth Thornett, Yutte Stensgaard, Katya Wyeth, Caroline Yates, Glynn Edwards, Yootha Joyce, Dee Shenderey, Frederick Piper, Paul Greaves, Thomas Heathcote, Victor Brooks, Harry Andrews
Directors:
Vernon Sewell
Producers:
Guido Coen
Writers:
Ernle Bradford
Aka:
Horrors of Burke and Hare / The Bodysnatchers
Studio:
Simply Home Entertainement
Genres:
British Films, Classics, Horror
Countries:
UK

Reviews (1) of Burke and Hare

When this rental company claims that a film you've never heard of is a "classic", it's almost certainly the exact opposite of what people normally mean by a classic, but I suppose if they used a more accurate word nobody would rent it. This extremely obscure version of a much-filmed tale, with its cast of early seventies B-list, C-list, and just plain listless sitcom actors, its second-rate director whose two Hammer outings were among their least successful horrors, and its desperately threadbare production values, was never likely to be an unexpected masterpiece. And guess what, it isn't.

In a desperately misjudged attempt to reimagine Hammer's 1960 version of the tale, "The Flesh And The Fiends" with Donald Pleasance and Peter Cushing, in a way that would appeal to early seventies sensibilities, it goes for the kind of topless romping that was naughtier than Carry On but not actual porn at the expense of anything resembling horror. We get rather a lot of this, most of it courtesy of Yutte Stensgaard, an undeniably decorative young lady who is an "actress" in the same way that this film is a "classic", whose finest hour was starring in "Lust For a Vampire". Most of this has nothing whatsoever to do with the plot, and is presented as a series of comically bawdy vignettes, many of them involving zany perverts in fancy dress. At one point, the story grinds to a halt while several of the cast watch through spy-holes as two half-naked people chase each other round a bedroom for no reason at all. There's even a scene in which several characters literally sit round a table telling each other rude jokes.

Though given the flat direction, performances ranging from adequate to awful, and cardboard sets so tiny that the conclusion of the story has to be narrated over the closing credits rather than actually shown because there's no way they could fit even a small crowd into the studio, it's probably just as well that we spend so much time watching irrelevant minor characters frolicking with topless women, because many of the cast are far better at taking their clothes off than acting.

This is undoubtedly by far the worst movie about everybody's favourite incompetent Edinburgh-based 19th-century serial-killing double-act, and that includes "The Greed Of William Hart" from 1948 with Tod Slaughter, which looks even cheaper than this one. It's not even a terribly good DVD transfer. Watch any of the other versions instead, even that very peculiar one starring Andy Serkis, unless you're unhealthily obsessed with Yutte Stensgaard or Paul McCartney's brother.