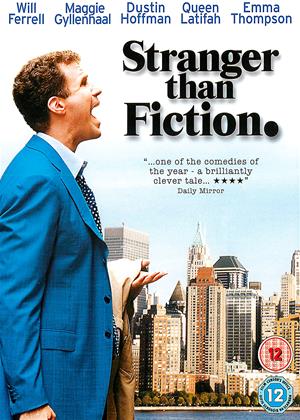 Reviews (9) of Stranger Than Fiction

'Stranger than fiction' is one of those films which probably suffers poor reviews due to the way it's promoted as a comedy. If you're expecting a typically wacky Will Ferrell over the top comedy you're going to be disappointed. Although far more mainstream, the film is very similar in tone films like 'Be Kind Rewind', 'Eternal Sunshine Of The Spotless Mind' and 'Being John Malkovich' and while there is some comedy in the film it's more dark and surreal than laugh out loud comedy. The acting was great and the story within a story plotline was really clever idea and superbly executed, and if you like films by 'Spike Jonze' or 'Michel Gondry' chances are you like this.

I am a huge Will Ferell fan to begin with, but really do prefer him playing these (slightly) straight man roles!! This film was both hilarious to the point where I spurted red wine all over myself I was laughing so hard and poignant. the characthers are so well written and sypathetic, but most importantly I felt, likeable!! Emma Thompson was great, Maggie Gyllenhall I found very attractive for the first time and Dustin Hoffman was hilarious!!

I really regret not watching this at the cinema as it will be for me the one of the most memorable movies of the year!!

I may go out and by it today!!

Such an amazing film that I kept wondering who could have had the imagination to think up the concept! Boring taxman, played brilliantly by Ferrell, goes about his usual routine but finds his life is being narrated by a female voice. He goes to several colleagues and then psychiatrists who think he is weird or schizophrenic. Finally he works out 'the voice' is telling a story and he ends up with a bizarre literary professor, played with comedic genius by Hoffman. The film has some interesting visual effects, an original story, a sweet romance and brilliant acting performances. A winner all round.

Different but good movie, its not your usual Will ferrell movie, kept me interested and I enjoyed the movie, but also its not the best he's done but certainly worth watching.

Not a fan - Stranger Than Fiction review by CP Customer

I generally love films with Will Ferrell & was interested to see if he could also act in a more serious film....was I disappointed!!

The film was ever so slow to get itself off the ground & frankly boring. So boring that I did not bother to watch the whole movie!

Postmodern Fantasy Fairytale which is sometimes funny if you can suspend disbelief... - Stranger Than Fiction review by PV

This is the sort of comedy the British film industry just cannot make - a nice simple comedy based on a fantasy conceit which has a moral core and a resolution at the end.

I have always hated Emma Thompson - she always plays Emma Thompson and I cannot get past that! She is also SO what the Americans thinks is a typically British or English person WHICH SHE IS NOT - she is an American version of a Brit woman, and that irritates me.

Dustin Hoffman adds class to everything he's in though.

The start of this film is very funny - and maybe it is a tad overlong with some unnecessary subplots.

Also, my suspension of disbelief was sorely challenged at times, but it's far worse in other fantasy films from Hollywood. So this is not at all bad - although postmodern fantasies are not my thing.

This film is mildly amusing rather than laugh out loud. The storyline takes its time and you have to sit with it as it unfolds, but it gathers strength and pace as it goes along, with a twist right at the end which made me want to cheer. Some excellent performances - Will Ferrell surprisingly good in a straight acting role; Emma Thompson doing a fine job as a slightly barmy writer. There are some carefully placed thought-provoking ideas discreetly tucked in to the narrative, which stay with you long after the film has ended: what is better - to have a long life or a good death?

So - not an action-packed blockbuster, or a har-de-har comedy, but a clever little film for the discerning.

Is it just me? - Stranger Than Fiction review by NO

I may find myself in a minority of about one, but I found almost nothing to like about this film: the supposedly ingenious plot device of having the lead be a character in another's book is well-worn, and this incarnation is sluggish and predictable. The doe-eyed Anna (Maggie Gyllenhall) is intensely annoying from start to finish, and her relationship with Harold is an affront to plausibility. Equally implausible, if not downright incomprehensible, is the choice Harold makes at the film's climax (did I miss something?). Even the usually sublime Emma Thompson is guilty of some seriously over-acting. Some (cookie) crumbs of entertainment were provided by decent performances by Dustin Hoffman and Queen Latifah, but overall a dull and unimaginative experience.