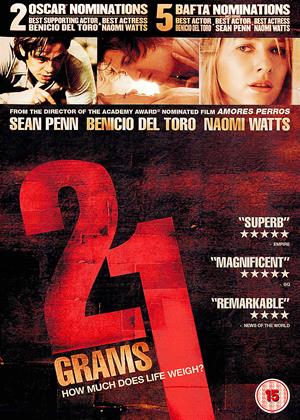 Piece by piece, the puzzle comes together - 21 Grams review by CP Customer

I love Pulp Fiction, the different mini-stories that wrap around each other into one twisted and funnt whole.

I love Memento, having the benefit of remembering what Leonard's (Guy Pierce) character has forgotten and seeing the story develop from two different timelines.

21 Grams takes this idea of telling a story out of the order in which events happen to the very extreme. It's not an easy film to watch and it's easy to get lost at the beginning but don't worry, all the stories tie up by the end of the film.

Problem is the story does suffer because it's told in such a way. The main characters are all pretty bleak and trying to find any sympathy for them is difficult while your trying to untangle the plot. Ultimately, there's not much story here at all but it's saved by some great acting from some top actors and the cinematography is pretty good too.

Overall, good film but I'd just watch it the one time to savour the experience.

stick with the scenes going into various time zones and you will be rewarded with piecing together of the tragic lives of the main characters.

Not easy to follow at first but if you keep a tight attention span you will not be disappointed.

Not for lazy viewing -where the story is spelt out for the less intelligent!

Well, things just go from bad to worse for the three main characters involved. Didn't know what was going on at the start of the film, but got into it, and ended up thinking the film was interesting, but heavy.

Many people have praised this film, I won't.

It is a non-linear story, in fact 3 interwoven ones.

I had no interest or sympathy for any of the characters they seemed the usual cliches: born-again Christian, former drug addict & so on. If the film had been made, cut into random pieces & then stuck back together that gives a good idea of what you'll watch. I had no idea or determination to figure out the difference from past,present or future. After 40 minutes I thought "o no not another 70!" This din't engage me.

Watch it if you are a masochists that wants to feel depressed.

A difficult film which can be rather 'heavy' at times, but a very interesting one - 21 Grams review by Philip in Paradiso

This is the story of an academic (Sean Penn) who will die unless he gets a heart transplant. What follows is the story of his heart transplant, his relationship with his wife (Charlotte Gainsbourg), and the role of 2 other couples that cross his path. The story is centred on S Penn, whose acting is good. But I found that of Naomi Watts better. However, the acting of Benicio Del Toro is, in my view, by far the most powerful and gripping: his presence on screen is simply amazing. He is like a wounded bull that is fighting against fate and tragedy. His acting is simply superior and breathtaking.

Although the movie takes place in America, the underlying themes are unmistakeably Hispanic (Spanish/ Mexican, given the background of the director): death Vs life, fate and destiny, grief and passion, loss and regrets, love and hate, tragedy and the desire for revenge... Add to this the fact that the director deliberately jumbles up the story line (it doesn't follow a linear/ chronological order, but is a juxtaposition of storylines and very frequent flashbacks), and this means that the film can be tiring -- almost exhausting. The combination of the confused storyline (during the 1st hour, at any rate, until things fall into place and you start making sense of the plot) and the intense tragedy and passion are not for the faint-hearted.

So, in many ways, it is an unusual film, very intense, deep and difficult; it involves you on a profound emotional level with the questions it asks, with explicit religious (Christian) references and sub-themes. I felt overwhelmed and exhausted at first, also because the camera seems to move in a jittery way all the time. But it is an interesting film and I am happy I have seen it. It is a one-of-a-kind sentimental drama, which (almost) becomes a thriller towards the end.

Be prepared, and you will enjoy it. But you will need to be prepared!

An astounding, powerful and at times very moving thriller with some fantastic performances and a very clever edited construction. This is a film put together like a puzzle but with all the pieces in random order so the timelines jump about allowing the viewer to see events before knowing their significance. This works really well and doesn't feel like a gimmick but gives the story added twists and depth. It's the story of three characters whose lives become intertwined following a tragic event. Jack (Benicio Del Toro) is an ex con and recovering alcoholic who has turned to devout Christianity in order to change his life but when he accidentally kills a man and two daughters in a car crash the tragic event sends his world crashing down. Cristina (Naomi Watts) is the wife and mother who loses her family as a consequence and struggles with the immense grief and finds solace in the arms of Paul (Sean Penn), a man who has a secret that will affect all their lives. This is a superb film, it's a cause and effect narrative that looks at the effect of sudden death on life and tries to offer some meaning to tragedy and the depth of human feelings in the brief period we call life. At times it's a really emotional experience and the three main performances are award nominated and the cast also has Melissa Leo, Danny Huston, Eddie Marsan and Charlotte Gainsbourg making for some powerhouse acting. This is a top class film and one I highly recommend if you've not seen it.

not to clever - 21 Grams review by CP Customer

hard to keep up to all lot of flashbacks