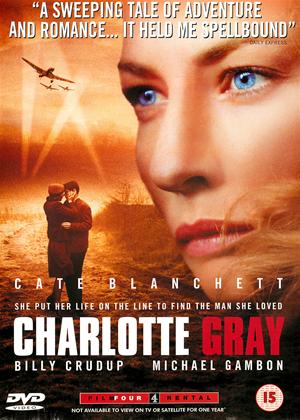 Essentially about the French resistance towards the end of the 2nd WW. This starts before the recruitment of Charlotte Gray and ends 6 months after she left. It is gripping, sad, and poignant. A great cast with good chemistry portraying a book of Sebastian Faulks. Amazing, powerful and unmissable.

It's a dull wartime romantic drama with added bogus Frenchmen. Err, that's it.

The cast is fine, with Cate Blanchett in the lead, romantic interests Rupert Penry-Jones and Billy Crudup, Michael Gambon to add a bit of gravitas, and Anton Lesser as the local baddy / collaborator. The photography is fine with excellent background shots of the Scottish highlands and the French landscape. And there's nothing really wrong with the story, although it does seem a tad silly for an infatuated young woman to parachute into Vichy France in search of her airman boyfriend who's been posted missing. That aside, she then joins up with the local Resistance and has assorted not very exciting adventures...

So what's wrong with the film, then? It's a combination of the script (not very good) and the director's decision not to have any foreign language (apart from a few words in German). France without anyone speaking French? Not even a French accent? Really?

While it clearly isn't necessary for the actors to speak in funny voices like the cast in 'Allo 'Allo, the decision to have them speak in perfect English made it too much for me - and you can add to that the comically bogus Scottish accent adopted by Ms Aussie Blanchett, but only when back in Blighty. Ms Blanchett does wear a beret well, though.

I was also disappointed by the two subplots, the deportation of the Jewish children and the supposed British (or was it the Gaullists?) betrayal of the Resistance members because they were communists, both of which were naive and lazily, weakly and clumsily handled.

The film was directed by fellow Aussie Gillian Armstrong, so I blame her...

It's not a bad film, but the direction just didn't work for me. I didn't dislike it and I would like to give it 3/5 stars because it's a fairly average romance even if it is pretty dull, but I'm going to have to mark it down. 2/5 stars.