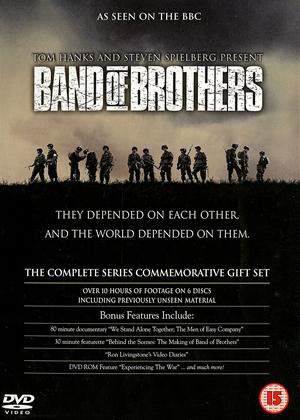 Reviews (4) of Band of Brothers

Out of this world! - Band of Brothers review by CP Customer

This programme, is easily one of the best things I have ever watched. It is eye-opening, beautiful, graphic,and poignant.

The cast are all amazing, regardless of what you thought of them previously, it looks fantastic, the music is brill..... I could go on and on! (I'm not being paid-honest!!!)

Having also read the book, it is factually on the money, which is always a bonus!

Not really sure what else to say, other than watch it-you will not regret it and you will watch it again and again!!!!! Also watch the bonus features on the last disc, I usually don't bother, but there is a short film about the real men of Easy Company and its very emotional!!

Watchable Mini-series, but rather one-sided - Band of Brothers review by PV

I think this series is well-filmed and acted, but, to be honest, I preferred The Pacific, made years later by the same team. Why? Well, perhaps because the Pacific war was largely Americans fighting; whereas, the fighting in Europe was not - though Band or Brothers and all other American films try to make out that WWII as Germany V the USA! I understand that the whole focus has to be on a few men, but, nevertheless, I think it's wrong and somewhat offensive to do that - especially since the USA didn't even enter the war until over 2 years after Britain had been fighting! There are a couple of moments in this where things that go wrong are blamed on 'limeys' - despite the massive sacrifice of the British and Canadians at Arnhem and elsewhere. As always, the Brits are ONLY ever portrayed as upper class twit officers, except for one mockney private! I think that those who are not very educated about WWII will be misinformed by this TV mini-series really, and that's a shame and wrong. I did however like the well-filmed scenes and also the muddy morals of it all: US soldiers looting, and casually killing Germans who surrendered, for example, and drunken yanks crashing cars after the war's end. But I still preferred The Pacific as a drama. I thought the ending was great though - not the usual American saccharine sentimentalism.

I could have done without the immodest prologue from the veterans. I was however taken back by Schwimmer's acting. About as different as conceivable from the "canned laughter every 4 seconds" that we are used to. Very believable and at times intimidating to watch. Some of the other acting however was on a level with Bilko. Generally however emotional and compelling.

One of the most beautifully filmed and well put together television shows and one of the best war dramas I've ever seen. It introduces you to an ensemble cast, most of whom have done small to medium time drama in the UK or the US, and you follow the men through training, D-Day and right up to the end of the war. The casting is generally excellent and the lead, Damian Lewis, is someone you'll find an affinity with from the start.

The action sequences are absolutely spectacular and on are at least on a par with any second world war film I've seen. The action is quite visceral at times and some episodes may not be for the squeamish. Most of all the emotional content is superb and by the end you really feel the bond between all the characters and all the events they've been through together.

The Blu-Ray quality is excellent save for some grainy moments in the last episode and the special features mainly involve commentaries from the veterans involved, which can be quite heart-wrenching to watch at times.