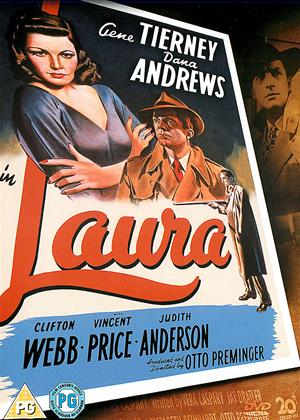 Another in the film noir genre that could give you lung cancer just by watching. Everybody smokes, and how come they always find an ashtray when they flick their cigarettes away? Dana Andrews plays the trench coat detective who seems to work entirely on his own apart from the phone tapper in the basement and the guy on the door. He falls for the victim of murder who is not a victim (almost a spoiler) via her portrait. This is Laura of the title played by Gene Tierney who looks gorgeous in some classy outfits and very silly hats. (Vincent Price looks like he might be set to be typecast as the male dumb blonde.) The sets too, are gorgeous, it's maybe why you went to the cinema in 1944, to see how the other half lived and loved, and killed. There are some definitive lessons from Otto Preminger for modern directors. Yes, a single shot can last longer than three seconds, there can be passages in which there is no dialogue and the camera just lingers, and a murder/detective story can be effective with little noise, three or four punches and one gunshot.

The Lamps! The Lamps! Get a load of the Lamps - Laura review by JK

More twisty than a switchback, the plot keeps you on your toes throughout. Like other reviewers have said before, when someone gets duffed up we all know what's happened without it having to last ten minutes and involve buckets of tomato ketchup. There is no need for sound effects, grunts etc. The same with sex: When two (possibly more - it's a liberal world) go into a room and the door shuts we're fairly sure they're not listening to The Archers.

Beautifully shot - boy, when it rains it really rains (despite the fact that nobody's raincoat drips or they leave wet footprints on the carpet)

Gene Tierney's outfits are to die for. Cross-cut, figure-hugging dresses and she wasn't a stick insect like so many of today's models appear to be. The one big BUT were the lamp shades. If you thought the hats were silly you had to get a load of the lampshades..... oh... and the ridiculous suits the men wore (but that may have been the ratio we were watching the film in were everyone is five feet two with gigantic shoulders and trousers with enough material to fill a schooner sail.)

Back to the lamp shades; Many of them defied description - tarts knickers atop what appeared to be the model of an industrial power station. Gene Tierney's apartment made B+Q look positively tasteful.

Another plus point was that you could hear every word every character said. Each word was perfectly enunciated so we could actually understand the plot - unlike today's films where one has to decipher what may be going on between the mumbled dialogue, the ridiculously over-loud sound effects, the music that has nothing whatsoever to do with the plot but was probably a pop record the producer's daughter liked and the deafening CGI effects.

And finally - the gorgeous music. 'Laura' the theme tune so wonderfully understated but introduced with such subtlety that it imprints itself as a fabulous ear worm for the rest of the night.

This film is deservedly a classic even if it creaks in a couple of places.

Agree with above! - Laura review by Oli

Really great film, I'm probably going to watch it again tonight as it is a really special film, one of a kind really, it does have it's moments that are a bit long winded, and some annoying characters (Bessie namely) But Dana Andrews, Gene Tierney and Clifton Webb make this film a memorable experience, you come into the film with Dana Andrews intruiging detective speaking to Clifton Webbs peculiar journalist, he has a short chat with him, the journalist ends by telling him he actually knows the detective and admires a case he worked on, the detective really takes no notice of this and carrys on as usual, then presumes to tell him he will naturally be one of the main suspects. The rest of the film unfolds in brilliant fashion, and I have to say I didn't see the twist coming about half way through, it is a really dreamy experience that keeps you on the edge of your seat. Sure it has it's flaws but they are outweighed by the powerful story and by how it unfolds. Like JK said the theme is as nice a piece of music I have ever heard on film. I agree as well films don't need blood and gore to be powerful, a door shutting, the 2-3 gunshots in a brilliantly fascinating story is as good as anything.