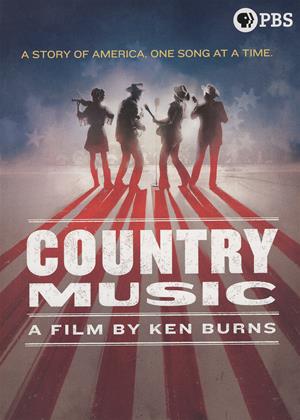 Synopsis:
Ken Burns's eight-part, 16-hour documentary series, 'Country Music', chronicles the history of a uniquely American art form, focusing on the biographies of the fascinating characters who created it. More than eight years in the making, the film follows the evolution of country music from its diverse and humble origins as it emerged, by the end of the twentieth century, into a worldwide phenomenon. Filled with memorable musical moments, interviews with more than 80 country music artists, and evocative footage and photographs - many never seen before - it weaves an unforgettable story that is both intimate and sweeping. No one has told the story this way before.

1. The Rub (Beginnings - 1933)
After centuries of percolating in America's immigrant and racial mix, particularly in the American South, what was first called "hillbilly music" begins reaching more people through the new technologies of phonographs and radio. The Carter Family, with their ballads and old hymns, and Jimmie Rodgers, with his combination of blues and yodeling, become its first big stars. Rodgers' career ends when he dies young from tuberculosis.
2. Hard Times (1933-1945)
During the Great Depression and World War Two, country music thrives and reaches bigger audiences. Gene Autry sets off a craze for singing cowboys, Bob Wills adapts jazz's Big Band sound to create Texas Swing, and Roy Acuff, a singer on the Grand Ole Opry, becomes a national star. Despite a divorce between two of its members, the Carter Family carries on, turning out songs that will become classics.
3. The Hillbilly Shakespeare (1945-1953)
Country music adapts to the cultural changes of post-war society. Bill Monroe, Lester Flatt, and Earl Scruggs transform traditional string band music into something more syncopated: Bluegrass. Out of the bars and juke joints comes a new sound with electric guitars and songs about drinking, cheating, and heartbreak: Honky Tonk. Its biggest star is Hank Williams, a singer and songwriter of surprising emotional depth, derived from his troubled and tragically short life.
4. I Can't Stop Loving You (1953-1963)
In Memphis, the confluence of blues and hillbilly music at Sun Studios gives birth to "rockabilly", the precursor of rock and roll. Elvis Presley and Johnny Cash are at the forefront. Rhythm and blues star Ray Charles surprises the industry by deciding to record an album of country songs - showing that music travels in both directions across the nation's racial divide. Nashville has become Music City USA, and in its recording studios country music's twang is replaced by something smoother: the Nashville Sound. Patsy Cline is becoming one of its biggest stars when her life is cut short by an airplane accident.
5. The Sons and Daughters of America (1964-1968)
During a time of cultural upheaval, country music reflects the profound changes in American society. Loretta Lynn writes and performs songs that speak frankly on behalf of women everywhere. Charley Pride becomes a country star when people respond to the quality of his voice instead of the color of his skin. Merle Haggard comes out of prison to become the "Poet of the Common Man". Johnny Cash's life and career descend into the chaos of drug addiction, but he finds salvation through a landmark album recorded at Folsom Prison.
6. Will the Circle Be Unbroken? (1968-1972)
With the Vietnam War intensifying, America is more divided than ever. Country music is not immune to the divisions. Kris Kristofferson abandons his military career, becomes a janitor in a Nashville studio, then a writer whose lyricism sets a new standard for country songs. Bob Dylan, the Byrds, and other non-country artists find Nashville a creative place to record. And a hippie band from California, the Nitty Gritty Dirt Band, creates an iconic album with older country artists that somehow bridges the gap between the generations.
7. Are You Sure Hank Done it This Way? (1973-1983)
Defining country music is debated as never before, and the argument sparks a vibrant era. Dolly Parton crosses over to mainstream success to become the most famous woman in country music. George Jones and Tammy Wynette seemingly live out their songs' tragic lyrics - and create musical masterpieces. Hank Williams, Jr. and Rosanne Cash each emerge from their famous fathers' enormous shadows. Willie Nelson finds creative freedom in Texas, and with Wayion Jennings launches the "Outlaw" movement. Emmylou Harris bridges folk and rock and country music and influences a new generation of artists.
8. Don't Get Above Your Raisin' (1984-1996)
As country music's popularity skyrockets, the genre confronts the question of whether it can also stay true to its roots. The success of the "New Traditionalists" - Ricky Skaggs, Reba McEntire, George Strait, Randy Travis, the Judds, and Dwight Yoakam - suggests it can. After first being turned down by every label in Nashville, Garth Brooks explodes onto the scene. And an aging Johnny Cash returns to a studio with just his guitar and his unforgettable voice to record a series of albums that cements his place in the industry he helped to create.
Actors:
Peter Coyote, Marty Stuart, Garth Brooks, Rosanne Cash, Brenda Lee, Loretta Lynn, John McEuen, Dolly Parton, Charley Pride, Hank Williams Jr., Carlene Carter, John Carter Cash, Rodney Crowell, Merle Haggard, Tom T. Hall, Emmylou Harris, Jan Howard, Betty Johnson, Jeannie Seely, Ricky Skaggs
Directors:
Ken Burns
Producers:
Ken Burns, Dayton Duncan, Julie Dunfey, Craig Mellish
Writers:
Dayton Duncan
Aka:
Country Music: A Film by Ken Burns
Studio:
PBS
Genres:
Documentary, Music & Musicals, Performing Arts, Special Interest

I wish I could give this more than 5 stars! What a joy this series is!

Too many people in the UK have held snobbish attitudes to Country music. Let's hope that this brilliant documentary helps to break that down even more.