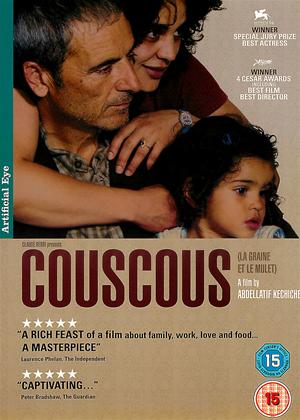 A very short review of this film, in total contrast with the actual film which is a meandering 2 1/2 hours long.

Nothing really happens......for 2 1/2 hours nothing actually happens of interest. The characters, while excellently acted are irritating to say the least, even the lead who we are supposed to feel sorry for. They argue and bicker for 15 minutes at a time, usually about potty training, affairs or couscous. And so on to the couscous which is like a centerpiece to this film. The mother figure is suppose to cook the best couscous ever. Well it looks awful, soggy veg on dry couscous so when the characters talk about how delicious it is its really hard to believe. And the characters do talk about it alot, usually at the same time as shovelling it in their mouths....lots of open mouths stuffed with this food, and lots of dribbles down chins.....rank.

I wont tell you about the story because its really not there. Lots of awful eating habits and lots of boring bickering.

Couscous is a fine example of the family drama that the French seem to produce without too much effort. It follows the complex life of an ageing boat worker who slowly realises that his particular skills will no longer be able to provide for his extended family. His life is a messy web of relationships and friends, most of whom you'll get to meet during the course of the film. In fact you feel as if you are on first names with most of the town by the finale. Food is evident everywhere and the family meal is vitally important, soon you'll feel stuffed from watching fish and couscous being eaten. The film length also feels bloated, warranting a decent edit, as when the end comes its almost a relief, when Couscous deserves better. Moderation is called for, too much of a good thing is never successful.

I am a great fan of world cinema but this is pretty dire. Some good dialogue at times but needed a good edit and new scriptwriter. Ends bleakly with no clear idea of where the film was going. Give it a miss IMHO