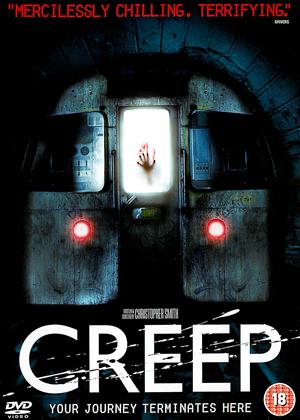 Synopsis:
London, midnight, on a cold evening. Unable to find a taxi, Kate (Franka Potente) heads for the Underground. She takes a seat away from the crowd of late-night revelers and waits for the last train. Before long she drifts off to sleep and wakes to find everyone gone. She momentarily panics until another train pulls in. She boards, unnerved that she's the only passenger but relieved at last to be on her way. Halfway through the tunnel the train jerks to a violent halt. The lights shut off and the train is plunged into darkness. Kate screams: she is trapped, in the dark and she is not alone...Her nightmare has only just begun...
Actors:
Franka Potente, Sean Harris, Vas Blackwood, Ken Campbell, Kathryn Gilfeather, Grant Ibbs, Joe Anderson, Jeremy Sheffield, Sean De Vrind, Ian Duncan, Debora Weston, Emily Gilchrist, Craig Fackrell, Elizabeth McKechnie, Kelly Scott, Strapper, Jonathan Taylor, Paul Rattray, Morgan Jones, Daniel Joseph Scott
Directors:
Christopher Smith
Writers:
Christopher Smith
Studio:
Pathe
Genres:
British Films, Horror, Thrillers
Countries:
UK

Slightly different storyline to your usual horror flick. At the end of the day, typical scary horror - if you like horror then I recommend it.

Would say this film is mediocre, takes a good 30 mins to kick in and is a not a great horror film watchable but thats about all

When a young lady falls asleep on an underground tube station bench and gets herself locked in, all thoughts of a liaison with George Clooney are soon forgotten as she soon realises that she's locked in and what's worse she isn't alone.

It's definitely not her lucky night as she is almost raped by a guy from the same party that she has left early, only to be saved as he is dragged screaming off the train she's on. She realises that her would be attacker is in serious trouble, and if he is then so is she.

What follows is a dark, moody and tension filled battle for survival as she struggles to last the night and make it back to the daylight world above. The odds seem stacked against her but she discovers that she isn't the only one being hunted by someone, or something that stalks the tunnels of the underground.

The film will have you jumping for real and I advise don't watch it with the lights out! Well only if you are very very brave!

Joking aside I cannot stress that this is a very very good scare flick and it had me on the edge of my seat. It's not an original idea as another low budget movie made in the 60's or 70's had a similar idea but don't let that put you off. And I am very suprised that it hasn't got more stars than it has already.

Kate, the central character in ‘Creep’ reminds me a little of Naomi Watts’ character in ‘The Ring (2002)’, in that she is so brash and mean-spirited it is difficult to warm to her. She not only declines a polite plea from a homeless man for some change, but patronises him too, and seems pleased with her spite. Possibly this is to highlight the irony of being mistaken for a vagrant herself, bloodied and filthy as she is by the film’s end.

The plot? Horrible bloke kills people by a train-line. It’s something that has been attempted similarly countless times over. And yet I absolutely love this. It is laced with good characters (often more likeable than the heroine) and given some really nice touches – and that is before we’ve even met the wrecked, unsightly killer.

It is a little unclear as to what exactly ‘Craig’ is, although there are plenty of partial clues. Is he a survived abortion, the result of an illegal experiment, or something else? The specifics don’t really matter because he is a powerful character in his own right, often due to the ticks and painful movements Sean Harris brings to the part. He glances at a selection of pickled foetuses in the abandoned medical facility where he lives, and hears the sound of babies crying in his mind. Equally, in one of the most effective scenes, he straps homeless victim Mandy (Kelly Scott) to a delivery chair and goes through the motions of a surgeon before disembowelling her. It’s all grim and extremely effective.

As with many things, there are logical shadows cast over this – Craig has been alive a long time and presumably these are not the first people he’s killed. He shows no intention of covering his tracks, so why hasn’t he been apprehended by now? Also, Kate has the advantage over him on two separate occasions before she finally kills him.

Filmed in brash, early morning tones – all sickly yellows and blues, it’s a persuasively shocking production, but at least Craig’s eventual demise seems permanent. A shame, actually – a sequel would have been welcome.