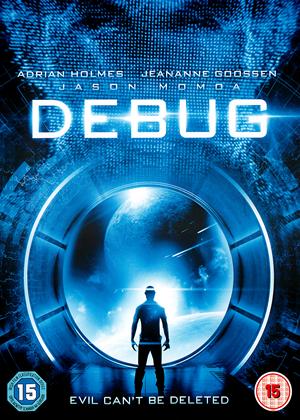 I love David Hewlett. I have loved him since seeing him on Stargate all those years ago, and I even got an autograph from him once. So, when I heard he was making another film, I just had to check it out. Having seen bits and pieces of his process (from youtube, twitter postings, etc.), I still didn’t know what to expect. Well I needn’t have worried, because Hewlett has made an epic film and I have given it a rightful score of 4/5.

Debug is a film that follows six 20-something year old computer hackers whose job sends them aboard a broken and abandoned space freighter. But it is not as empty as they thought. The hackers are forced to fight for their lives against an AI (artificial intelligence) that is desperate to become human, and will kill for the chance.

Having been a fan and a part of science fiction projects before, David Hewlett has seen how it is done, and he knows how to improve upon it. Debug is an awesome film that is scary, intelligent, and one you can’t miss.

The casting was also brilliant, bringing a mix of known-actors and fairly-newcomers. Like with his first film A Dog’s Breakfast, Hewlett has been able to get actors and actresses he has worked with before to take on these new roles. Jason Momoa (who plays the AI), is the same as we have seen him before - i.e. a fighting baddie - but still different to what he has done before. His growing popularity from Game of Thrones should also help bring more viewers as well. Kate Hewlett (David’s acting sister) is also brilliant, and it is awesome to see the siblings working on another film project together.

Hewlett has also written a smart script. It deals with current issues and worries we have about technology and where the line then comes between human and machine.

It does have some violence and blood, but it shouldn’t be enough to dissuade anyone from watching it.

With the reach and reliance on social media growing more and more everyday, Hewlett has grabbed hold of this and really connected with his fans. He has talked about the film - which he is rightfully excited about - and has made everyone feel as though they have been included in the process. This makes you more inclined to see it.

There have not been many reviews yet, but what is out there have been quite mixed. It may not be the newest idea - Hewlett said he watched 2001: A Space Odyssey when he was younger and wanted to make a film from Al’s perspective - but Hewlett has made enough changes to make it different and relatable to viewers of this generation.

There are no two ways about it: you must see this film. Hewlett has done a brilliant job of transitioning behind the camera, and he knows what he is doing. Check it out and be entertained!