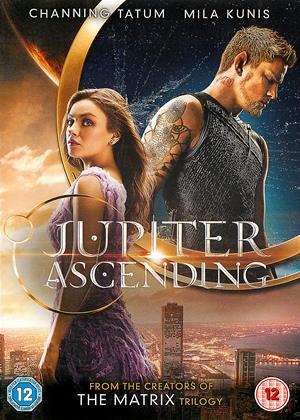 I watched this film with very low expectations (due to numerous bad reviews) and to be honest it was some good looking chewing gum for the eyes.

Other reviewers have stated that the plot is confusing - it isn't, it's actually quite simple. The problem with the film that it doesn't really explore any of the characters in depth and doesn't have any depth to the background of the plot or much in the way of sub-plots.

The film just lives in the present and is quite nice to look at.

I think the major disappointment to many people was that they were expecting more depth, something grand and it just isn't.

This movie is right up there with Disney's John Carter.

It is very confusing trying to work out what is going on when you first watch it, and only after you know what it is about and watch it again do you begin to enjoy a decent sci. fi movie.

It's failing, like John Carter is that it is aimed at young kids (rated 12 ) and they will have no idea what is going on and most probably will have lost interest within 15 - 20 mins.

I enjoyed this but its probably a film that I wouldn't watch again and a film that I will forget. I did think like another review said , it was aimed at to young a person. I found the story confusing like others . An ok SciFi but probably better out there.

The Matrix saw the Wachowskis bring philosophy into the modern film goer’s perspective and the underrated Cloud Atlas again developed their political philosophy world-view. This meant that all should be well for their assault on Sci-fi in Jupiter Ascending.

Visually Jupitar Ascending is visually pleasing but that’s really where the good things end. The story seems to borrow from every past sci-fi film especially reminding me of Dune. Basically the story is 'time' is the most precious commodity in the universe. Humans were not born on earth but occupied the vastness of space. Planets were inhabited so millennia later they could be harvested of people to produce a DNA substance that is sold on the market.

Its problem is that the story is clumsy told and does jell together correctly. Some have said that the film is a Wachowskis take on capitalism or their views on gender however I did really see any of this in any of the film. For me what makes it more annoying is the film score that is near constantly in the background, over dialogue, over the crashes and bangs. Whatever can be said about the film the Wachowskis need to learn that sometime less is better. I prefer loud bangs, crashes and explosions rather than the musical score blasting in my ears.

Its a film that could have been great but in the end becomes rather mediocre.

So bad I started crying. - Jupiter Ascending review by MW

Okay. Confession time. I don't think you should review a film unless you've watched it all. But I just couldn't bear to watch it to the end. It's rare for a film to have no redeeming features whatsoever, but this comes close. Worst of all was Eddie Redmayne, whose performance reminded me of Uncle Monty's drunken turns in Withnail and I. The story was seemingly written by an eight year old asked to write a sci fi film as detention. Boring CGI throughout and Sean Bean complete with Yorkshire accent as an intergalactic soldier/cop exiled to Michigan to raise Bees. Indoors?????? Utterly dreadful.

Can see why it bombed. Special effects and CGI were appalling to say the least. Confusing storyline and awful script. Could not wait for the film to come to an end. It was that bad.

This is a bunch of special effects in search of a film. There’s even the standard cartoonish spacecraft chase that’s as boring as anything in the Star Wars franchise. Channing Tatum and Mila Kunis lack star quality. The backstory is so ridiculous and jargon-filled that the main function of our insipid heroine is to ask questions about it so that other characters can explain it to the audience. The direction is staid. The score is laughable generic muzak.

The Wachowskis (writers and directors) have previous but this is their worst project yet. The whole adds up to two boring hours you’ll never get back.

Entertaining enough as a Family Movie, this isn't really what it looks like. More for the Kids than anyone .

Imagine mixing Return to OZ with Dune and you are pretty close .

All a bit Disney Princess from Modern Day Chicago lost in in Space and a bit Tacky.

Nice looking Special Effects but the story is childishly naff.

Enjoyed every minute of this Si Fi Romp. A courageous enterprise. - Jupiter Ascending review by Moppis

They were really trying for something different here. All the cast gave it there best shot. It is so courageous that the producers and directors are willing to create so much fine details of other worlds and risk so much to give this amount of pleasure to people. Fell in love with the robot Gemma Chatterjee; which can't be bad.

The legacy of the Wachowski directing duo is rather impressive given their projects and their budgets. Over the last seven years, they’ve made three very different films with massive budgets toppling over $100 million. Every single one of them has been a box office bomb. After the merchandising disaster of Speed Racer and the polarizing performance of Cloud Atlas, you’d expect producers to pull the plug on their effects-heavy sci-fi project Jupiter Ascending. Yet here they are with yet another original and visually stylish effort that defies Hollywood convention and fiscal constraints. While it’s certainly the weakest of their current production, I have to admire their tenacity in carving out a filmography they’re more than pleased to have.

Jupiter Ascending could be considered a bit groundbreaking in how it weaves the sci-fi wish-fulfillment tale for a female audience. Mila Kunis plays the awkwardly named Jupiter, a woman born into a crowded family of Russian immigrants. Her tightly packed workdays involve working alongside them as they wash floors and scrub toilets for wealthier individuals. But her wish for more from the stars comes true when elf-eared alien Caine (Channing Tatum) rescues her from some species of nasty alien grays. After a series of chases with hovercrafts and shootouts with laser pistols, Caine reveals the bulky truth to Jupiter. There’s a whole bunch of intergalactic politics going on, but the short version is that Earth is a harvesting planet for the secret of youth to some intergalactic royalty and Jupiter is a key player of the project. Thus begins an adventure packed with plenty of unique creatures and detailed starships to make Star Trek blush.

While all this sounds like a blast, which it visually is, there’s a certain unnatural grace to how it jumps into the sci-fi elements so quickly and lacking in wonder. Remember how amazing it was for Harry Potter when discovering the world of wizardry for the first time? Mila Kunis’ character doesn’t really display much of any astonishment or confusion about being hunted by intergalactic bounty hunters. With her emotionless face and ill-written character, Kunis just doesn’t seem like a good fit for a role that’s a mix of damsel in distress and kick-butt warrior princess. Even Channing Tatum doesn’t have much to work with as a stoic bodyguard and obligated love interest. At least they’re both on the same level of talent so there’s that odd bit of chemistry to their relationship.

The supporting cast is leagues ahead of the leads in how they play up the roles. Eddie Redmayne is the real scene-chewer as the snobbish villain Balem - whispering with rage and a pouted bottom lip. Sean Bean barks and growls as Stinger, the grizzled veteran of much space conflict. Even Nikki Amuka-Bird in a minor role as the order-shouting ship captain Diomika really sticks out in my memory far more than Kunis or Tatum. Why do the two of them just seem to be so dead-faced for a woman who discovered she’s a space princess and a man with antigravity boots? One of the few moments where Kunis displays some amount of wonderment is when she discovers she can control the bees. Spaceships, hover-cycles and regenerating buildings do nothing for her as she just sort of goes with the flow all too easily. Either her character needs to be better written or Kunis needs some more experience acting for the green screen. You could at least pretend to be amazed by the giant starships that are not really there.

It’s amazing she’s not more impressed as the visuals are unparalleled to any other science fiction film out there. Every shot off Earth is packed with all sorts of unique designs, spaceships and alien creatures. I especially enjoyed a sequence where Jupiter goes through an intergalactic bureau with a robotic assistant who grows irked with compounding layers of paperwork. It’s a simple scene of jumping through different hoops quickly, but lavishly detailed with many different characters, currencies and languages. It just goes to show how much thought the Wachowskis put into crafting their own cinematic world. And it’s hard to argue with the creativity behind the mid-air chase through an evening city scape. There are some amazing stunts for this well-shot sequence that apparently took six months to film. While I grew restless with their acting, you have to admire the tenacity of Kunis and Tatum to commit that much time for a meticulously assembled portion of film. They’ve got the bodies for the job even if they lack the expression.

Jupiter Ascending is the movie I want to love, but just can’t bring myself to that point. I’ve admired the work of the Wachowskis for a long time, but I’m afraid they’ve lost some of their magic this time around. Their visual flair isn’t gone, but their human element is sorely lacking from such lifeless leads. But, as with all Wachowski productions, it’s destined to go down as a cult favorite simply for its female twist on an old template. This is what makes the Wachowski duo so brilliant as filmmakers - doing the stories they want to do with a blockbuster budget usually reserved for superhero and epic war productions. They may have crafted a flawed romance, but failing at creating something different is better than just phoning in the usual. I eagerly await their next film which is sure to be both an original script and a visual treat.