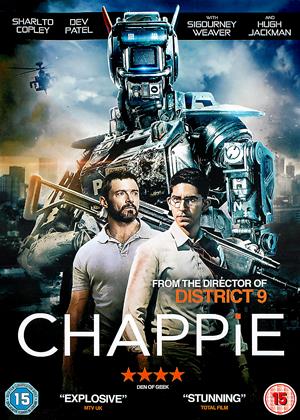 I loved District 13 and the way it showed the rest of the world what living an an apatite was like.... well that's my interpretation anyway.

Elysium no... didn't like it we all know the gap between rich and everyone else is growing bigger and whilst this film addresses that I just didn't like the way it was portrayed.

So Chappie I get this film... helps I love Robots... not in a physical way but I really like them... the underlying story is how quickly innocence can be turned to violence. How many times do we see children carrying weapons in Africa and South America on our news channels?

Chappie is very funny... very honest... very clever and in some parts really bad mostly it must be said Hugh Jack man what we're you thinking... seriously did you see this film before it was released. Back to the film the last 10 minutes is what sealed this film for me... not to give away too much but Chappie is a genius.

Watch this film expecting it to be rubbish and you'll find yourself loving it... but it's a niche film and not to everyone's taste...

Really enjoyed this film good story . In the future theres a robotic police force helping to fight gangs. A programmer developes a new programe with feelings and intelligence, that gets stolen by a gang and used for crime. It kept me interested all the way through.

Disappointing, derivative stuff - could have been so much better. - Chappie review by RP

With the pedigree of director Neill Blomkamp ('District 9') and a load of well-known actors and with the (potentially) intriguing premise of a sentient law-enforcement robot I was looking forward to an exciting, interesting sci-fi film, perhaps along the lines of 'Robocop' crossed with the recent 'Ex Machina'. But no - it was yet another disappointment.

The production values are high, the locations well chosen, the motion capture CG FX for Chappie the robot was good - so a good start. But oh dear, the storyline is dire and full of plot holes and technical stupidity. The big-name actors (Sigourney Weaver, Hugh Jackman) seemed entirely miscast and Dev Patel (he from 'Slumdog Millionaire') was an awful choice. And I can well believe that the grossly incompetent 'gangsters' with whom Chappie fell in were indeed played by inexperienced actors - they were dire.

I spent some 10 years working on knowledge based systems, including machine learning, and my usual reaction to the typical movie treatment of any kind of computing, let alone anything about AI, is to cringe at the inevitable inaccuracies. This film shows an embarrassingly poor grasp of the technical realities of robotics, of AI, of computing, of software development, of security and risk management - indeed, of any kind of professional industrial-scale computing. Yes, I know it's a drama, but it's a continuing disappointment to me to have my worst expectations of the movie treatment of computers continually met.

If your expectations are low, you might enjoy this. If you're looking for something good, see the original 'Robocop' (not the disappointing remake) or the excellent 'District 9' and give 'Chappie' a miss. 2/5 stars - disappointing stuff.

Basically a bit like the old Short Circuit films, but with the whizz graphics that gives it the big upgrade.

Better name for this film would of been Crappie, poor story line, awfully bad acting, especially by the baddies and the others were not much better. Gave up just over halfway through.

The ultimate in moral confusion? - Chappie review by PM

Hey I know it's just a bit of fantasy, but there is not one thing I can think of that I enjoyed about this film, and so many lazy corrupt stereotypes that it's difficult to imagine how the censors gave it a certificate at all

Neill Blomkamp has become one of the most frustrating new directors that is on track to be another one trick pony. He amazed audiences in 2009 with his original and stunning sci-fi piece District 9. Shot for $30 million in South Africa, it was an astounding picture that really turned heads with its unique alien tale and eye-popping effects for such a budget. But when given $115 million for his second film Elysium, he did little to improve his writing or expand his scope. I was willing to write it off as studio meddling as Bomkamp has claimed, but his third film Chappie has made me reconsider.

Here we have yet another tale of future science fiction taking place in Johannesburg, South Africa and with another smashed-into-the-ground allegory. This time it’s the old Pinocchio tale of a robot who wants to learn and be a real boy (or at least transfer his consciousness into a better robot). Robotic weapons engineer Deon (Dev Patel) is proud of his police robots that have lowered the crime rate of Johannesburg, but is more infatuated with his experiments on artificial intelligence. With the weapons manufacturing company not interested in his newfound discovery of original thinking robots, Deon swipes a to-be-destroyed robot from the bin and prepares to breathe life into a machine. But since having a talking robot interacting with a scientist would be boring, Deon’s experiment is captured by criminal pair Ninja and Yolandi (played by South African singing duo Ninja and Yolandi Visser). Their goal is to make Deon program a robot to do their bidding which, of course, involves crimes for monetary gain.

When the robot is awakened and dubbed Chappie (voiced by Blomkamp staple Sharlto Copley), he’s the scared little puppy you’d expect for one just being born. With Ninja’s harsh tone and Yolandi’s baby voice, he quickly takes to the criminals as mommy and daddy with Deon being seen as his god. He slowly begins to learn about the world, speaking his first digital words and joyfully speaking them in the cute affectation of a small child. I’ll give Bomkamp credit for nailing the vocal mannerisms of a small child the way Chappie seems ecstatic to know everybody’s name and read a book that he can claim as his own. These scenes would be rather sweet if the rest of the film weren’t so dirty and brutal in its depiction of Chappie’s education. At one point Chappie is violently beaten by punk kids and set on fire - sending him back into the arms of Yolandi with a frightened mentality and a questioning of humanity. I’d feel bad for the CGI character if his development wasn’t as artificial as he was.

Ninja intentionally teaches Chappie all the wrong lessons and lies to his face in the name of threatening others and stealing cars. Deon tries to convince Chappie he is more than a weapon, neglecting to mention his limited battery life of a few days. And, of course, there’s the vindictive engineer Vincent (Hugh Jackman) who favors bigger weapons over touchy-feely robots. Early on, we’re introduced to his bulky mechanical war machine that he’s itching to send out into the field. It’s teased so many times in the picture that it's rather underwhelming when it’s finally revealed as a bloated ED-209 from Robocop. Blomkamp doesn’t even try to hide this fact as the mecha monstrosity matches the jerky movement of ED-209’s stop-motion special effects.

For what it’s worth, the special effects of the titular character are rather impressive given the budget being half that of Elysium. If there’s one thing Blomkamp does perfectly more than any other sci-fi director, it’s his uncanny ability to mesh fully-articulated robots into a live-action film. The way Chappie interacts with every human character, touching some and threatening others, always managed to hold my attention. But this is a muscle Blomkamp has been flexing for far too long in each of his films. Computer graphics have now reached a point where it’s no longer a question of “how” as it is “what” you do with that technology. Blomkamp has the skill to direct, but he needs a better story to work from given that this is the third one he has wrote. Is he that afraid to pursue something outside his safe zone of simple allegories within South Africa? Somebody really needs to hold his feet to the fire as this man was once a promising director who now appears to be holding himself back.

The sad truth is that Chappie does little more than rehash Neil Blomkamp’s template with a thick coating of Robocop and Short Circuit. Combining several aspects of both those films, it’s a messy movie that never truly delivers on the charisma of Short Circuit or the tongue-in-cheek tone of Robocop. One moment we’re watching Chappie paint a pretty picture with curious enthusiasm, the next we’re watching him carjack people with a threatening tone. Ultimately, he becomes a super-smart being that has mastered the fine art of brain switch. The Iron Giant this being is not. Chappie exists as a clunky collection of sweet movie robots, appearing more as a subject of marquee value than true personality. For all its cute and visuals, Chappie doesn’t have many original thoughts in its head.