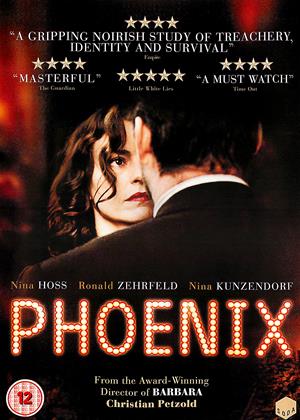 A masterpiece - Phoenix review by PJ

One of the best films I have ever seen. It is very deep in that German kind of way, but also captivating and intriguing. If our physical appearance changes, are we the same or are we different? Can others recognise us? If they loved us before, can they love us now? What if they never loved us, even before? What does it mean to be someone (or someone else)?

It shows post-WWII Germany in a state of deep shock and trauma, and how they dealt with the Nazis among them. Who betrayed whom becomes clear as the plot unfolds.

The acting is very good and the film is never boring, even though you can read it on many, many levels, including the purely historical one.

I don't understand why this film is so highly rated by critics. It tells the story of a holocaust survivor who, after receiving plastic surgery for a face wound, returns to Berlin after the end of WW2 to find that it was her husband had secretly divorced her (was that possible?) and then betrayed her to the Nazis. The husband assumes that his wife is dead (for no obvious reason), and doesn't recognise her despite her minimally altered face, her voice, gait, and handwriting. The wife doesn't tell him her true identity (again for no obvious reason) and he plots to use her to seize his wife's inheritance. I won't spoil the ending, but I assure you that it is not worth waiting for.

The pacing is very slow and the plot rather implausible. I suggest you watch something more interesting, like paint drying.

This film is not awful at all, BUT it does stretch our belief to the limit - and brings to mind other mistaken identity dramas, like MARTIN GUERRE et al,

Having said that, it's a nice little character piece - though way too long.

The slight story simply does not have the meat on its bones for make a full length movie meal; it could easily have been a TV drama of 30 or 40 minutes.