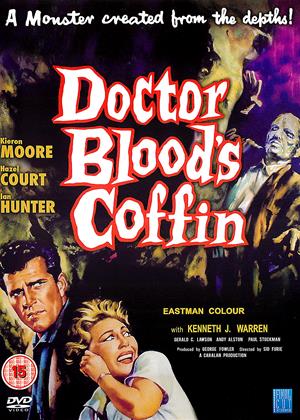 Initially, I was surprised this was made as early as 1961. Its graphic content, misty Cornish locations, promotional features picturing a lurching zombie, and lurid title seemed more like a production from in early 1970’s (Sergeant Cook is played by Kenneth J. Warren, known for 70’s horror flicks ‘I, Monster’ and ‘The Creeping Flesh’). As such, I’m surprised it made such little impact.

Also surprising is the fact that the lead character is actually called Doctor Blood (Peter Blood, played by Kieron Moore). Horror veterans Hazel Court stars as Nurse Helen and Paul Hardtmuth is briefly seen as Prof. Luckman, both actors previously having starred in Hammer’s ground-breaking ‘Curse o0f Frankenstein (1957).’ One of the cameramen is no less than Nicholas Roeg, who went on to direct horror classic ‘Don’t Look Now (1971)’ amongst other things.

Dashing Irish actor Kieron Moore plays Blood, a character tailor-made to be the hero of the piece, but turning out to be the crazed villain. He’s very good, especially considering he is playing against type. Also, the contrast between sunny, beautiful Cornwall and Blood’s unwholesome experiments is effectively realised.

More reminiscent of films of this period (especially the more mannered Hammer entries), however, are that the shocks are reserved strictly for the final act, where the magnitude of Blood’s delusion is given free reign. Up until then, we have an engaging enough drama, with Court in particular keeping the interest alive – sadly free of scares until the finale, which is great, but too brief.