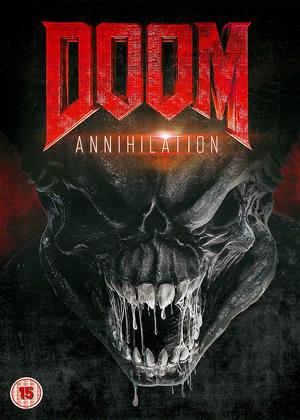 I haven't seen a film so boring in a long time.

the characters are so one dimentional you don't care if they get killed, (and all but one does.) the plot is weaker than the forst Doom which was so much better, and the ending was so terrible and predictable I saw it a mile away.

Do yourself a favour, don't bother.

Video game movies have come a long way from the days of being messily assembled pictures to capitalize on the gravy train of gaming. 2019 saw the likes of Detective Pikachu and The Angry Birds Movie 2 rising above the stigma that video games are not as critically seen. They took their gaming franchises and found interesting routes to go with character, style, and storytelling. Doom: Annihilation is not one of those movies.

No, Doom merely snuggles back into that tired cocoon of fitting a ho-hum sci-fi action picture of cheap and predictable trappings. It follows the story of Doom almost too closely, to the point where it feels more like those cheesy FMV cutscenes of yesteryear. In the future, a science facility in outer space is testing the possibility of a Star Trek-style transporter. The only problem is that transporter seems to take a detour through hell itself and transforms anyone who goes through that portal into vicious zombies. Then demons start coming out of the portal.

Can I just say how tired this all sounds? How come whenever humans ever seem to make contact with another dimension in a horror style plot it must always be hell? Haven’t we gotten over this goofiness that simply couldn’t be topped by the likes of Event Horizon? I say this only because the Doom franchise in previous years has managed to find a firmer footing in remaining relevant as more than just the grandfather of first-person shooters. The latest version of Doom released on PC is a lot of fun for being fast-paced, strategic, and bloody gorgeous.

Everything in Doom: Annihilation is the exact opposite. From the even lighting of the facility to the cheapness of the monsters, there’s little present within such a film to separate it from the myriad of B-movie trash that litters the SyFy Channel. You may have noticed I haven’t talked much about the characters. There are no characters; only players on the board. A handful of rough and tumble soldiers arrive at the science facility and have to survive their stay while slaughtering all the zombies and demons. Some mild pathos is thrown in but it’s the usual space marine slasher formula. One character will sacrifice themselves so others can escape, another will go down screaming with guns blazing, and another will just kinda unexpectedly so the Final Girl trope can be completed.

Even Annihilation’s fanservice, which you would think the filmmakers would bank on for a film that’s only going to be known about by that crowd, is severely weak. A lot of familiar monsters from the game are included but they’re either cheap practical effects or unconvincing computer graphics (especially during a scene in hell that brought back Spawn vibes). Kudos to the team for at least attempting some practical monster effects but they clearly don’t have the budget to make this work, especially when one monster wields fire most fake. Oh, and there’s an Easter Egg of one character named after the game’s creator which is not subtle or clever at all.

Doom: Annihilation does little to make a case as anything more than a promotional movie that would usually come bundled with the game. You may watch it once but grow bored of it and toss it out or forget about it altogether. It has all the same problems with the first Doom movie way back in 2005, presenting a scenario that is way more fun to play than it is to watch it play out on screen. So the next time someone plays through the latest iteration of Doom and makes that common remark about this game being good enough to be a movie, please use this as Exhibit A for why that’s a bad idea.