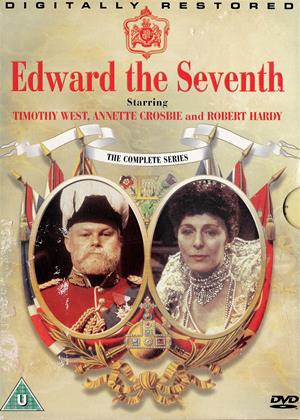 Synopsis:
This is the story of one man's life; its dramas, romances, tragedies, achievements, frustrations. But it is more than the story of Albert Edward, Prince of Wales, eldest son of Queen Victoria and Prince Albert, a man born to be King. The intimate pattern of his personal experiences, feelings and development is interwoven into the broad canvas of national and international events and people covering his sixty-nine years, in particular Queen Victoria and his bride Princess Alexandra of Denmark. Throughout his life can be seen his relationships with such famous figures as Sir Robert Peel, Benjamin Disraeli, W. E.
Gladstone, the Duke of Wellington, Lord Carrington, Colonel Bruce, Nathaniel Rothschild, Lord Randolph Churchill, Lili Langtry, Marie Lloyd and many others. Against his love of pomp and pageantry there is always drama from a near-fatal illness to an attempted assassination, but finally a triumphant though sadly short-lived reign lasting less than a decade but leaving behind memories of a richly coloured life, shaped perhaps because of his frustrations, and a beloved monarch.

1. The Boy
A future king is born but nearly sixty years are to elapse before lie ascends to the throne.
2. Experiment in Education
The young Prince of Wales is subjected to a very strict and arduous plan of education completely unsuited to his temperament.
3. The New World
Edward is growing up and, although restricted to the severe discipline of being prepared for future kingship, has his first tastes of freedom.
4. Alix
A "romance" is planned but Edward is still unwilling to consider marriage. On the contrary, he is enjoying an illicit romance with a music hall dancer. P's father's death is to have a profound effect on his future.
5. A Hundred Thousand Welcomes
Edward marries but his relationship with his mother is still affected by her belief that he is to blame for her husband's death.
6. The Invisible Queen
Queen Victoria's insistence on keeping the Prince of Wales away from public duties contributes to the frivolous life he is leading and which threatens the happiness of his marriage.
7. Dearest Prince
Edward in again involved in a scandal and challenges Lord Randolph to a duel but Alexandra remains loyal to him.
8. The Royal Quadrille
Foreign affairs, particularly those involving the family, occupy a great deal of Edward's time - hut also an affair with a very beautiful actress.
9. Scandal
The strength of the monarchy is threatened by several scandals in which Edward is involved but these worries are dwarfed by the tragedy of his eldest son's death.
10. The Years of Waiting
The turn of the century is a momentous period for Edward. The years cover Britain's involvement in the Boer War, Edward's disillusionment with his mistress Daisy, an assassination attempt and his own lack of confidence in his ability.
11. King at Last
Queen Victoria is dead. The Prince of Wales is now Edward the Seventh. He is now in his 60th year. Can he handle the responsibilities of being a sovereign?
12. The Peacemaker
Edward ascends to the throne at a time when England's popularity abroad in at a low ebb. His determination to improve foreign relationships wins him the title "The Peacemaker".
13. Good Old Teddy
Edward the Seventh's final years are marked by his struggle against illness and his refusal to allow his failing health to impede his efforts to safeguard the peace of Europe.
Actors:
Annette Crosbie, Timothy West, Helen Ryan, Felicity Kendal, Guy Slater, Jane Lapotaire, Michael Osborne, Michael Hordern, Christopher Neame, Peter Howell, Michael Byrne, Judy Loe, Ian Gelder, Madeleine Cannon, Barbara Laurenson, Robert Hardy, André Morell, Moira Redmond, Shirley Steedman, Deborah Makepeace
Directors:
John Gorrie
Producers:
Cecil Clarke, Lorna Mason
Writers:
David Butler, John Gorrie, Philip Magnus
Aka:
Edward the King
Studio:
Network
Genres:
British TV, TV Classics, TV Dramas, TV Military & War Dramas, TV Political
Countries:
UK

Reviews of Edward the Seventh