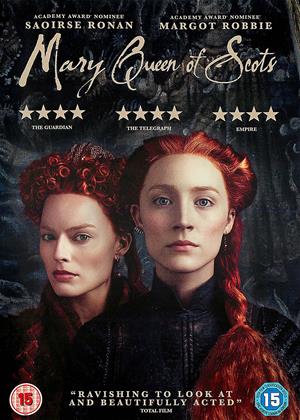 Reviews (12) of Mary Queen of Scots

This is one of those films which makes your heart sink in the first minute - you carry on watching in the hope it will get better but it just gets worse. It really doesn't know what it wants to be - costume drama, historical re-enactment or fantasy. It ends up just being a mess with absurd dialogue in absurd accents and with distracting and non-sensical 'colour blind' casting which just adds to the overall silliness. All in all, it has the feel of a production by a bunch of millennials who know nothing of history and are concerned simply with superficial amateur dramatics and imposing their PC gloss on 16th century Britain at the expense of any connection with reality. If you want to see how this sort of thing should really be done then watch Wolf Hall.

14 out of 15 members found this review helpful.

Did we Really Need this Film? - Mary Queen of Scots review by AA

Another film on the life of Mary Queen of Scots, with no new insight as to what happened and the political posturing of the time, this film is a dreary piece of cinema that really ought not to have been made, apart from giving a large cast of actors technical crew work!

"Tudor feminism" is the title of one of the extras on this DVD and I think it tells you all you need to know about this film. Personally, I think both Elizabeth and Mary are stronger and more complex characters than they are allowed to be in this film. But the rivalry between them was many layered - the religious divide is glossed over, for example. In reality, the two main characters never met but a meeting has to be engineered for dramatic purposes (as it has been in other dramatic settings of the story). I'm not sure that if Elizabeth and Mary had met, the two would have been quite so understanding of each others position. At the end of the day, Mary tried to topple Elizabeth from her throne (or was trapped into expressing support for such a move) and paid the price.

I'm in total agreement with the review by MC. Mary and Elizabeth never met . A totally inept attempt to rewrite history and mislead. Just plain silly!!!

I don't normally take to writing reviews, but this film infuriated me so much I actually stopped watching after an hour - I haven't done that in a long time. I very much respect genuine attempts at making important historical events & characters as accurate as possible and as they deserve; but this mess came across almost immediately as politically correct nonsense, including nicely current "west of Scotland" accents and dialogue; worse still, this presentation of contemporary "inclusiveness" was just factually wrong and completely out of place. It just comes across as another example of this dreadful practice of rewriting history's characters & events.

Avoid at all costs.

Knowing nothing about Mary I found this a very interesting film. She did not have an easy life, in fact some of it was so bad (not least having your head chopped off) that I had to do some internet research to check if it could be true (it was).

Great costumes and beards - Mary Queen of Scots review by HE

You would need to know your history of the time and who all the main characters are. Impossible not to smile at the hair and beard worn by David Tennant as John Knox. I think the film attempted to give an idea of what it was like for both Queens, Mary and Elizabeth as monarchs and as women managing 16th century politics for very high stakes in a man's world of the time. I enjoyed it for what it was as I like historical drama but several scenes didn't quite come off, especially the fictional meeting between the two women, a very "Braveheart-like" distortion of the facts, but then I enjoyed Braveheart very much!

This film is utter claptrap. Many of the locations bear no resemblance to the places they are supposed to represent. "Carlisle" and "The Border" were especially hopeless. The 'plot' was awful and historically inaccurate. It might have survived historical inaccuracy if the plot had been interesting but it was just turgid. The PC elements were so jarringly out of place it was embarrassing. By far the worst film I have seen for some time. There are much better ways to spend 2 hours of your life, don't bother with this one.

I don’t understand why writer, director and actors would put so much effort into a historically inaccurate movie. Costumes and locations were interesting. For some reason Mary is depicted as having a Scottish accent though she had been educated in France. Sadly I think many will believe the historical drama. Waste of time.

Ridiculous and irritating film, which could have been so much better.

I particularly agree with the review by MC

Only watched because of the composer - Max Richter. Some of his other work is glorious (e.g. Hostiles and The Lunchbox) and the soundtrack here again is top notch. He should have avoided this movie though - absolutely terrible.

This is the type of costume drama that finds all the right period attire, spends so much time getting it all to look good and then the drama is expected to just sort of fall into place. It’s a film that frames Mary as a powerful figure but also one of tough choices that rocked her foundation. Yet in the desire to cover what is perhaps the most intense portion of her life, Mary Queen of Scots ultimately comes up rather standard as far as historical epics on notable historical figures.

Saoirse Ronan at least puts in a strong performance as a young and determined Mary Stewart, Queen of Scotland in the 1560s. For not even being 20, she has had a rocky life so far. She has just returned from France after the death of her husband and must continue to take on her throne. With pressures from England, Mary is seen as a young person that could damage the foundation of the Protestant faith in how she gazes with compassion. She’s also very much threatened by her jealous cousin, Queen Elizabeth the First of England (Margot Robbie). With very different outlooks on life and what it means to be proper loyalty, they’ll clash in matters of national affairs.

What follows is a tangled with web of deception and sorrow. Death looms in the form of conspiring assassination attempts and the threat of smallpox. Lies are spun and thrones are fought for in bitter rivalries. Children enter the picture and matters of family and defending a nation become tougher to maintain. War is on the horizon as Mary leads her men into battle, though nothing all that sprawling. Again, the film favors more allure from the fact that her forces could even be assembled on-screen than watching them charge into combat.

Mary Queen of Scots is one of those classroom films that pays great devotion to its historical context but offer little more to explore in its connecting of events. While it does paint an informative picture of how Mary’s marriage altered these plans and how her order for assassination affected those plans, so little of this explores her more as a character. It showcases Mary more as a stern figure of little to move her. Consider the scene where she hands off her crying child to her men while she rides off into battle. In Mary’s state of armor and horse, she glances back only a few times as she hears her child cry out longingly. She remains stoic. She must in such tough times.

But how many historical epics have featured this scene where emotions are hampered and hidden behind closed doors, only coming out quietly when all eyes are averted and the music turns melancholic? In this aspect, the film doesn’t really tell us much we already know. Of course, it’d be tough for a mother to ride off into the distance to leave their child behind, even if they were so adrift in their political struggle to shed only a few tears. Mary as a character is seen as far too noble, right up to her death where all she cares about is the well-being of her son and peace for her country. A sense of family and nationalism may have been interesting to explore but not so much in a film more caught up in connecting dates and events with the same level of accuracy in the costumes.

I can’t falter a film such as this for wanting to play things straight with the material, hopefully making for a more astute essay by a student too bothered to brush up on their history book. But what Mary Queen of Scots offers in its detailed portrait is more on the surface than anything that lies beneath its bulk dresses and clunky armor.