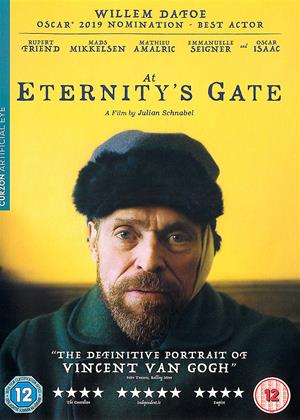 Reviews (5) of At Eternity's Gate

I can't say i enjoyed the story as very bleak .. But it explained a lot about Van Gogh . Willen Defoe was excellent . What a twist to this story at the end . If interested in art and the stories behind them , then you will enjoy this

If you are interested in art, and particularly in Vincent Van Gogh, then do watch this strange and mesmerising film about his life. Willem Dafoe is perfectly cast in the role of Vincent. The film takes you into the artist's mind - you feel his passion, his madness, his sadness. You see where he drew his inspiration. The film has a beautiful, dream-like quality.

As Van Gogh presciently remarked 'Someday people will see the value of my paintings beyond the cost of the paints'. He only sold one painting in his lifetime. He died aged 37 years.

I saw this at a one-off screening in an arts centre . . . and nearly half the audience walked out before the end.

I don't know what it was in particular that offended the early quitters, but I heard someone later complaining about excessive camera movement. Which is a fair comment - there were times where the camera buzzed around like a midge even though there wasn't a lot of action taking place, such as the first outdoor painting scene.

My own reaction is harder to describe. I liked the visuals and the imaginative sound design, and that it gives us some insight into Van Gogh's motives, his underlying philosophy and how it related to other contemporary trends in the art world, through his friendship with Paul Gaugin. But I came away with a sense of discontent, a feeling that the whole was less than the sum of its parts, that I find it difficult to pin down without seeming nit-picking. To some degree, perhaps, it's because it focuses mainly on aspects of Vincent's life that are already well-known - his single-minded devotion to his art, his inadequate social skills, the dire poverty he had to endure, and being snubbed by the critical establishment and art buyers alike. And, of course, his psychosis, which to give credit where it's due, the film does not exaggerate or sensationalise. But what I found really perplexing - and this is what downgrades it from 4 stars to 3 - was the casting choice. I cannot fault Willem Dafoe's performance, but Vincent van Gogh was only 37 when he died, and having him played by the 60-something Dafoe (who isn't even a young-looking 60-something) required a suspension of disbelief. This is especially so in the close-ups, where he often looks nearly 70, and when you see him together with his brother Theo, played by the obviously much younger Rupert Friend.

To sum up, a respectful and compassionate portrait of an extraordinary man, but one that, for me at least, doesn't live up to the promise of its epic-sounding title.

I found this film quite soothing at times and other times not so much (mainly the odd shakey camera action). This is a look at one of the most well known painters and it feels like an art house film. The concept is good but cant say it was a great film as a whole.

Awesome brilliant acting and true to life. William Dafoe excellent in lead role. Rather sad story and definitely not a feel good film.

Trying to understand the mind and madness of Vincent van Gogh has to be a tough portrayal to post on screen. Even 2017’s heartfelt and reflective biopic Loving Vincent took a more distant approach, trying to understand the man more through the people who him than the man himself. It’s an engrossing experience that tries to allow just a little bit more inside the mind of a thoughtful and tortured genius.

Willem Dafoe plays Vincent van Gogh with a quietness most refreshing for his final days in France. We are literally let inside his head to see what he views when he questions a woman about wanting to paint her and how he discusses his artistic ventures. We spend the entire film around this character, sometimes getting whispers of his internal thoughts. He looks out silently on a large vista with a sun, mentioning how some only see a landscape while he spots eternity. He gazes into this allure of nature and ponders such thoughts about his own artistry and his humanity. Did he know he was going to die?

Perhaps it would be too pompous to assume that van Gogh’s madness for the strive of his art transformed him into an oracle of his own demise. But this aspect I find deeply fascinating because this performance seems to say more about ourselves than Vincent. It may seem strange that such a well-regarded artist could be taken so soon before the world knew of his greatness. If only he knew. Did he know? Did he ever think about the future? Maybe he did and maybe he didn’t but there’s a spiritual empathy we’d like to feel that someone so profound from generations ago thought the same things we thought.

Dafoe perfectly plays the character without bringing too much past the desperation seen more on his face than heard in his voice. There are certain scenes that seem like nothing as he tries to understand himself and the world. In one instance, he stumbles out onto a countryside hill, lies down on the grasss and sprinkles dirt on his face. This may seem strange until you consider the perspective of an artist. There had been tell during the early days of the Disney studio that animators, desiring the best perspective to draw from, laid down in the middle of a city street to get just the right angle of looking up at the sky.

Throughout the film is a fleeting sensation of trying to find more and never quite getting there. Many roadblocks occur for Vincent. He holds an art collective at an establishment but is berated for the gallery featuring work the owner does not approve of. He’ll later paint the roots of a tree and will be ambushed by children and their teacher that his focus is weird. Why would a painter paint roots? Why not the tree or landscapes or portraits? Vincent can’t quite explain his fascination. He’s too busy seeking the next perspective or unseen force to be bothered with placing exact meaning that the questioning throws him off. He feels he just needs to keep painting and he’ll find more.

Director Julian Schnabel focuses on a lot of the little details to find clues to Vincent’s mindset. We get to see plenty of paintings with lots of close-ups. There are several scenes where we merely watch a silent Vincent van Gogh walk around a room and maybe start up a painting of his boots. He ambles about town and sometimes his internal monologue crops up and gives some insight. We get to spend a lot of time with him more watching than listening. There’s something rather beautiful about such a portrayal.

At Eternity’s Gate may seem almost distant in pinning down Vincent despite seeing the entire film from his angle, including after his death. But there’s a relatable sensation to trying to understand the artist from this angle, feeling more of his anguish and mental mindset than just digesting a standard biopic of hitting all the beats. It’s not an all-encompassing biopic and benefits from a deeper focus on perhaps the most intriguing part of his life.