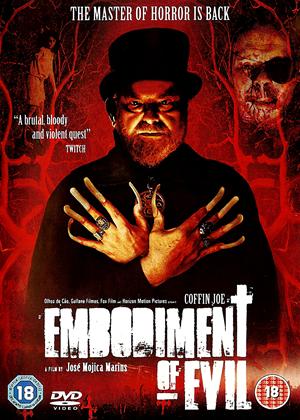 Reviews (1) of Embodiment of Evil

‘Nails grow even after death.’ Mild spoilers ... - Embodiment of Evil review by NP

This is an extraordinary tale, featuring the return, after a 40-year incarceration, of the notorious Coffin Joe, long believed dead. With nothing more than some huge, curling fingernails, José Mojica Marins (a bearded Brazilian Bela Lugosi, who also directs and writes) cuts an imposing figure, and it isn’t long before he is up to his metaphorical horns in evil. It doesn’t go all his way by any means, however, as he appears to be haunted by the ghosts of those he has wronged in the past – a past illustrated by many flashbacks.

This is very much a sequel rather than a standalone film and as such, I found myself enjoying the Faust-ian imagery and the demonic nature of Marins’ heightened performance rather than trying to figure out precisely what was going on (the previous two instalments were produced in the late 1960s). As it makes no great effort to embrace a viewer unfamiliar with any earlier chapters, things can dissolve into a dark soup of shouting and wailing (and torture), a soup not thinned by any sympathetic characters or anyone an audience can relate to. Everyone we meet is a grotesque of sorts, and what they may lack in empathy, they succeed in collectively conjuring up a relentless environment of horror.

His mission is to ensure the ‘continuation of his blood’. That is, he very much likes the idea of procreation. We are not spared this, either. It is a grisly, saturating scene, carried out without ever removing his Mephistophelean top hat and cape.

It wouldn’t be entering into the spirit of things to question why the authorities wait until Coffin Joe has committed many bloody atrocities since they reluctantly released him from jail, before investigating his activities. This is a world within a world, and if you are in the right frame of mind, is hellish and immersive. If not, it comes across as being somewhat one-note.