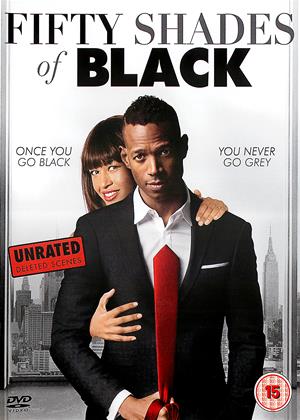 Reviews of Fifty Shades of Black

Marlon Wayans continues his campaign of keeping the movie satire genre well out of range of being comedic. He embodies the juvenile joking of the talkative audience members that walked out of Fifty Shades of Grey. There were most likely one or two black people that remarked how they would’ve made a much different version of that movie. Those jokes are mildly amusing between friends and maybe a skit on Saturday Night Live. But a feature-length parody by an uncreative writer and actor as Marlon reveals everything that can go wrong, in addition to being cartoonish racist, sexist and stereotypical.

I wish I could be offended by all this, but this is pretty much par for the course of Marlon Wayans. He places himself in the role of Mr. Black, a rich mogul that takes on young lady Hannah as his sexual plaything. Both of them are black and encapsulate nearly every black stereotype - designations of “bitch” for all women and “you gay” when referring to sexuality are just the tip of the iceberg. In portraying Mr. Black’s racist family, his white mother serves him fried chicken and Kool-Aid while the Asians receive Peking duck. You think you’ve gotten the joke by now, but Black’s mother has to additionally add in references to Detroit and Asian shoe factories.

The gags are tired and relentless with no visual smarts or telling commentary. Not only are they poorly written, but Marlon finds new ways to destroy them even if they had been competently conceived. To parody the scene where Mr. Grey brings Ana for a ride on his private jet, Mr. Black laughs in her face when he takes her on a bus. The joke continues on when he laughs at her again while taking her on a commercial plane, just as unfunny as it was the first time. Tired gags are even interrupted between other tired gags. While introducing his playroom to Hannah, she spoils the gag by asking if it’s a room of video games. Not only is it just that, but Black extends the scene by simulating sex with inserting the key - spitting on it and shoving it in and out.

Of course, the content of Fifty Shades of Grey is not enough for a satire and Wayans takes aim at other notable movies, but with no tact. He satirizes Whiplash by forcing its dialogue and actions into a sex scene. He lampoons Zero Dark Thirty of all movies during the S&M scenes which create a strange alternative motive for his character to find where Bin Laden is hiding. He mocks Magic Mike by stripping for an audience to reveal his small penis and drooping testicles. This brings about the last and laziest of his comedic bag of tricks: gross nudity. If a penis isn’t seen as tiny, it’s the dragging across the floor as it knocks over random items. With how many comedies in recent years have used the sight of penises as a method of shock humor, these scenes do not shock, amuse or even disturb. As with every gag in the picture, it’s an eye-roller and a sigh-inducer.

Having seen Wayans’ previous satires, A Haunted House and A Haunted House 2, I’ve grown considerably numb to his mean-spirited ways. Sure, it’s a horrendous picture that should not be viewed by anyone, but what more should I expect from Wayans? He’s dug himself a deep grave of immature, foul and unpleasant comedy in which he’s managed to drag Fred Willard and Florence Henderson down with him. Years ago, Aaron Seltzer and Jason Friedberg placed the final nail in the coffin of movie satire with Epic Movie and Meet the Spartans. Wayans put in a few extra nails and tap-danced on the grave just to make sure the genre never recovers. He has an uncanny ability to carry on heckling and jokes far past their expiration date. In the case of Fifty Shades of Black, he should’ve stopped at the first joke he cracked after seeing Fifty Shades of Grey before it ballooned into this travesty.