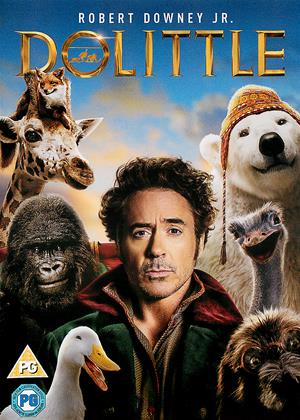 Come back Rex and Eddie, look you boyos. - Dolittle review by NC

Dick Van Dyke's cockney accent attempt now totally trumped by Downey, inexplicably Welsh. In fact sometimes unintelligible Welsh accent. Almost like a dubbed film. Did he do it properly, and then some Rhys Ifans fan decided to over dub ?

Kids will love all the PC graphics with the animals. Agents will love their clients earning loads for a bit of dialogue.......Emma.....Again........bit like Cats, ideal opportunity to spread the money amongst unknown talent, but plum jobs landed by the same suspects...........

I enjoyed it, it's a lot of fun - Dolittle review by TB

It's a lot of fun, just has long has you don't take it seriously. With the negative reviews I read wasn't sure what to expect, so hired it & now I what to buy it, I thought it was great fun, just don't try to compare it to any other dolittle films, weather it's the modern day American version or the old black and white version, it's different to much.

The accent didn't bother me, I couldn't place it, but that doesn't bother me, purhaps it's because I'm tone deaf or didn't realise he was suspose to be Welsh and didn't even pick up on any cockney accents, but then I don't always bother with the accents & just concentrate on the story being told.

Having read the CP review, I was surprised to see that this film is much better than the review appears to suggest! The one notable thing about this film is that unlike so many of it's contemporaries, it does not pamper to the PC brigade and does not feel the need to have a tick list of virtually every skin colour or racial group included, nor does it pander to feminism, which actually in todays movie set, makes it stand out and really is quite refreshing from that point of view! This isn't trying to be a remake of the original 1960's Rex Harrison version, or the Eddie Murphy re-make, this offers us something completely new. Set in a pseudo cyber punk style Victorian era, this isn't a brilliant blockbuster, it's more of a laid back mildly humorous Sunday  afternoon family movie for the kids. Many of the jokes are really quite ancient and some fall a bit flat, whilst others are quite predictable. The script and storyline really offer us nothing new, this to me felt like the ideas had been pilfered from many other movies such as 'Pirates of the Caribbean' or ' The Wizard of Oz' and it did feel like a budget Disney movie, which it isn't! It has become derringer nowadays to set up the ending for a sequel, in this film, the sequel set up is right at the beginning. One point that the CP review does make is about the editing, which really is quite scruffy and choppy and many of the sequences move too fast or literally jump all over the place due to the poor editing, it's not very smooth or flowing. The actors themselves give good performances, Michael Sheen gives a great if not little bit hammy performance as the bad guy, but neither the script, storyline or direction are really strong enough. All in a good but average film for the kids and probably one destined for the bargain bin!

Downey must be short of money, avoid. Verdict of 4 adults, perhaps children would like it, but nothing like the original

Loved it! - Dolittle review by Jamielou

I wasn't really expecting much from this film as I thought the preview scenes were pretty bad, however they are possibly the worst part of the film. Sure it's a preposterous storyline but it worked for me and the CGI animals are fantastic. I would say just turn your brain off and go and enjoy it!

Kids loved it.. lots of humour!

As almost the mediocre mascot for the January movie season, one could speculate that Dolittle feels soulless given that Robert Downey Jr. looks so muted in the poster and the trailer for the film. That usually happens with films the actors don’t feel as invested in, especially if they’re supposed to be in a fun adventure film. Sure enough, RDJ seems to check out of the movie, phoning in an accent with much mumbling I’m not entirely sure if he’s going for Scottish. But it becomes pretty clear that almost everyone was out to lunch when it came to this messy adventure.

The film is off to a decent start with an animated intro to how Dolittle (Robert Downey Jr.) was granted a massive estate where he could treat the animals he could talk to. Cool, so it’s not an origin story. In fact, there’s some compelling pathos when he loses his wife at sea and closes up shop. Maybe something can inspire him to get out of his funk. That inspiration, unfortunately, comes less from the plucky boy who answers his door and more from the dying Queen of England. If she dies, the contract for the estate expires. And if that expires, all of Dolittle’s animal friends will have to fend for themselves in an era of hunters. So Dolittle needs to save the block more than saving the queen, even though that’s his quest.

Discovering that the queen is poisoned, Dolittle sets off on a journey to a mysterious island for a mysterious fruit that will mysteriously cure the queen. His adventure comes so mundanely predictable and so quickly that there’s little time to get to know Dolittle, his boy apprentice, or any of his animal sidekicks (all voiced by celebrities with standard one-liners). He is pursued by a villainous general played by Michael Sheen in a mustache for twirling and your standard bad-guy quirks. He makes a stop at the palace of king played by Antonio Banderas who mostly phones in his intimidation and emotion to never come off too scary for the kids (or interesting). Jim Broadbent also plays a royal that’s conspiring to kill the queen but he’s such a bookend of a villain that I doubt anyone really cares if Dolittle bests him.

It doesn’t take long to notice that this movie was most likely savaged in the editing room. Notice how fast scenes go by with little establishment and exposition rambled so fast you’d have to jot down notes if you really care about the specifics of the MacGuffin plot. Silly animal sequences, elaborate as they may be, never come off silly enough as celebrities put on mild comedy. John Cena voices a polar bear afraid of the cold but I could just feel him shrugging for a character who doesn’t have much mileage with such a gag. Kumail Nanjiani voices a nervous ostrich. Emma Thompson plays a leading mother figure of a parrot who confers with Dolittle most. Ralph Fiennes voices an evil tiger who, even when armed with a brilliant bit about being insecure, never impresses.

But what’s perhaps most peculiar about this film is that it features an insane climax that doesn’t quite feel as ludicrous as it could’ve been. In order to acquire the legendary fruit, Dolittle must quell an angry dragon. His solution is to perform emergency colon surgery on the dragon. And, yes, this means a fart joke is on the way. Surprisingly, not very funny.

Even with brisk editing at under 100 minutes, Dolittle is still a slow crawl of a picture for how little of the manic moments entertain. Kids will probably dig a few of the funny scenes but I doubt much of the frantic nature will make them remember much. I even doubt they’ll recall the dragon fart.