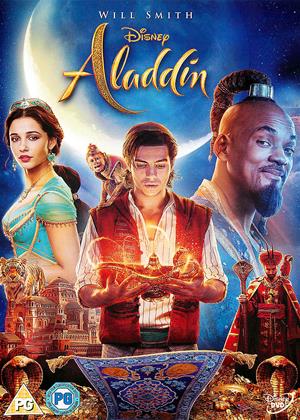 It was enjoyable but not worth the remake. The Disney animation classic is better, I'd watch that if I were you it is far superior.

The carpet was magic. The monkey was great. The rest sucked.

Again the original is best. Have to be wary copying things. Beauty and the Beast was clever. Dumbo was not. This is in between the two i guess. Will Smith made some strong money i suspect, but an unknown could have had a chance at the genie perhaps?

Perfect for A WET RAINY DAY - Aladdin review by AA

Not a classic but good enough to keep one watching as I did on a wet rainy afternoon.  Visuals were up to standard and Will Smith seemed to be enjoying himself, but as is the case today the visual effects were the stars!

This has all been seen before in a different format. It really demonstrates Disney's paucity of ideas to keep on remaking their classic animated features in live action and CGI. Almost a kind of licensed plagiarism. At least Tim Burton didn't remake DUMBO exactly like the original, and added some stuff of his own as well as omitting other scenes. Not so much for ALADDIN, which has the same plot, songs and characters. No way can Will Smith's genie match Robin Williams' original interpretation. Jafar doesn't seem as evil, Aladdin a bit wet (literally in one scene), but I quite liked Princess Jasmine. If you haven't seen the original, you might enjoy it, but if you love that version.... Mmmmm.

Enjoyed it - Aladdin review by AM

To buck the trend a little we really enjoyed this film! It was fast paced, story was clear, some of the songs catchy and we had a great movie and popcorn session!

A good generally tame family movie for the kids! - Aladdin review by CS

Having watched this film twice now, just to make sure, I'm still not quite sure what to make of it! First time around I hated it, thought the songs were awful, that it was way over the top on both special effects and PC'ness, full of Feminist propaganda and that it really dragged on. Having watched it a second time, I warmed to it and now have a bit of a love hate relationship with the film!

Nothing new or original with the plot, script or storyline. Given that the original story, taken from the classic Arabian Nights, is actually very dark and that in Arabia if you stole food, you would have had your hand chopped off or be put to death, being Disney they make light of these little issues, unlike the original 40's to 60's films, which would have portrayed a time and place like this in all it's grim reality. It's quite obvious to see that the film is made to appeal to a wide variety of markets around the world, including the Middle East and China, so any real life historical references are conveniently left out. I remember all the old Chinese and Arabian adventures from my childhood being quite violent and bloody, being a more accurate reflection of cultural values at the time!

Some of the songs are quite upbeat, funky and energetic, but others are downright awful. Why all the male songs, chiefly sung by either Genie or Aladdin (Will Smith or Mena Massed) are uptempo catchy numbers, whilst the female songs, mainly sung by the Princes (Naomi Watts) are all awful warbling screechy power ballads ranting on about female empowerment and self belief, is beyond comprehension. I personally am not a fan of those awful power ballad operatic numbers, of which Frozen was full of them, droning on about feminist agendas, I prefer the classic sing-a-long poppy numbers that Disney used to do back in the 60's, in films like Mary Poppins and Bedknobs & Broomsticks! I could not help wonder if these female empowerment songs in this film, clearly slagging off male power, were directly aimed at the Muslim Community and current issue within those communities, which in itself is not a bad thing!

The costumes and scenery are great, but some of the CGI does get a little blurry and not so impressive or a bit OTT at times, such as when Prince Ali make his grand entrance to the City! But the Jewellery, which should be one of the main features in the film, all looks very cheap and tacky, like cheap costume jewellery, rather than the real thing. The acting is quite good and both leads give strong performances, as does the cheeky little monkey Jafar, but I feel that Mena Massad as Aladdin (Allah-Din), gives the strongest performance, simply because all Naomi does when she sings is warble incessantly! All in a very good family movie, some great highs and lows, not overfly funny, just a good live action film that I can see now being adapted for the stage!

Diving into another one of Disney’s live-action adaptations of their animated classics, it can be easy to write them all off as pointless. This apparently goes double for films the legendary Disney renaissance of the late-80s/early-90s which included such trailblazers as The Little Mermaid and Beauty & The Beast. Now Disney has taken their aim at Aladdin but, whoa, hold your initial scrutiny for a moment. With director Guy Ritchie attached to the project, this Disney adventure is trying just a bit harder to escape the easier comparisons and do more than merely replicate an already classic film.

Not surprising for a Ritchie film, considering how fast the film starts. Our villain Jafar (Marwan Kenzari) already on the move and the street rat Aladdin (Mena Massoud) already meeting the disguised Princess Jasmine (Naomi Scott) in the streets of Agrabah. But then we slow down and take our time to get the know the gold-hearted thief and the daring princess in their mutual dreams of more. Ritchie does exactly what I wanted out of a film such as this and flesh out the characters far more than the animated film, to the point that even Jafar doesn’t have to put on a goofy outfit to convince Aladdin to go treasure hunting in the cave of wonders; all he has to do is appeal to Aladdin’s desire for power, a somewhat mutual goal.

Once Aladdin comes into possession of the magical lamp, he unleashes the cosmic power of the lamp’s Genie (Will Smith). Now comes the part where fans of the original will be most scrutinizing. Because, let’s face it, the biggest draw of the 1992 original was Robin Williams and his unforgettable voice acting of the magic genie. Thankfully, Smith doesn’t really try to match the manic nature, favoring his familiar brand of humor and goofiness he’d been perfecting for years on The Fresh Prince of Bel-Air. In the same way that Genie has been trapped for thousands of years in this lamp, it also feels as though Smith is dusting off his old comedy routine. And despite the CGI needed to make him a bit more fantastical and faster in his gags, he still has some of that old silly magic.

Going further with the characters, Smith also gets more to do as the Genie than merely cheer from the sidelines as the now Prince-turned Aladdin attempts to woo Jasmine under a new identity. He gets in on the romantic comedy angle by forming a cute and enticing romance with Jasmine’s handmaid in adorable sequences of them stumbling over their words and trying to hide their blush. It’s far more tantalizing than the expected musical numbers and a few more showcases of grand VFX. I’m not sure we needed a chase sequence with a giant Iago but I guess you gotta have something for Aladdin to flee from.

Yes, we’re still burdened with the familiar musical numbers, but with just a few tweaks to be a bit more distinct. Smith doesn’t have the best voice for the outlandish sequence of “Prince Ali,” but still gives that Big Willie style vocalization that suits him better than Williams’ larger than life approach. “A Whole New World” has very little change because I guess you just don’t mess with a classic. Thankfully, Naomi Scott gets a few new songs in the film that shine much brighter for their originality and power, not to mention she has the best voice of the entire cast built for singing.

As Disney continues on with these live-action renditions of animated classics, there are a few better steps in this version of Aladdin. They’ll keep making these films as long as they make money and if they must continue, I feel they must make attempts to be more of their own thing than stale retreads. Aladdin thankfully dusts off just enough to see something more than the familiar.