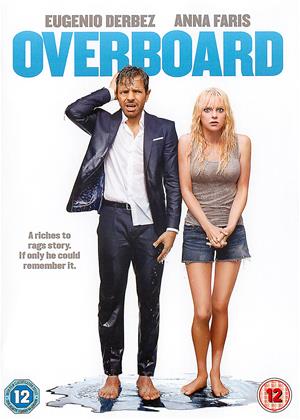 Synopsis:
In a splashy new twist, 'Overboard' focuses on Leonardo (Eugenio Derbez), a selfish, spoiler, rich playboy from Mexico's richest family, and Kate (Anna Faris), a working-class single mom of three hired to clean Leonardo's luxury yacht. After unjustly firing Kate and refusing to pay her, Leonardo falls overboard when partying too hard and wakes up on the Oregon coast - with amnesia. Kate shows up at the hospital, and to get payback, convinces Leonardo he is her husband and puts him to work - for the first time in his life. At first miserable and inept, Leonardo slowly settles in. Eventually he earns the respect of his new "family" and coworkers.
But with Leonardo's billionaire family hot on their trail and the possibility of his memory returning at any moment, will their new family last or will Leonardo finally put the clues together and leave them for good?
Actors:
Eugenio Derbez, Anna Faris, Eva Longoria, John Hannah, Swoosie Kurtz, Mel Rodriguez, Josh Segarra, Hannah Nordberg, Alyvia Alyn Lind, Payton Lepinski, Fernando Luján, Cecilia Suárez, Mariana Treviño, Jesús Ochoa, Omar Chaparro, Adrian Uribe, Edgar Vivar, Per Graffman, Nils Hognestad, Thomas Nicholson
Directors:
Rob Greenberg
Voiced By:
Ron Bottitta
Writers:
Bob Fisher, Rob Greenberg
Studio:
Vertigo Releasing
Genres:
Children & Family, Comedy, Romance

Lady does look a bit like Goldie. Great deal of subtitled Mexican/Spanish for some reason......was it a Spanish film originally? Bit strange.

Is OK, and is not offensive......so put it up to 3 rather than 2 mainly based on that. In fact don't recall one F or MF in the whole film. That is a novelty these days.

When they get Plummer and Statham F and Blind through the whole film, for no good reason, is just not necessary............

After I came to terms with the large amount of subtitled Spanish and yes I can read, it is just that it interrupted the flow of the humour, I quite enjoyed this movie.

I always like Anna Faris but in this movie she was under used, the male lead (who is a huge Mexican star apparently) getting all the best lines, which sadly makes the film less good than it could have been, The male lead also could have done with being a bit younger and more of a hunk to get best value out of Faris, but I guess he was key to getting the movie made at all.

But, all that said, I did still rather enjoy it and if you want a bit of light weight silliness this is good value, but the premise could have been so very much better which is why a star is knocked off the rating.

It starts absolutely horrendous, I nearly switched it off but it does get going and it gets a lot lot better. If you can get to the point of the person going overboard then you are over the worst!

Not a patch on the original with Goldie Hawn and Kurt Russell although this one swapped gender places. Fast talking and over-posturing, I didn’t enjoy this at all

In the shifting of cultural norms and giving old formulas a gender-swapping, it’s important to recognize the flaws in the dish rather than just shifting ingredients. Overboard is a classic case where merely swapping roles still carries a dated and despicable nature trying to masquerade as a romantic comedy with a sappy conclusion. It’s going to take more than amnesia of the previous film to ever enjoy something this artificial and misguided.

Anna Faris plays Kate, a woman struggling so hard to make ends meet. She works multiple jobs, has three kids, is single, trying to go to college, and her mother is no help, leaving her to handle the kids alone while she pursues acting. Oh, and there’s a dog, too. You gotta have a dog in a sappy family comedy. At least, I thought it was intended as a family comedy until we arrive at the snooty rich bachelor Leo (Eugenio Derbez), spending all his nights on a boat with wild parties of sexy women. Kate is hired to clean his bedroom and will see a tattoo of Speedy Gonzalez on his butt. He doesn’t mind; willing to do the Speedy voice with great cringe. It’s not that he’s charming; he just looks down on everyone who isn’t him. So he naturally shoves Kate off the boat when she refuses to serve his refreshment because that’s just the kind of luck Kate has.

Soon after this incident, Leo will be knocked overboard and have amnesia. Kate, eager for revenge, decides to fake a bunch of documents to trick Leo into being her wife. This act of revenge is relentlessly cruel, especially with how Kate continues to take advantage of Leo by setting strict rules around the house, forcing him to do stuff a rich boy would normally do. He’ll try to cook and turn the kitchen into a mess of spaghetti that he’ll slip all over. He’ll take a job in construction but isn’t very skilled and will tumble some more. It won’t be until deep in the third act when Kate finally takes a keener liking to Leo and perhaps even learn to love him.

Need I go on? Would it even be a spoiler to mention that Leo will eventually gain his memory back and have to make a choice between romance and riches? Even if it weren’t for an awkward scene of condoms and babbling about cheating, this film is too morally adrift to be passable even as dopey family comedy. This goes double for the ending where everything seems to work out just fine for Kate. Better than fine, as Leo is able to secure a huge chunk of change to place Kate’s financial woes far behind her. I can only fathom this happier when was approached because it didn’t seem happy enough that Leo and Kate would live together in harmony while still struggling with finances. Doesn’t that kind of defeat the whole point of the plot? Was there even a point at all?

I’m not one of those reviewers who tends to retreat to a negative connotation applied amid a dopey screenplay but what choice does such a film give where the only cure for Kate’s problems is to take advantage of rich people with memory loss. It won’t matter if you’re lying and instilling a terrible message for your kids so long as everything works out financially. Such a dark lesson for a rather light and brainless comedy of pratfalls and easy sex jokes.