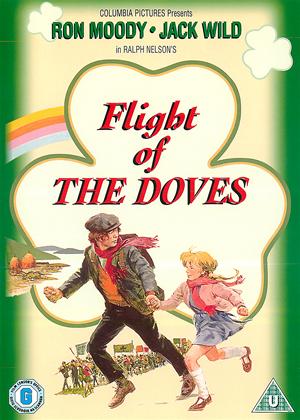 Synopsis:
Constantly bullied by their cruel stepfather, Finn Dove and his young sister Derval decide to run away. But their great escape across the sea to Ireland proves to be as famous as it is thrilling - with their very lives at stake. Their wicked Uncle Hawk, a brilliant master of disguise, discovers the kids are heirs to a great fortune and, if they die or can't be traced, he will get all the money. As Finn and Derval stow away on a Dublin bound steamer, evil Hawk, disguised as a policeman, is hard on their heels...
Actors:
Ron Moody, Jack Wild, Dorothy McGuire, Stanley Holloway, Helen Raye, William Rushton, Dana, John Molloy, Barry Keegan, Brendan O'Reilly, Noel Purcell, Tom Hickey, Niall Toibin, Brendan Agnew, Emmet Bergin, Joe Cahill, Brendan Cauldwell, Vernon Hayden, John Hoey, Tom Irwin
Directors:
Ralph Nelson
Voiced By:
Robert Rietty
Writers:
Frank Gabrielson, Walter Macken
Studio:
Sony
Genres:
British Films, Children & Family
Countries:
UK

Reviews (1) of Flight of the Doves

Flee From This One. - Flight of the Doves review by NC

I knew I'd made a mistake watching this when a St. Patrick's Day parade the escaping children become caught up with, all of a sudden bursts into a song and dance routine straight out of your worst screen musical nightmare. Up to that point 'Flight Of The Doves' had legs as an undemanding chase story about two children escaping the clutches of two wicked uncles, and trying to find the home of their grandmother in Ireland.

Ralph Nelson appears to have had no idea of what sort of film he wanted to make: one minute it's a children's adventure story, with narrow escapes galore; then it's the kind of awful comedy that filled the screens at that time, with thick police, and unutterably stupid comings and goings through a series of doors, as in a farce or a Charlie Chaplin silent; then it's pure whimsy, complete with a sunset, a sickly song from Dana, and a pass-the-bucket finale. The children aren't the only ones totally lost.

There are snatches here and there of what could have been - most of them involving Ron Moody in a variety of disguises, a la Peter Sellers or Alec Guinness, playing the part to the hilt in a barnstorming display of deliberate overacting. Without him the film would have been turned off long before the ending.

Incidentally, Nelson's previous work to this, unbelievably, was 'Soldier Blue' - another film of excess, but of a totally different sort.