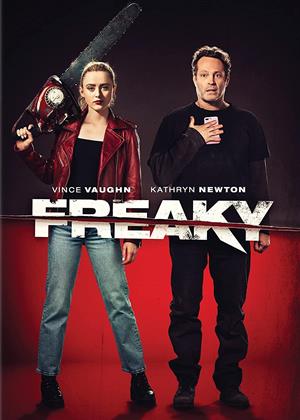 Synopsis:
This November, on Friday the 13th, prepare to get Freaky with a twisted take on the body-swap movie when a teenage girl switches bodies with a serial killer. Millie (Kathryn Newton) is just trying to survive the bloodthirsty halls of Blissfield High. But when she becomes the target of The Butcher (Vince Vaughn), her town's infamous serial killer, her senior year becomes the least of her worries. When The Butcher's mystical dagger causes him and Millie to wake up in each other's bodies, Millie has just 24 hours to get her body back before she's trapped as a middle-aged maniac forever.
Problem is, she now looks like a towering psychopath, while The Butcher looks like her and has brought his appetite for carnage to Homecoming. From writer-director Christopher Landon (Happy Death Day) comes a pitch-black horror-comedy about a slasher, a senior, and the brutal truth about high school.
Actors:
Vince Vaughn, Kathryn Newton, Celeste O'Connor, Misha Osherovich, Emily Holder, Nicholas Stargel, Kelly Lamor Wilson, Mitchell Hoog, Dana Drori, Katie Finneran, Alonzo Ward, Dustin Lewis, Jennifer Pierce Mathus, Uriah Shelton, Melissa Collazo, Zack Shires, Alan Ruck, Magnus Diehl, Dane Davenport, Nick Arapoglou
Directors:
Christopher Landon
Producers:
Jason Blum
Writers:
Michael Kennedy, Christopher Landon
Aka:
Freaky Friday the 13th
Studio:
Universal Pictures
Genres:
Comedy, Coming Soon, Horror, Thrillers

Just saw this at the cinema and have to say I really loved it.

This feels like it's back to the standard of the classic 90s slasher films (Scream, I know what you did last summer, Urban legends, final destination).

The cast are likeable and we get a comfy 90s feel with the characters. Unlike most of the horror films recently we dont get characters being annoyingly millenials.

The kill scenes are gory but has a great balance of funny lines and kills.

Freaky is one of those films you wished you'd have seen at a lively cinema screening (good luck if you are in the UK - our audiences are so quiet). I saw it at the cinema with about 6 people and I did hear a few people titter or mildly shriek, so that's a good sign. Freaky took a while to warm up, beginning with a rote prequel where the Blissfield Butcher wipes out a bunch of dopey teens, and then introduced our heroine, Millie, who is the school outsider/geek. Through some contrivance, they swap bodies via a piece of Poundland jewelry and then the high concept kicks into gear. A lot of fun is had with the murders, the confusion, the chases, and Vince Vaughn's convincing take on playing a 16 year-old woman... However, this is a one-off watch, something of a Big Mac movie that serves as a fun time-passer but doesn't excel itself beyond that (which is OK). It reminded me of a Scream sequel and Nightmare on Elm Street 2 (which was the first big Gay horror film). Also look out for Alan Ruck from Ferris Bueller's Day Off as a real douchebag of a teacher!

Body switch films tend to all fall into a pattern of what comes about from such switching of minds. A character finds themselves out of their own body and antics ensue about what they can perform in their new shoes as they struggle to get back in their own. Almost every tale of this proceeds in the form of a fish-out-of-water comedy, where our protagonist(s) must learn some empathetic lesson to find their way back home. It’s become such a played-out trope that it has often been associated as a narrative that television programs will resort to when it’s clear they’re on their last legs.

Thankfully, Freaky finds more to such a concept than merely removing Friday from the title. Here is a unique premise for a horror picture in which a high school girl and serial killer swap bodies. The killer in the girl’s body continues his rampage about a high school while the girl in the middle-aged man’s body struggles to make her case and avoid being arrested. There’s little time for the easy jokes of a premise, including the more expected and juvenile bits where each gender will observe their sexual organs with snark. There’s a race against the clock and plenty of dark thrills to be had from such a wild idea, even if it bears a striking tone to that of Happy Death Day.

What makes this story work so well is the energy present throughout. Vince Vaughn is capable of portraying the convincing killer of the Blissfield Butcher, as seen in previous graphic pictures as Brawl in Cell Block 99 and Dragged Across Concrete. But he gives a surprising comical performance when trying to put on the guise of a teenager trapped in such a body. It works for both the shock of a girl being in a man’s body and the allure of such power she wields from a vessel so intimidating (or about as intimidating as Vaughn can be when compared to the teenagers he converses with). Credit should also be given to Kathryn Newton who starts off by portraying Millie Kessler as the meek outsider of school being bullied to a dangerous killer capable of such unexpected savagery.

As a horror film, Freaky succeeds incredibly well at the mounting blood and guts, proceeding with a wicked glee throughout the picture. The absurdity of the situation and tension of the killer running about stirs up all sorts of great comedic kills, where there’s far more than stabbings going on about the killer’s rampage. Scenes such as freezing a teen to death that she shatters into pieces perfectly fit a mood that is aiming for hilarity. That being said, the comedic angle leaves a bit to be desired. Much like Happy Death Day and the sequel, this film relies almost entirely on its gimmick to carry the humor throughout. While this can bode well for the focus, many of the additional comedic elements don’t hit as well. This is of particular note with a gay character who is treated more like stereotypical fodder that appears far more dated than it should be.

There’s just enough steam within this mildly-original premise to carry Freaky as a clever and thrilling mixture of horror and comedy. Director Christopher Landon continues to pump his horror films with glee, even if that energy tends to become unwieldy in some cases (see Scouts Guide to the Zombie Apocalypse). Freaky is certainly one of his stronger pictures to date even if it does showcase a bit of a pattern for his style of horror which I can only hope he doesn’t settle too neatly into with future films.