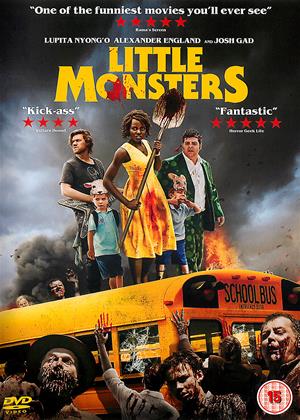 For those that were waiting for Zombieland 2 and were then disappointed at how flat and unfunny it was, Little Monsters may just cheer you up. This very sweary Australian comedy horror is too late in the cycle to offer much that's original beyond its USP - kindergarten kids v zombies, but it is very funny at times. Starring Americans Lupita Nyong-O and Josh Gad amongst a cast of lesser spotted Aussies, this holds back on the splatter for the first 40 mins or so but once it gets going its a fast moving hoot with fun characters.

Josh Gad has the plum role as a children's entertainment Mr McGiggle, who turns out to be a self-serving monster when the sh*t hits the fans. The central couple are good value even if the guy is a little hard to warm to at first. An unexpected hit but you'll only watch it once. It's no classic.

Theres quite a few zombie movies and tv shows around so it's difficult to create something a bit different.

Full make for this film. The 2 leads are great and has some good funny lines.

The zombie kills are brief with more focus on the characters and the kids.

I would say this is well worth a watch.

Zombie comedies are a popular genre but were probably done better in Shaun of the Dead and Zombieland. However, this is still quite entertaining and has some great comic moments. It doesn't hurt having the great Lupita Nyong'o who shines throughout but the film is an easy watch if not particularly original.

An amiable adult horror comedy that mines the well worn road of the zombie sub-genre and manages to be enjoyable despite the clichés. Dave (Alexander England) is a layabout who agrees to help with his 5 year old nephew's class trip to a petting zoo because he fancies the teacher, Miss Caroline (Lupita Nyong'o). Dave comes into his own when a zombie outbreak starts after an escape from a military laboratory next door. The film is crude, bloody and quite funny but it's the little kids that make it. All charming and who handle the whole horror thing really well. Like Zombieland (2009) this is entertaining and fun so worth a watch. Josh Gadd supports as a cowardly and unpleasant children's TV host.

Not my thing - Little Monsters review by JR

It's an uneasy mix of cute kids and zombies which didn't quite work for me. It was neither particularly funny or scary and had a real B-movie, slightly hammy feel. If the idea of kids having a sing along while zombies claw at the windows appeals then maybe give it a look. My friend thought it was great, personally I wanted to fast forward past all the cringe inspiring, cute kid stuff, so not really my thing.

Not to be confused with the weirdly surreal kid’s film of the 1980s, Little Monsters is a zombie picture that once more puts a giddy glaze on the gruesome genre. It places bitter individuals in the situation of a zombie apocalypse where they try to survive in a quirky manner and maybe get over their own issues. It’s played light and loose with blood and guts if that statement makes any sense.

Dave (Alexander England) was once a brash musician with a fall from grace has become washed up with his career and breaking up with his girlfriend. This has led to him bunking with his sister and her little boy Felix. His love life receives a spark, however, when he drops off Felix at school and meets the lovely Kindergarten teacher, Miss Caroline (Lupita Nyong'o). Smitten quick by her musical allure, Dave volunteers to help her out with a field trip to a farm.

But even before the expected zombie outbreak, things are far worse for Dave once on the field trip. Not only does he now have to put up with the annoying and cocky children’s television entertainer, Teddy McGiggle (Josh Gad), crowding the event, but Dave learns that Miss Caroline is already to be wed to another. So things are already not looking swell for Dave when he not only has to survive a zombie outbreak but protects an entire class of kids from being munched on by the undead.

Little Monsters goes for a lot of the expected bits of gruesome dark comedy. The adults try to wrangle the kids together and keep them calm by ensuring them everything will be okay, despite a horde of zombies chowing down on people and animals across the farm. This leads a clashing of Caroline and Teddy, the way Caroline tries to keep a chipper spirit for the children while Teddy cusses up a storm in front of them.

There are predictable but pleasing means of tension as when Dave must venture out into a zombie-infested area to retrieve Felix’s medication and save the life of his sister’s kid. When there’s a tractor involved on the farm, you know you’re going to get some quality kills with that vehicle and this film doesn’t disappoint. And after so many zombie comedies, I gotta say it’s pretty parred for the course that a zinging musical number is what ultimately saves the day, sung by a sunny and adorable Nyong’o that even I couldn’t resist her persistent charm for a film of such tediums.

Little Monsters more or less delivered on its advertisement, for all the mild chuckles and usual motions of the poetically decaying zombie apocalypse picture. It has some witty lines here and there and brashness that, while not as biting as it could’ve been, keeps the film’s cynical sensibilities as sublime as the gore. Even for being the usual song and dance, there’s just enough song to make the dance worth doing.