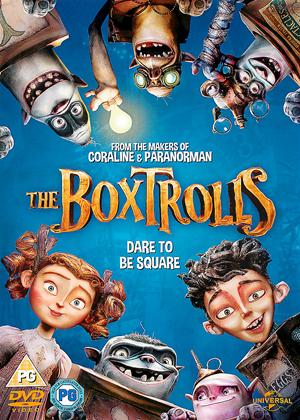 Synopsis:
The Boxtrolls are monsters who live underneath the charming streets of Cheesebridge, who crawl out of the sewers at night to steal the town's children and fine cheeses. At least, that's the legend the townspeople have always believed. In truth, the Boxtrolls are a community of lovable oddballs who are raising an abandoned human boy named Eggs as one of their own. When the Boxtrolls are targeted by a villainous exterminator who is bent on eradicating them, Eggs must venture above ground to save his unique family, where he teams with an adventurous young girl to save not only the Boxtrolls but the soul of Cheesebridge.
Directors:
Graham Annable, Anthony Stacchi
Producers:
David Bleiman Ichioka, Travis Knight
Voiced By:
Ben Kingsley, Jared Harris, Nick Frost, Richard Ayoade, Dee Bradley Baker, Steve Blum, Nika Futterman, Tracy Morgan, Pat Fraley, Fred Tatasciore, Max Mitchell, Isaac Hempstead-Wright, Elle Fanning, Maurice LaMarche, James Urbaniak, Brian George, Toni Collette, Simon Pegg, Lori Tritel, Laraine Newman
Writers:
Irena Brignull, Adam Pava
Studio:
Universal Pictures
Genres:
Children & Family

Reviews (2) of The Boxtrolls

Slow start, picks up and then surprises - The Boxtrolls review by MS

This film starts slowly to the point of wondering perhaps why you bothered. Give it chance though, you will hopefully be as surprised as I was to be drawn in to it. It really is a wonderful story and the animation is brilliant.

I am a big fan of LAIKA films and this was the only one I still had to watch from the company. I almost wish I hadn't. This film is not up to par with the rest of the studios offerings. What we have here is a painfully boring, unimaginative film that is slow and lacking seriously in action, comedy or emotional beats. The story itself is basic and the boxtrolls themselves are unfunny, lacking in heart and are a serious misoppertunity. The animation paired with the voiceover is distractingly poor. Not much about this film works. By the time I got to the last half an hour I just started fast forwarding through it because I just wanted it to end. Definitely don't waste your time on this one.

From the minds that gave us Coraline (2009) and ParaNorman (2012) comes the fantastic new 3D animation film The Boxtrolls (2014). Based on the children’s novel ‘Here Be Monsters!’ by Alan Snow, the story follows Eggs, an orphaned human boy who is raised by a society of strange and mischievous creatures called the Boxtrolls, and who must find a way to protect his family from the evil Archibald Snatcher.

No longer are animation films just for the enjoyment of children. I am twenty-three years old, and can say that this is my type of movie.

First of all, you cannot go past the brilliance of the animation. Laika, the American animation company founded in 2005, have created a very distinctive animation style. The generated scenery depth and character expressions are astounding, constructing life-like images of unreal creatures. Laika have found their niche, and would be foolish to change.

Of course, behind the animations are the talented voice actors. Rising actors Isaac Hempstead Wright (Eggs) and Elle Fanning (Winnie, Eggs’ human comrade), bring life to the characters purely through the emotion of their voices. Veteran actor Ben Kingsley (Archibald Snatcher), Nick Frost (Mr. Trout), Tracy Morgan (Mr. Gristle), and many more experienced actors and actresses breathe life into their characters, making each and every one unique and entertaining.

The animation may attract the audience, but it is the script that will keep them in their seats, and entertained for the full two-hours. The Boxtrolls, with their stubby legs and clad in discarded containers, speak their own gibberish language – perhaps an attempt to mimic the success of Despicable Me’s minion-language – and is the only downfall of the film, but it does not detract from the story and underlying moral of the film.

Over the past decade specifically, countries all over the world have focused on the environment and the issue of garbage. Recycling discarded materials into new products is encouraged, and that is where The Boxtrolls comes in. All films have a message within their story, a comment they want to make, and children’s films are no exception. This message might be a bit too complex for the younger children in the audience, but it is just another way in which this movie is appealing en masse.

The only issue that parents or guardians might want to look into before taking their child/ren to see this film would be what some reviews have called “grotesque” scenery. This relates to the sewer locations, and the darkness of the films colouring when below ground. It is nothing harmful, but younger viewers might dislike it.

Animation films, despite the complex and lengthy creation process, seem to be always coming out at the cinemas. New technology leads to new techniques, and we can see the change in animation and story complexity from Pocahontas (1995) to The Lego Movie (2014). The Boxtrolls, though not as esteemed as the previous two films listed, shows inspiring animation, engaging characters and story, and is a film that will entertain all ages.