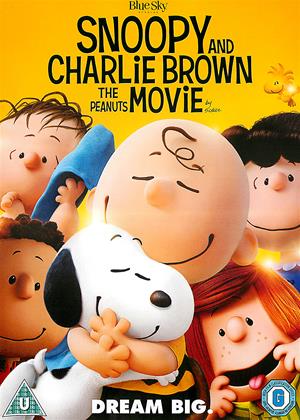 Rent other films like Snoopy and Charlie Brown: The Peanuts Movie

Sign up
Wallace and Gromit: The Curse of The Were-Rabbit

Reviews of Snoopy and Charlie Brown: The Peanuts Movie

The Peanuts are sacred ground for animation that was easy-going, amusing and just a simple joy. From the scribbled lines of Charles Schultz’s characters to the smooth compositions of Vince Guaraldi’s iconic jazz score, those original animated specials just had a warm and welcoming tone that defined Peanuts. The prospect of a new theatrical Peanuts movie in the current landscape of animated films both excited and terrified me. I adore the characters and wanted to see them back on the big screen once more, but didn’t want to see them reimagined with a modern makeover.

Thankfully, The Peanuts Movie remains true to its source much more faithfully than I expected. There are no inclusions of iPhones, social media or modern lingo. The setting seems to be stuck in the 1960’s the way the kids still use phones with cords and dogs still use typewriters (if dogs could write). The characters retain their iconic personalities as well. Charlie Brown is still the hapless dreamer, Lucy is still a bossy leader, Linus is still the blanket-holding voice of philosophy, Peppermint Patty is still the sports nut and so on.

There’s a generous nature in the way the movie doesn’t restructure itself to compete with today’s kids. It’s the timeless qualities of the characters that have entranced the young ones and keeps them hooked for years. There is no major updating of the characters because their personalities are relatable and loveable to any generation. There are no big names attached to the voice roster which remains true to the style of casting child actors in the roles - maintaining the relatability for children. There’s no marquee value to be gained from a cast primarily of new child actors, but they're all perfect for each role with their natural grace.

The story is standard for the likes of Charlie Brown and his dog pal Snoopy. The little red-haired girl has just moved in across the street and Charlie Brown desperately wants to win her heart. But his nervous nature and terrible luck presents a large mountain to conquer. He’s given opportunities to soar in popularity, but must also make the tough call of maintaining his honest nature. While Charlie Brown fights for societal acceptance, Snoopy does battle with the infamous Red Baron. At his red doghouse, Snoopy’s imagination literally takes flight as he assumes the role of a World War I flying ace to defeat his nemesis and save the beautiful beagle Fifi.

Though the story adheres close to the original formula of the animated specials, it still carries a fresh and moral message for kids without cramming it down their throats. Kids can relate their bad days to that of Charlie Brown who can never seem to do right, but his hard work and determination earns him the title of being a good man. Good deeds are not rewarded immediately and do not result in huge payouts, but they culminate to form character and pride that any kid would desire. There’s an admirable nature in how his goal is nothing too grand or far-reaching - he just wants to be a good person.

Being the first Peanuts theatrical movie rendered in CGI, the picture still manages to retain all of the style from comics and cartoons as well. The flat perspectives of the characters is perfectly preserved in a medium where the characters can now move through a three-dimensional space. It’s the little touches of stylistic choices that make the animation not only look, but move similarly to the original hand-drawn cartoons. Notice how the animators never once use motion blur despite a large number of quick motions and chase scenes. Look at how Pigpen’s cloud of dirt appears with bold lines rather than just being a simple particle effect. That being said, there are some moments to let the 3D world shine as when Snoopy stages a mid-air rescue during a large-scale attack on the Red Baron’s forces.

Finally, there’s the issue of the music. This is probably the only aspect that feels modernized, but not as much as you’d think. Guaraldi’s original numbers are present, but the rest of the soundtrack consists of a typical theatrical orchestra and two pop songs. It would be nice if there was a little more faith to stick with a full jazz score, but I realize that may be a little too somber to entertain the kids for 90 minutes.

The Peanuts Movie has plenty of wit and charm to equally please the nostalgic adults and first-time kid viewers. Older audiences will rejoice in the large amount of callbacks from The Great Pumpkin to No Dogs Allowed. Younger audiences will take pleasure in the simple joys of an overly imaginative dog and the plucky exploits of his depressed owner. But what’s most refreshing is that it’s an animated film with heart, morality and a great message for any kid that finds the simplest of goals just out of reach. It’s a perfectly cozy picture that’s worthy of a mug of hot cocoa to sip alongside A Charlie Brown Christmas or It’s The Great Pumpkin, Charlie Brown.