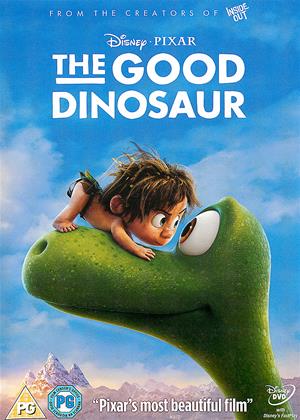 Reviews (4) of The Good Dinosaur

Kids like Dinos - The Good Dinosaur review by NC

Dinos that are into farming now. Pixar always do good stuff for the kids, with some moral tone thrown in.

Best Cartoon Film of 2016 by far! - The Good Dinosaur review by CS

This has got to be one of the best movies I've seen this year, if not the best cartoon film of 2016! Slated by the critics and allegedly a commercial failure, probably because it doesn't fit the usual overblown hype and formula of most Disney outings! I actually really enjoyed watching this, it made me laugh and cry and was full of sentiment and emotion. The Dinosaurs themselves are styled in quite a simplistic way, which contrasts nicely with the incredibly highly detailed backgrounds. The soundtrack is brilliant, creating the perfect mood for each sequence and driving the film along nicely. As usual with American cartoons, there is a message here, a peculiarly American thing, as though they have a thing about difference and being yourself, because they are afraid, unlike European cartoons, to explore anything deeper! A great film for adults and children alike. The voice actors did a really good job and work really well with their characters, but there is much less dialogue in this film than usual, less reliance on the stock in trade gags, and much more emphasis on emotion and quality of drama and the story itself. Which in my mind make for a more mature, emotional and better quality film all round. I loved watching this and would highly recommend it to anyone who loves quality cinema!

Another Pixar Disappointment - The Good Dinosaur review by MD

Remember the days when Pixar could do no wrong, and every movie they turned out was different, engaging and a thoroughly pleasurable experience? Ah, nostalgia! Since Disney aquired the studio, things have got a lot rockier, what with sequels to the earlier big hits, the pretentious and far too self-important "Inside Out", and now this.

It is not a bad film, and certainly younger children should enjoy the dinosaurs, but it is so lightweight in comparison to previous offerings. The story is really too thin to fully engage you, there seem far too many scenes that are forced and jarring - part of the problem here, I think, is that they were trying to spoof famous scenes from other animated films - and the theme of a weak, unvalued individual proving himself in a series of tests and trials just comes across as, well, unoriginal and uninspiring. Also, the amazing humour and nod to adult sensibilities of the major Pixar movies has gone completely AWOL.

Maybe I am being too harsh; even Shakespeare did not write masterpieces every time he put pen to paper! Unfortunately, though, having raised the bar so high, Pixar is now looking like just any other animated film maker, and that is sad.

So this is watchable - the part real photography part animation is impressive. But it is ultimately very odd to have brontosauruses living as a family unit and farming; and T-rexes ranching bison. And baddie pteradactyls too.

But if you can suspend your disbelief at that nonsense, it is so-so - all the usual plot devices are here, with a young kid trying to find is way home and save his family.

And some violence that wouldn't be allowed in a middle grade children's book (father dying, cut create eaten, head ripped of a beetle).

So watchable but nowhere near as good as classic Pixar. Maybe watch with the Land Before Time and old Disney animation also with talking dinosaurs.

The Pixar studio is always willing to try new ideas no matter how strange or unconventional they may be. The Good Dinosaur is another prime example. Only their minds could conceive something so out there as western with dinosaurs. And while it’s certainly not one of their better pictures, it’s an admirable effort that will most likely go down as the studio’s more underrated animations (or at least their darkest).

The premise starts out solid enough with an alternative timeline where the asteroid that made the dinosaurs extinct just narrowly misses Earth. Millions of years later, dinosaurs have evolved. Not to the point where they’re wearing clothes and establishing governments, but they’ve mastered the art of farming, rustling and communication. The little dinosaur Arlo is born into a family of farmers that plow fields with their snouts and chop down trees with their tails. His father has high hopes that his son will prove himself and conquer his fears of feeding chickens. But when he fails in exterminating a human pest that has been devouring their crops, Arlo loses his father to a flood during the hunt. Angered and frustrated, Arlo hunts down the small human boy that was responsible for the death of his dad. His rage, however, sends him far down river where he’s lost his way home. Far from his family where he is desperately needed to tend the fields, Arlo must make the long and dangerous journey back without a clear direction home.

The human boy, who Arlo later dubs Spot, becomes Arlo’s unlikely pet on the adventure back. Their relationship develops exactly as you’d expect - Arlo grows to love Spot as they share similar lives. But what’s admirable about their friendship is how subtle it is portrayed. Spot cannot speak English as opposed to Arlo and he never learns to speak either. And yet they learn to converse and share stories with very little dialogue. When Arlo discusses his family, Spot responds that he had a family that died without uttering a single word. The two use sticks to represent their family members, knocking down the ones that have passed and burying them in the dirt.

There are some darkly comical moments to showcase the transition from enemies to allies. When Arlo is hungry, Spot tries to fetch him food despite Arlo’s initial reluctance for help. Spot brings back a moving bug, but Arlo is disgusted by its disgusting mouth. Spot tries to make it better by ripping off the head, but it only makes Arlo more repulsed. Many audiences will probably be questioning whether or not this is a family film when it showcases bug decapitation. They’ll probably be even more questioning when Arlo and Spot have trippy visions after consuming bad berries. But this is ultimately what makes The Good Dinosaur so appealing with its uncompromising setting. This is a world of dinosaurs which, despite their advanced knowledge of gathering food and making shelter, will still sink their teeth deep into their enemies.

Arlo and Spot run across several unique characters on their journey that it’s a bit of a let down they’re reduced to sequences. A triceratops collecting a posse of creatures attempts to barter for the human child. A pack of carnivorous birds chase storms under the disguise of a rescuers that devour animals caught in the disaster. A group of T-Rex dinosaurs hire on Arlo to help retrieve their herd from a group of rustlers. As if it weren’t obvious that this picture wasn’t a western, that point should be hammered home in this sequence where a T-Rex voiced by Sam Elliot stomps across the land in a manner similar to a cowboy on a horse. The pastiche angle to the script does keep things fresh, but I’m still of the opinion that Sam Elliot’s character could have carried this picture.

While the character designs are nothing all that intricate, it’s a bit of a blessing in disguise how it better showcases the environment. Pixar’s environment designers are presented front and center for what is easily their most breathtaking work. Everything from the mountains to the waterfalls to the grassy plains appears so photorealistic that any scene without characters could easily fool the eye that it wasn’t animated. It almost feels out of place the way such a beautiful interpretation of a dinosaur world is the canvas for simple designs.

In the Pixar pantheon, The Good Dinosaur is good, but not great. That being said, even when Pixar isn’t at their best, the studio is still leagues ahead of it competition. I have to commend the creatives behind the picture that wanted to tell a darker and stronger story that never takes the easy or silly way out of its somber tale. There’s a natural grace to its tale of courage that kids and adults can both relate to in the exciting sequences and tearful realizations. It never quite duplicates that sense of otherworldly adventure in The Land Before Time, but, wow, does it come close.