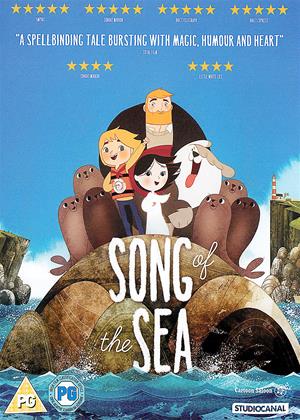 Reviews (3) of Song of the Sea

I loved this cartoony film.. its an Irish folk tale, beautifully told with lovely animation. It actually brought a tear to my eye.. Magical! :)

Beautiful - Song of the Sea review by lc

A visual treat - Song of the Sea review by Mehitabel

Visually, this weaving-together of various Gaelic folktales is a joy and unlike anything I've ever seen before. It's worth watching for that alone. The story is enjoyable; the mere idea of women who turn into seals and sing hugely Important Songs when they put on the right coat is irresistible. There are laughs too, most particularly the three-piece band of frustrated fairies with a habit of turning to stone.

The only disappointment was the Hollywoodish way the children were drawn and voiced. Big eyes, spherical heads, hyper-squeaky voices.. It had a cutesy-ness out of keeping with the rest of the film and felt a bit like a sell-out.

This is not, all in all, a children's film. Any of the small kids I know would have lost interest quite quickly; whimsy is a sophisticated concept, after all. But this is not to talk the movie down. But it's best enjoyed in a kiddie-free environment, where you can get lost in the gorgeous worlds it creates with no little voices bleating "I'm BORED!" to bring you back to earth.

Song of the Sea review by Mark McPherson - Cinema Paradiso

Cartoon Saloon is slowly rising up as one of the major contenders in animated features. Director Tomm Moore managed to capture Oscar-worthy attention with The Secret of Kells, an Irish fairy tale that was nominated for Best Animated Feature. His method must be surefire as his second animated feature for Cartoon Saloon follows the same formula. It’s another animated tale of Celtic folklore with the trademark artistry of Moore’s shapely style, once again garnering Oscar attention. It also manages to duplicate all the same strengths and flaws as Kells, making for a film that’s frustrating for only being good when it should be great.

The story wastes no time diving head first into the lore. Young boy Ben is finishing up his painting of various spirits and gods for his soon-to-be-born sister’s bedroom. But when the baby finally comes, his mother mysteriously disappears into the ocean of his family’s lighthouse/home. Years later, Ben has grown bitter towards his now six-year-old sister Saoirse for her muted voice and strange obsession with the sea. His dad hides his sorrow in a pint while his grandma pokes and prods the children for safety and etiquette. One night Saoirse discovers a fluffy coat in the closet. She puts it on, steps into the sea and magically transforms into a white seal. The discovery of being the offspring of a mystical Selkie is exciting to her, she soon becomes the target of other fantasy beings that want her power. Ben must now protect his sister from this new world of spirits and legends, living up to the responsibility of being a big brother.

The two find themselves on their own as Ben struggles to escort a fading Saoirse back to the sea when their grandmother drags them into the city. On their quest, they run across many strange and unique fantasy entities. A group of musical trolls play their melodies for both Saoirse and an audience of stone statues. A wicked witch literally bottles up emotions in jars with her hordes of evil owls to do her bidding. One of my favorite characters is a hermit of endless hair that can spin all sorts of visions from his many threads. Ben picks up a strand and he’s provided a startling revelation on his mother disappeared, additionally lamenting on how he could be a better sibling.

The art style of reflects the trademark flat and painterly style Cartoon Saloon is quickly being known for. The characters appear in simple shapes, but with bold colors and fluid movement. Take a look at some of the subtle moments as when Ben becomes annoyed by Saoirse’s breathing while he doodles on the windy beach. It feels like an illustrated storybook given life as only the two-dimensional medium can convey. Take note of the backgrounds as well that embody the staging of a children’s illustration the way the background use different colors, textures, perspectives and cuts off around the edges. There’s rarely a background painting that didn’t catch my eye.

On the level of its animation, Song of the Sea is so darn mesmerising that it’s maddening the story doesn’t match that quality. I liked where the fantasy element took these kids and yet I expected much of its charm. There’s a quiet whimsy to all this beauty that is perhaps a tad too somber, even for a film about coping with loss. How come when Saoirse is revealed to be a Selkie it’s not astounding to anyone except Saoirse? I realize they talk an awful lot of these myths to the point where they seem to be commonplace in this world, but would it kill Ben or his father to be just a tad amazed that their daughter can transform into a seal? Can the film slow down just a little to take in all these creates rather than jump directly from exposition to plot importance with each one? This movie appears so engrossed in its wonder it forgets to add some grounding.

Song of the Sea is a true work of art, but it may be better appreciated by animation enthusiasts than the whole family. I want to recommend the film more especially since it’s a very refreshing change of pace from the manic and frenetic tone of today’s fast-paced animated films. It’s beautifully rendered and calmly directed with a wonderfully gentle tone and atmosphere. The problem is that it may perhaps be too quiet for its own good. There is some real artistry and craft in such a presentation which begs for a writer to bring some much needed enthusiasm to a story that feels far too passive.