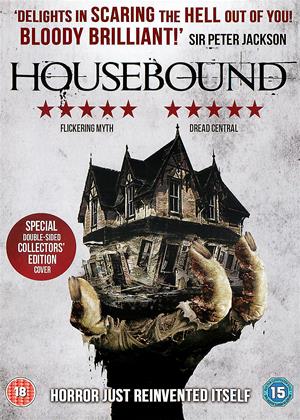 This film is further evidence that, probably thanks to a certain Hobbit with a very precious ring, New Zealand is waking up to the fact that it has a movie industry the products of which might be of interest to people in other countries too. Which is good news for anybody who would like to see more English-language movies that are basically mainstream, yet are not straitjacketed by the Hollywood sausage-machine and are thus capable of being intelligent and original. We've already seen some fantastically imaginative films coming out of New Zealand recently, and it wouldn't surprise me at all if the long-overdue replacements for Tim Burton and Terry Gilliam are Kiwis.

That being said, "Housebound" isn't the best of them by a long shot. It isn't anywhere near as scary, suspenseful, or innovative as "The Babadook", or even remotely as funny as "What We Do In The Shadows". By the way, although the summary on this site doesn't make this clear, it's a comedy. Well, it is some of the time. Its biggest problem is that it's trying to be too many things at once, and they don't quite mesh. For starters, it's got an exceptionally bad case of Birdman Syndrome, by which I mean the promotional artwork prominently features an extraordinary-looking person who turns out to be barely in the movie. And in this case we're literally talking about "blink and you'll miss it". Which is a pity, because the excellent idea that the most clichéd "ghost" imaginable, somebody with a sheet draped over them, is absolutely terrifying in a situation where there are lots of things covered in sheets and suddenly one of them moves, is criminally underused, and not as frightening as it should have been, and would have been if this first-time director hadn't attempted to make several movies at once.

There are a couple of brief bits of gore, but this film wouldn't have come within a chainsaw's length of an 18 certificate if the maladjusted heroine hadn't used the f-word so much. Mostly it's trying to be a black comedy that keeps changing gear in order to be a horror film again for a while, or a whodunnit we don't really engage with or care about because the murder in the backstory is genuinely appalling, therefore it can't be shown to us since that would make the film truly horrific after all. And there are way too many nods to other well-known horror movies, including a hugely important plot twist involving the truth about who and what the sheeted phantom really is that owes so much to a lesser-known film by a very famous horror director that I can't even name the director in case it's a spoiler.

On the other hand, it's lively, inventive, and never boring for a moment, so you'll definitely get your money's worth. It's just not as funny or as scary as it thinks it is because it's trying to be both at the same time. For a master-class in how to do something vaguely like this if you're a first-time director with no money who really is a genius, see Guillermo del Toro's extraordinary debut feature "Kronos". For a truly bonkers no-budget horror comedy which I think may have been a major influence on "Housebound", see the uniquely deranged "Spider Baby".

Horror with a sense of humour - Housebound review by TJ

If Nick Park (Wallace and Gromitt fame) ever made a horror film it'd be a lot like this. It's on the cusp of being scary but can't resist a bit of comedy.

If you liked Tucker and Earl vs Evil you'll enjoy this.

Sophisticated house of horrors - Housebound review by AS

Housebound. not as tedious as it sounds... - Housebound review by porky

As a sufferer of Agoraphobia I did think it was gong to be rather Harowingly Claustraphobic but it was actually a rather Darkly Funny Surprise.

A Nasty ,Aggressive, Angry Petty Criminal gets sentenced to live with her Dull Parents in House Arrest for 8 Months as punishment for an attempted and failed robbery .

Is the House Haunted ?

Miss NO Charm and her slightly gormless Mother and Very quiet Step Father soon find out .

Some Shocks, Some Twists and Some Gore ...but mostly i found it Hilariously Funny .Nothing Slapstick or Comedic as such , but Funny as its possible to be with a Nasty Bitch being Bitchy about Everything and not giving a Fig who she upsets.

From New Zealand comes a brilliant new horror/comedy film Housebound. Even though a lot of really great films come from this small island country, it has yet to truly make its mark on the world film stage, but it definitely has the talent to take it there. Housebound will give you a scare, then make you laugh. You can’t ask for much more.

Like other elements of this film, the story at first appears to be one we have seen before, but with a twist. Kylie Bucknell (played by Morgana O’Reilly) is a troublemaker. She is a young-adult that has yet to learn responsibility, and finds herself in front of a judge. Not only does he sentence her to eight months home detention, but she must serve it in her old family home, living with her quirky mother. Things go from bad to worse when Kylie can no longer disregard her mother’s fears, and they discover the house is indeed haunted by vengeful ghosts; and together with an amateur ghost hunter, they will fight to survive and reclaim the house.

The amount of remakes and sequels that flood the film industry drives me crazy. When you see something as different as Housebound, it is refreshing. The film is actually a feature debut for writer and director Gerard Johnstone, which shows that we need to let more new-comers into the industry, who are capable of bringing new ideas and techniques.

A lot of films try to juggle horror with comedy, but not many are successful. Johnstone has named many horror films as his inspirations, but came up with the idea for this film after watching the television show Ghosthunters. He has introduced us to characters we think we know, but has then given them twists that keep us watching.

Bringing these characters to life is the good work of a relatively unknown cast. You probably will not have heard of their names, but do not be surprised if you hear about them a lot in the future.

The only bad thing about having such good actors that create these interesting characters, is that the secondary characters tended to overshadow the main characters at times. This was made even worse by their characters feeling fake and silly. But no film is perfect.

Reaction from critics and reviewers has been predominately positive. It has won numerous awards at various film festivals, and has even had big-name stars like Peter Jackson (The Lord of the Rings) commending it.

New Zealand has delivered us an awesome film that most will love. Their modest budget - which they won - has proven that you do not need a lot of money to make a great film, and that creativity and talent is quite capable of winning the audience. The combination of horror and comedy is spot-on, and everyone should go and watch this film.