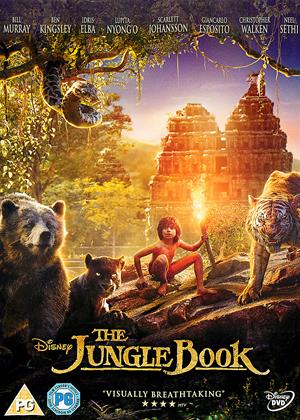 Reviews (8) of The Jungle Book

Great Entertainment For All Ages - The Jungle Book review by PT

Bill Murray as the lovable lump Baloo. Idris Elba, a super baddie, in the form of Shere Khan. Christopher Walken as the megalomaniac King Louis. Ben Kingsley, the kindly disciplinarian and mentor to Mowgli, Bagheera. Scarlett Johansson, the evil Kaa, disguising her true intent with her dulcet tones. This is my synopsis of the wonderful personalities the main actors brought to their superb CGI characters.

Not forgetting Neel Sethi, who was great as the man cub Mowgli.

I know the original well and wasn't sure whether to watch this. I'm glad I did because it was terrific. Full of fun and adventure, pathos and jeopardy. Wonderful CGI. Mowgli's American accent grated on my ears but I managed to overlook it in the excitement of the story. I liked the way the songs from the original animation were referenced but the story was sufficiently different that the audience didn't always know what was going to happen next. Highly recommended.

Excellent CGI but the characterisations are spot on - with a hint of musical humour that harks back to the original film. Poignant, heart-warming and a feel-good factor. Very highly recommended

Mowgli from Maine - The Jungle Book review by NC

Amazing graphics now. Texture has improved now and hard to fault. The US films always have to have strong American accents, of course. Mowgli straight out of Brooklyn. Sabu, the original, had an Asian air that was slightly more in keeping.

Jungle book love it.. it may be an old story but one of the best films ever made of the fab jungle book story, loved it.

For all the family - The Jungle Book review by gazmb

The CGI is brilliant in this proper film version of the Animated Jungle Book. The acting is very good from the main actor , not his fault but you would of thought they would have chosen somebody with an Indian style accent . That's my only fault really.

A charming remake, better than the original animated version. The cgi is superb, you really do believe the animals are real.

Many references to the Disney version , including a few songs, and the young Mowgli does well, if a bit too American for some.

Exciting too, and a superb family film.

The Jungle Book has finally received the film adaptation it deserves. There always seemed to be a little something off about every interpretation from Disney’s animated picture to Disney’s live-action attempt of the 1990’s. Sometimes the animals just didn’t look right and other times the story just wasn’t hitting the right notes. But Jon Favreau seems to have ironed out all the kinks of bringing The Jungle Book to the big screen.

In Favreau’s take, we’re presented with a fusion of both the books and original animated movie. There’s a sense of treaties and hierarchy among the animal society that echoes the dark tones of the book, but still takes the time enjoy a musical number about the bear necessities. It’s still about Mowgli and his animal allies/enemies, but with an equal sense of adventure and fun. The opening scene perfectly encapsulates this spirit as the human boy Mowgli is seen running through the forest as a mini-Tarzan before he is playfully tackled by the panther Bagheera (voiced by Ben Kingsley). It’s a sequence that’s exciting, emotional, intelligent and fun - the way The Jungle Book should be.

The story isn’t muddied up with any useless subplots or the need for an epic battle sequence. It’s a tale played straight as the animals of the forest vie for Mowgli. Some want him dead as with the evil tiger Shere Khan (voiced by Idris Elba) and some want his power of fire as with King Louie (voiced by Christopher Walken). Others, however, just want to hang out and gorge on honey as is the case with the lovably casual Baloo (voiced by Bill Murray). All of which are presented with a great deal of character and motives that not a single one of them feels passive or overblown. That’s saying a lot for a voice cast that includes Bill Murray and Christopher Walken, both of them with their own musical numbers. The prospect of Walken singing has probably conjured up smirks and giggles just from reading such a statement, but, trust me, he can sing rather well.

As you may expect from such a cast, the majority of the characters are computer-generated animals. This could have been a major downfall of the picture, but the perfect use of Disney’s animation blending make this a crowning achievement of the picture. There’s a brilliant balance in conceiving a wealth of talking animals that are realistic enough to move about Mowgli, but still exaggerated enough to speak without a distracting Clutch Cargo effect. It’s a fantasy world that is easy enough to buy into which is saying a lot for a movie with a giant-sized orangutang that eats stacks of bananas like berries. The detail in special effects has increased to such a high level of realism that I doubt many first-time viewers will initially notice that the entire forest was computer generated as well.

The Jungle Book is that rare case of a live-action adventure picture that is just as much a visual spectacle for the kids as it is a meaningful tale of great virtue. But, ultimately, it’s just a darn fun experience for the whole family which seems to have become a rarity with such pictures of this nature. As of this writing, Andy Serkis has his own version of the The Jungle Book planned for next year that he promises will be more darker. I’m not too sure how I feel about that as Jon Favreau’s version present accomplishes a daring balance of the silliness and the darkness. Perhaps The Jungle Book and other book adaptations don’t need a gritty tone to be relevant or entertaining. As Disney proved last year with their stellar version of Cinderella, you just can’t beat a classic and this is another winner of a picture that celebrates and acknowledges rather than tears down and rebuilds. In short, it’s The Jungle Book movie the world deserves.