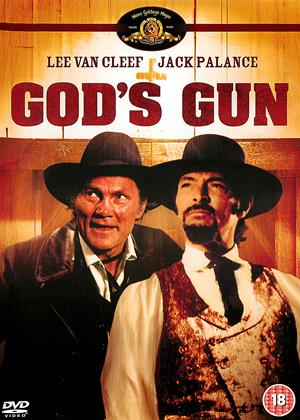 For some unexplained reason, even though spaghetti westerns were Italian rip-offs of a quintessentially American genre in the first place, no country other than Italy seemed to be able to get the formula quite right, including America. So when Israel tried making what might be called matzo westerns if enough of them existed to require a name, the results were predictably underwhelming.

During the 27 years it somehow managed to stay in business, Cannon produced dozens of the tackiest and most ill-advised movies ever made, its trademark being an incurable tendency to jump on cinematic bandwagons just a little bit too late, and try to infuse new life into a fad that had already run its course with an incredibly stupid gimmick. Hence that movie about the aerobics instructor who gets possessed by an undead ninja. As you do.

So when I tell you that this film is a spaghetti western produced by Cannon and made in Israel, you won't be surprised to learn that firstly, it involves a gunfighting vicar pretending to be a ghost, and secondly, it isn't terribly good.

What may surprise you is how very, very bad it is, given the presence of Lee Van Cleef, Jack Palance, and, if you know your spaghetti westerns, the director of the Sabata Trilogy, all of whom had plenty of experience making very entertaining films in this genre with barking mad plots. I can only assume that, given the porn-movie levels of incompetence displayed by most of the crew and just about all the locally-recruited cast (viewers who didn't know it was made in Israel probably spent the whole film wondering how the obvious Jewishness of everybody in this supposedly Texan town was going to affect the plot, and being baffled when it never did), they simply gave up. Though to be fair, Lee Van Cleef does his best, despite being saddled with two appalling wigs, one of which is meant to make him look like Jesus, and a sidekick who would have been a more appropriate partner for Lassie. But his heart clearly isn't in it.

Jack Palance appears to be simply messing around. His overacting is so extreme I honestly thought his character was supposed to have senile dementia, but in a "this movie is beyond help so I might as well have fun" kind of way that isn't much fun for anybody else. Sybil Danning contributes a few seconds of partial nudity, hence the obsolete 18 certificate, and is otherwise just Sybil Danning. As for adorable teen moppet film and pop star (and a few years later, washed-up junkie has-been) Leif Garrett, he's so dreadful that halfway through the movie his character mysteriously loses the power of speech, presumably the director's last desperate attempt at damage limitation. Though inexplicably Cannon made another equally abysmal Jewish spaghetti western co-starring Lief Garrett and Lee Van Cleef ("Kid Vengeance" if for some reason you're interested).

As for the potentially hilarious business of our hero pretending to be his twin brother back from the grave to avenge his own murder, that only features in the last quarter-hour of the film, and is one of the few parts of it where the director's enthusiasm rises slightly above zero. The rest consists mainly of terrible actors talking too much, misplaced melodrama that slows down an already sluggish story, a few ineptly staged shoot-outs, and Leif Garret's thankfully dialogue-free non-adventures in a very dull desert. Oh, and there's a lengthy scene involving several attempted rapes which the cast seem to be deliberately playing for laughs. This embarrassing travesty makes even the worst Italian westerns look like masterpieces. If you want to see a proper spaghetti western with lots of daft gimmicks and a totally bonkers plot starring Lee Van Cleef, watch the first two Sabata movies instead. If you want to see Leif Garrett in anything, you're beyond help, so you might as well watch this.