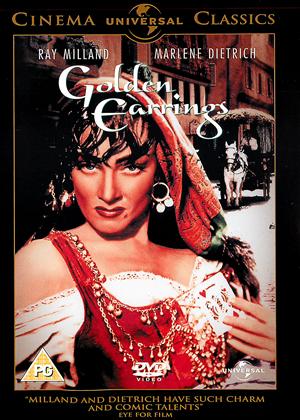 Synopsis:
In a film that stirred up the censors, Marlene Dietrich plays a lusty gypsy named Lydia, whose caravan makes a romantic refuge for British agent .Ray Milland. Escaping from the Nazis, Agent Ralph Denistoun (Milland) and his partner arrange to meet in Stuttgart to purloin Hitler's poison gas formula. On the journey, Denistoun meets Lydia, whose uncanny knowledge of the Black Forest keeps him out of harm's way. Disguised as a gypsy, complete with glistening golden earrings, Denistoun arrives at the designated meeting place, which is glutted with Nazi soldiers. Only with the help of the extraordinary gypsy woman can he finish the mission that will make him a hero.
Actors:
Ray Milland, Marlene Dietrich, Murvyn Vye, Bruce Lester, Dennis Hoey, Quentin Reynolds, Reinhold Schünzel, Ivan Triesault, Hermine Sterler
Directors:
Mitchell Leisen
Studio:
Universal Pictures
Genres:
Action & Adventure, Classics, Drama

"First you beat me? And then we kiss and make up?"

Between those two sentences, Marlene Dietrich (as a scarf-sporting Gypsy, Lydia) opens eyes even more widely, gleamingly so - which answers the question, "how good was Marlene Dietrich?"

Most likely, with anybody else aloft a caravan at the reins of a white horse, Golden Earrings would be dismissed as preposterous - all the more so as fortune-reading Lydia has prevailed upon British agent Ray Milland to sport earrings to pass himself off as a fellow-Gypsy as they trot through the pre-war Black Forest while he and a separated accomplice are on a mission to obtain a poison-gas formula so that it is not used in battle.

The earrings give Milland a strange, even camp aspect - and camp is doubly the word, for they meet other Gyspsies and there is rowdiness beside the evening's bonfire, with the title song (very much a Hollywood product) making an appearance now and then. For something which might seem a thriller, much of it takes place aboard that caravan, and one's interest is maintained by director Mitchell Leisen, who made a series of terrific movies during the Thirties and Forties (notably Midnight) before slackening into work on television series.

Do not fall into the trap of ridiculing Golden Earrings. Celebrate a Hollywood that laid money across the palms of all concerned.