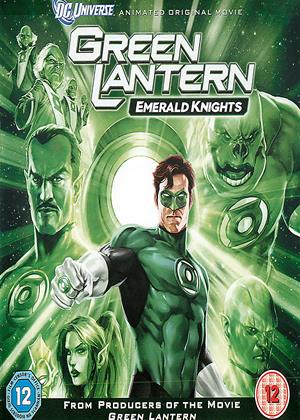 In this animated anthology film, the Green Lantern lore gets a bit of an animated exploration, allowing for a slew of different superhero stories. While this is a rather unorthodox DC Comics movie, considering it’s bookended by a story involve Hal Jordan saving Oa, I always relish such treats as anthologies. Considering how deep the Green Lantern lore goes for spanning countless galaxies and species, there’s a lot worth exploring in these segments.

While preparing to defend Oa against the evil force of Krona, Hal Jordan is tasked with inducting the rookie of Arisa into the ranks of the corps. To calm her nerves while they prepare to fight such a threat, Jordan gives her a bit of a history lesson by covering various stories in Green Lantern legend.

He starts at the very beginning with the first Lanterns ever chosen to don the green rings capable of such galaxy-protecting power. One of the first four ever chosen was a mere scribe. Known as Avra, he is not an adept warrior or skilled genius that his being chosen by the Guardians comes as a baffling choice. Though an unlikely hero, Avra soon proved himself to be a powerful Green Lantern when facing off against the Dominators. The story relates back to Hal by Avra’s ring having been passed down to Abin Sur who in turn passed it onto Jordan.

Hal then gives Arisa a history lesson in the gruff trainer Kilowag and why he’s so accomplished. Kilowag was once a rookie as well and found himself placed in a dangerous situation when protecting refugees from invaders. Under the command of Sergeant Deegan, Kilowag learned first-hand what it meant to be a leader and how to value teamwork.

Next up is Laira, a princess who proved herself to be a warrior. Then came Mogo, the only planet-sized member of the entire corps. Then, of course, there’s the tale of Abin Sur which is rather intriguing considering he fought against Atrocitus, the criminal who would later lead the Red Lanterns, and fought alongside Sinestro, the Green Lantern who later come to utilize the yellow power of fear for his own corps. Finally, everything comes back to the armada of Green Lanterns defending Oa in a grand space battle.

Emerald Knights does divide up much of its stories that there isn’t a lot of room for the character arcs to progress at a steady pace. With a running time of only 84 minutes and with six stories to tell, there’s not exactly a lot of breathing room. While not all of the stories work with this premise, the presentation remains as robust as any DC Comics animated movie. The voice cast is especially powerful this time around. Geeky fans will be pleased to hear Nathan Fillion finally voicing the role of Hal Jordan, a role that he seemed destined to play. Other highlights include Elisabeth Moss as Arisia Rrab, Jason Isaacs as Sinestro, Henry Rollins as Kilowog, and Roddy Piper as Bolphunga.

Watching Emerald Knights mimics that feeling of picking up a handful of comic book singles and just thumbing through them. You get a little bit of the best stories from the Green Lantern comics run in this film, including a few from Alan Moore. As a Green Lantern fan who will humbly admit to being won over by such depictions of characters and stories I’ve adored from the comics, I fully admit that my love of this film may be a guilty pleasure. At the very least, it’s a solid crash course for anybody who has yet to take the dive into the deep green pool of the warriors of Oa.