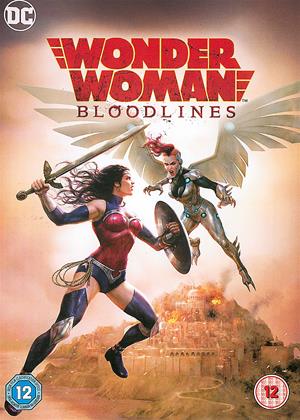 It’s been quite some time since Wonder Woman had her own solo animated film, the last one being in 2009. This version is a bit different in that it takes place within the DC Animated Movie Universe. Well, okay, maybe not completely different considering it’s the first solo film for this character who appeared in a prior ensemble picture, harkening to the DCEU. But for those non-DC fans, all you need to know is that this picture is a mix of Wonder Woman’s origins and an action story that involves a handful of her familiar villains.

It’s a bit of a shame considering this is the third Wonder Woman movie ever made and, once again, it retells her origins. Do we really need this? It’s the same deal as before. Diana Prince lives on the island of Amazons, Steve Trevor is a pilot who stumbles onto the island, and Diana soon disobeys her people to become Wonder Woman in the world of man. By now, everybody should know the familiar story in the same way everybody knows the origins of Batman and Superman. This exposition is such an unneeded intro that it wastes a good 15 minutes before the main title shows up and we’re all up to speed.

The story that follows is nothing all that new or fully engaging. It starts off with an interesting angle, where a teenage friend of Wonder Woman ends up going down a dark path. It isn’t long before this innocent kid turns into a punk drug dealer. And in the DC universe, well, the next step is becoming a supervillain. In this case, she becomes the cybernetic villain of Silver Swan, promptly stating her name in case the metal wings didn’t make it obvious. So there’s some personal gain for Wonder Woman to turn this cyborg criminal around, especially with some pathos involved.

If only the film were just about Wonder Woman battling Silver Swan the way the cover implies. More villains are thrown into the mix for a fairly standard plot of supervillains seeking out and wanting to destroy the island of the Amazons. The villains for this mission include Doctor Poison, Doctor Cyber, Giganta, Cheetah, and the all-powerful Medusa. They simply want to rule the island and little more. If they only had some personality, their scheme wouldn’t seem so bland but they don’t. They’re only present to fight Wonder Woman and offer some mostly-mild backtalk. Even the banter between Diana and Steve, meant to imply a quirky romantic relationship, is so dead on arrival that it’s almost pointless to play up this dynamic. Even the charisma backup of their lesbian co-worker offers little more than forced jokes that fall flat in every scene.

Where the film does succeed is in its action which isn’t a surprise at all given the credentials of the staff and their previous DC animated films. Medusa’s assault on the Amazon island is pretty brutal, featuring her turning warriors to stone and then stepping over them as she ascends in size. Wonder Woman has to become a bit clever during this bout and finds herself making some painful sacrifices to save the day. If only the writing could be just as clever.

It’s disheartening that after so many DC animated movies that have pushed boundaries where the theatrical films dare not tread, Wonder Woman: Bloodlines treads far too safe. It presents all the standard hallmarks of a theatrical film meant to be more lukewarm pleasing for general audiences, including the blink-and-you’ll-miss-it display of homosexuality that is brief enough that Disney would embrace it. As it stands, Bloodlines just feels like a ho-hum Wonder Woman adventure that finds little more than some mythical action sequences to stage and a chance to showcase more of Wonder Woman’s rogue’s gallery.