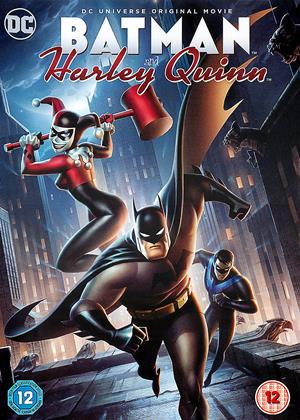 Reviews of Batman and Harley Quinn

Ever since Harley Quinn made her breakout debut on Batman: The Animated Series, she has become a standout villain of the franchise, quickly garnering her own comic books, toys, and a lead role in the villain ensemble film Suicide Squad. But how much is too much Harley? There are plenty of examples where the character is overexposed but none so in the animated realm than Batman and Harley Quinn. Here is a film in which the hero and the audience have to spend an uncomfortable amount of time with the conflicted costumer, annoying with her voice, irritating with her fart jokes, and questionable with her sexual night with a Robin. Oh, yes, they went there.

Presented in a style similar to that of Batman: The Animated Series, there’s a vibe as if this were a missing episode from the original run, too adult to air. Having served her time and now fully over the Joker, Harley now lives a life so low she’s reduced to wearing her same costume at a superhero-themed diner. It’s either that or she stars in adult movies. Both paths are shameful, but what more can a formal criminal do when her psychology degree doesn’t hold much water? One thing she can do is help Batman and Nightwing foil the latest scheme of Poison Ivy, currently building a formula to turn the whole planet into plants. And by help I mean she’ll point out a few places, sing a song at a club, and maybe betray the caped crusaders to get back in Ivy’s good graces.

As with many of Harley’s team-ups in the comics, this is a story that has way, way, WAY too much love for the character that filmmakers believe she can do no wrong. She can fight, sing, dance, reason, and even make genuine tearful pleas/confessions. Her cuteness is put on trial for many embarrassing moments. It’s hard to find her in a manner of misunderstood innocence in scenes where she forcibly ties up Nightwing to have sex with him and makes a smelly enough fart in the Batmobile that even Batman couldn’t weather. At least Nightwing has an odd bit of consent, but Batman seems to take Harley’s behavior with more of an “oi vey” attitude than his usual no-nonsense self.

That’s not to say to say that Harley can’t be sexual or even gross but there’s an extra sourness for setting this film in the same style of The Animated Series with a few of the same voice actors no less. The original cartoon was certainly adult, even risqué at times, but never to this absurdist degree. It’s enough to make one long for the constraints of television, where sexual gags and gross-out humor came with censorship to topple that it all the more satisfying and intelligent when it bled through. With the barriers down, what more is there to say? Her comics for years have been stressing her more explicit nature, even going so far as to better embrace her lesbian-toned relationship with Poison Ivy. An uncut Harley in animated form is not only missing of cute crass but nothing all that shocking either.

The film tries so hard to wrap Harley around Batman’s latest mission as a comedy that it never quite reaches that satisfying level of silly, merely petering out with ideas as it stirs up bloody fights and makes crude jokes. While the animation is still competent and the voice actors still a treat, even with the lesser new voice of Harley Quinn, there’s a disappointing stench of a chemistry between capes and clowns that never mesh into the madcap team-up the stellar opening sequence suggests. It’s the most cheesy of tribute films, stammering too much with its confounding clown to harvest any potential with a Batman team-up or disgraceful misuse of Swamp Thing and The Green. It’s as memorable as a one-shot single, good for one or two smirks and a few lukewarm action panels, but ultimately doom to be lost in the endless pile of Harley Quinn promotions.