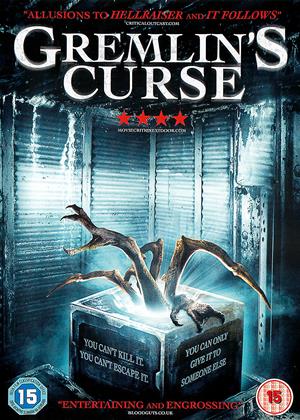 Synopsis:
Death comes in a small package in this terrifying supernatural shocker. When Adam (Adam Hampton) is given a mysterious box by his grandmother just before she dies he thinks it is just an old family heirloom. What he doesn't realise is that it contains a deadly secret, a supernatural creature, that will kill him and everyone in his family unless he can pass it on to someone he loves. Will Adam pass the box on, or can he be the one to break the age old curse?
Actors:
Adam Hampton, Kristy K. Boone, Geoff Barron, Christian Bellgardt, Katie Burgess, Aaron Bushong, Stacy Casaluci, Tyler Cobb, Chris Crane, Steven Dawson, Mary Eaton, Adam Faulkner, Audra Faust, Dustin Faust, Connie Franklin, Austin Greenameyer, Brian Hill, Valerie Humphreys, Tricia Jumonville, Chris Larson
Directors:
Ryan Bellgardt
Producers:
Ryan Bellgardt, Chris Hoyt, Josh McKamie, Andy Swanson
Voiced By:
Josh McKamie
Writers:
Ryan Bellgardt, Josh McKamie, Andy Swanson
Aka:
Gremlin
Studio:
High Fliers Films
Genres:
Horror, Thrillers

Wouldn't have been half as bad if the Animated Gremlin was a bit better . Very low level competence in CGI sadly.

But to be honest, Every Character in the Movie Deserved to DIE for being an absolute Moron.

Entertaining to a point but only by chance .certainly not worth a second look.

A strange box is delivered to a 77 year old granny who lives in a big house with her son, his wife and their two children. The man delivering the box, Uncle Jim (Mike Waugh), could said to be the black sheep of the family – which is some achievement, because this is one of the most appalling collections of human beings ever collected in one vicinity. From little blond poppet Charlie, who hides in a cardboard whenever his idiocy upsets someone, to the daughter’s boyfriend, who, on his way to announce he’s impregnated the girl, helps himself to the contents of the fridge and sits there eating with his ear-buds in.

As the film progresses, I understand the requirement to make the family as objectionable as they are for the sake of the storyline and their place in it, but it is impossible to side with this gang even when things get desperate.

The delivered box contains the titular CGI creature – not badly achieved, and as good an actor as most of the cast. The story involves giving the box to the one you love to save yourself. Uncle Jim gave it to his own mother, the charmer.

Only by the bizarre ensuing situation brings these horrible people together. It’s difficult to decide who I dislike the most, but it certainly isn’t the gremlin.

My favourite line goes to Detective Morris Patterson (Michael Anthony Page) when the plot is explained to him: “That’s the biggest load of f****** b******* I ever heard.”

The film is rather better than that though, and the ending is very effective. My score is 7 out of 10.