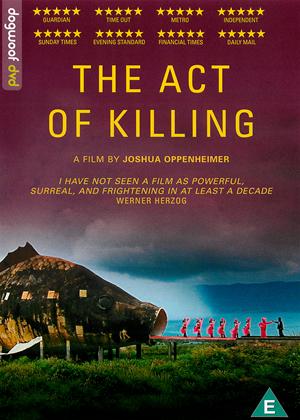 Synopsis:
When the government of Indonesia was overthrown by the military in 1965, more than one million people were killed in less than a year. Anwar and his friends were promoted from ticket scalpers to death squad leaders, and Anwar killed hundreds of people with his own hands. In 'The Act of Killing', Anwar and his friends agree to tell us the story of the killings. But their idea of being in a movie is not to provide testimony for a documentary: they want to be stars in their favourite film genres - gangster, western, musical. They write the scripts. They play themselves. And they play their victims.
'The Act of Killing' is a nightmarish vision - a journey into the memories and imaginations of the unrepentant perpetrators and the shockingly banal regime of corruption and impunity they inhabit.
Actors:
Anwar Congo, Herman Koto, Syamsul Arifin, Ibrahim Sinik, Yapto Soerjosoemarno, Safit Pardede, Jusuf Kalla, Adi Zulkadry, Soaduon Siregar, Suryono, Haji Marzuki, Haji Anif, Rahmat Shah, Sakhyan Asmara
Directors:
Joshua Oppenheimer, Anonymous
Producers:
Signe Byrge Sørensen, Joshua Oppenheimer
Others:
Joshua Oppenheimer and Signe Byrge Sørensen
Studio:
Dogwoof Digital
Genres:
Documentary
Awards:

Reviews (2) of The Act of Killing

wow - The Act of Killing review by MM

A really powerful and honest look at murder death and revelotion, as one old grandad faces the demons in his closet,

Don't be put off by the subject matter

A bizarre film, but the underlying message is profound and powerful - The Act of Killing review by MC

This really does need to be viewed along with Oppenheimer's other work on the Indonesian genocide, 'The Look of Silence'. 'The Act of Killing' takes an off-the-wall approach to dealing with the profound injustice of the mass murder that was committed in the 1960s. I think I made a bit of a mistake in deciding to watch the director's cut first, which is around 45 minutes longer than the theatrical edition. I found it very hard to watch some extremely unpalatable individuals crowing about murder and rape for over two and half hours.

What disturbs me is that Anwar Congo, the main focus of this documentary, does not appear to be a psychopath or deranged. Whilst he brags, boasts and otherwise appears unrepentant about being responsible for the often brutal murders of over a thousand people, it is clear that has been tormented by his memories of what he has done. This comes to a head when he himself plays the part of a "communist" being tortured and murdered. It's at that point that he understands what he put his victims through. What this proves to me is that anyone can be motivated to commit genocide if they are conditioned into believing that their victims are somehow evil and deserving of death. We in the West like to think that the Nazis were a one off, that it couldn't happen again. And yet it has happened, again and again, and often with the full knowledge of our governments. There is nothing to stop this happening whilst people continue to view the world as "us and them".

The Act of Killing review by Alyse Garner - Cinema Paradiso

From director Joshua Oppenheimer comes The Act of Killing, a film so morally bankrupt and wrong it took almost all my strength not to turn it off and watch a romantic comedy. Filled with distressing images presented by equally reprehensible people as if to show the artistic value of a documentary that is designed entirely to appal.

The film follows a group of Indonesian executioners who took part in the 1965 genocide of supposed Communists as they attempt to make a film about their actions for the Indonesian government. The group uses different approaches to tell their story as Oppenheimer follows them in their quest to create their disgusting art intent on seeing the true personalities of the people behind such violence.

Some may say this film needs to be seen as to stop or change a world or a country that has allowed things like this to happen. That’s a fair position yet The Act of Killing follows the perpetrators of some of the worst war crimes known to man as if they were ordinary citizens, it gives a voice to a group of people who feel little to no remorse for their actions as they revel in the fun of making a film about it. To fully emphasise the ridiculous nature of their enterprise and the disturbed exercise Oppenheimer is indulging in they proceed to re-enact their kills as part of a musical number Sick doesn’t even begin to describe Oppenheimers folly.

It’s not badly filmed or displayed, It’s beautifully framed and shows an Indonesia of beauty and freedom, a wonderfully emotional image on its own. Mixed with the sight of a man bragging that he could do whatever he wants because he was the winner in a one sided ‘war, The Act of Killing shows its true colors as a film that did not set out to but unintentionally glorified a dark moment in global history for the sake of entertainment, something I might add, you will not find watching this movie.