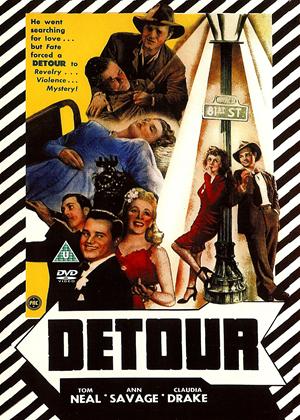 This is not a review of the movie itself, but of the dismally poor version of it Cinema Paradiso believes its paying customers deserve. Elstree Hill Entertainment is a DVD manufacturer not in any way connected with the famous Elstree Studios or the production of this or any other film, which churns out abysmally substandard don't-give-a-monkey's DVDs of old movies they can obtain worn-out prints of for peanuts. The end result looks like, and quite possibly is, a fifth-generation copy of something taped off the telly on VHS. At best. Some of their DVDs are even worse than that.

Since the Elstree Hill version of this movie appears to be the only one Cinema Paradiso have on offer, don't rent this film from this site because the lousy sound and picture quality will ruin it for you. Watch it properly anywhere but here. The same naturally goes for any other film this site lists on the general info page as having allegedly been made by a non-existent studio called Elstree Hill Entertainment. Though movies made by the real and illustrious Elstree Studios are a different matter entirely.

If the Cinema Paradiso quality control team read these reviews, maybe they'll take the hint and actually watch a few of Elstree Hill's horrible DVDs before buying any more of them, and perhaps even replace those they already have with versions that don't resemble the dodgiest of bootlegs in every way apart from not being illegal. To the best of my knowledge every film in their catalogue is easily available elsewhere, and you're doing your customers and your reputation a disservice by offering substandard garbage like this for rental. Yes, I know Elstree Hill undercut the prices of almost all their competitors, but sometimes you really do get what you pay for. And if you don't care, shame on you, because some of your customers do!

Perhaps the most famous poverty row feature ever made and a huge cult film. Its legend says it was made for $10000 in a week (though that may be an exaggeration). Tom Neal plays Al, a jazz pianist hitching from New York to LA, and thumbing a lift from a blowhard with a bad heart who dies. It features the great noir device of the person under duress taking on the identity and possessions of another, and then finding themselves in far more trouble than they ever were. In turn, Neal picks up Vera (Ann Savage), who herself had a ride with the dead driver and suspects Neal has bumped him off, taking his bankroll, his car and his name, and she's not above turning these assumptions into hard cash.

The story is told by Neal in a big flashback, like an illustrated short story. Poverty Row tended to make noir at the lower end of the social register, and these two characters are as morally and financially bankrupt a pair of sleazeballs as is imaginable and it's not obvious what they wouldn't do for a few bucks. As Vera says, 'We're both alike, both born in the same gutter'. Neal is great, but Savage is quite literally jawdropping as a dishonest, cheap chiseller without brains or scruples.

It was a role that made the obscure B actor Savage a legend. She doesn't turn up for the first forty minutes of a film that wraps up in 68m. But she really rips it up. She's not a beautiful woman, but she's so artlessly bad, it lends her a sexual magnetism.

At first glance this is another noir that follows the extraordinary ill fortune of a doomed, flawed male. But eventually, the penny drops; the whole narrative is a lie. Neal is a tawdry killer who is rehearsing the story he will tell the cops when they inevitably catch up with him. Hell, we've only got his word that he's even in a band. And I don't trust him for a second. Amazing work by low budget maestro Ulmer, which set a standard for what can be done with almost nothing.