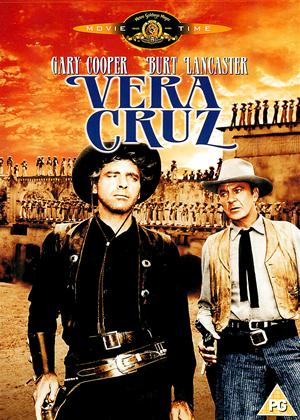 Although it does show its age at times (it was made in 1954), this is a classic western which in many ways is a missing link in cinematic evolution (apart from not being missing), since it bridges the gap between earlier, more stately westerns in which we were very seldom in any doubt who the good and bad guys were, and the later, bloodier spaghetti westerns in which morality was much more of a grey area. Robert Aldrich, who directed this film, went on to co-write "A Fistful Of Dollars" and direct "The Dirty Dozen", so it's no great surprise to see him experimenting with morally dubious heroes and, for the time, considerable amounts of violence this early in his career. Other directors who are better remembered today, such as Sam Peckinpah, have cited this movie as a major influence - "The Wild Bunch" is basically a remake with the violence turned up to 11 (Ernest Borgnine plays much the same character in both films).

Burt Lancaster, always a better actor when he was allowed to play somebody who wasn't very nice instead of being typecast as beefcake, is a charming rogue who, as the story progresses, isn't quite so charming any more, and never leaves us in any doubt that he's totally amoral and will always look after number one, while Gary Cooper is a lot more subtle as a man doing something he knows is wrong because he needs the money. Obviously we know Gary Cooper will eventually do what's right because he's Gary Cooper, but if you pay attention, more than once there's room for doubt as to quite how pure his motives are.

Unfortunately, many of the supporting cast are badly underused. The rest of the ragtag band of mercenaries of whom the two leads are the principle members are a colorful rabble it would be fun to know more about, but they're so obviously in the film only to be whittled down that they might as well be wearing those Star Trek red shirts. Caesar Romero is built up throughout the movie as a fiendishly cunning and unpredictable adversary without ever really becoming interesting. And those German lancers who are obviously stand-ins for the Nazis, though they're certainly evil, are so ineffective against any foe who isn't helpless that they make unsatisfactory villains (note to self: don't bring a lance to a gunfight!). But despite these flaws, it's an excellent high-budget western with everything you'd expect, some things you wouldn't in a film made this early, and a great deal happening most of the time, with very watchable leads who make a great double act. Recommended.

Gary Cooper was enjoyable to watch, as always. Though his range was limited, what he could do, he did well. Burt Lancaster (so young!) was very handsome, but mostly acted with his teeth -- how they gleamed! Cesar Romero -- same comment as for Gary Cooper. The plot wasn't too bad, but the numbers of bodies heaped up was ridiculous.

I won't complain about the perfectly dressed, perfectly made-up heroines - so clean, too! - as they were they same in all 50s cowboy movies.

A mediocre movie, but with a few good scenes, and some interesting historical info about one of the many Mexican revolutions.