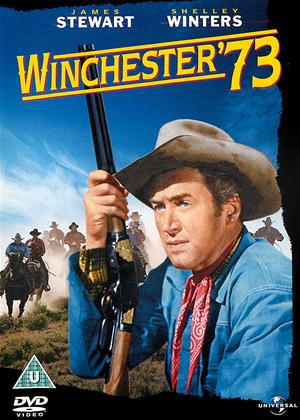 Well of course it's old-fashioned; it was made two-thirds of a century ago. Move back in time twice as far and you wouldn't need a movie because the actual Wild West was still happening. But as an example of a western from the pre-spaghetti era, before such films got both more realistic in terms of bloody violence and moral cynicism, and less realistic in every other way, it's just about perfect.

One crucial test of a good western is to ask the question about the hero that's traditionally asked about each new Bond: do you believe this man would kill you? For viewers more familiar with the overly sentimental Forrest Gump-ish rôles James Stewart played in Frank Capra movies, it may come as a surprise that the answer is "yes". Stewart plays it just right as a good and basically nice man who, if you genuinely deserve to die, won't hesitate for a second before blowing your head off. And the supporting cast includes some memorably nasty villains for him to unleash his dark side on. Stephen McNally as the primary antagonist is a generic and rather inept baddie, who never shaves properly and wears striped trousers, which in this type of film always, for some unexplained reason, proves you're no good. But Dan Duryea is superb as a slightly bonkers outlaw so slippery that if he was left alone for too long he'd probably shoot himself in the back from force of habit. John McIntire makes the most of a small part as the last guy in the world you'd want to play cards with. And you'd never have recognized a pre-fame Rock Hudson as Apache war-chief Young Bull if you hadn't been told.

Shelley Winters, still young enough to be the love-interest, is surprisingly hard-boiled for 1950, and stands up for herself very well when James Stewart isn't around to do it for her. That over-familiar cliché, the coward the hero's girl is initially hooked up with, gets far more character development than usual, and becomes a believable person instead of Expendable Doomed Guy. And best of all, apart from some very minor exceptions right at the beginning, absolutely nobody is meant to be funny. Also, the inclusion of a perfect "one in a thousand" gun as a McGuffin everybody wants, although it doesn't really have anything to do with anything, is a cunning way of compelling the supporting cast to get into arguments usually ending in death even if the hero is a hundred miles away, thus making sure there's plenty happening all the time. I'm not saying this is some kind of ultimate cinematic masterpiece with a profound message. But for what it is, it's about as good as it gets.

My description of a "Nice film" is under-stated, but it is not a "great" film - the characters play out as they should for the timeline, and the titular gun does the rounds of people, but that storyline should have been played out a bit more in my opinion, as they were too many extraneous scenes. IMO, James Stewart was a bit wooden in the film, Shelley Winters was a revelation as everyone always thinks of her as an old, "mutton dressed as lamb" actress from her later years and Rock Hudson was unrecognisable. Perhaps a bit more historical facts about why the gun was so sought after might have helped explain the whole thing.