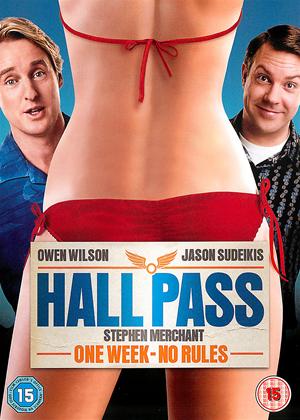 Sign up
St Trinian's 2: The Legend of Fritton's Gold

In school a ‘hall pass’ is when a teacher gives a student permission to go out of the classroom and roam around the halls without question. In the movie ‘Hall Pass’, it’s about wives giving permission to their husbands to act like unmarried single men for a week. What could ever go wrong?

Writer-directors the Farrelly Brothers (Bobby and Peter) return with yet another comedy, this time co-writing with Pete Jones about married couples who would roll the dice in order to make a marital point. Rick (Owen Wilson) and Fred (Jason Sudeikis) are best friends and their wives Maggie (Jenna Fischer) and Grace (Christina Applegate) are too. The husbands find their sex lives with their respective spouses boring and they feel discontent, missing the good ol’ days of their single days. And so, their wives give them relationship hall passes, no questions asked, and all access back to the horny life. Along for the ride are other married friends Gary (Stephen Merchant), Flats (J.B. Smoove), and Hog Head (Larry Joe Campbell), who are only there to observe the festivities (we’ll see) or maybe act as the angel/devil on their shoulders.

‘Hall Pass’ incites hearty laughs; both Owen Wilson and Jason Sudeikis (more so Wilson) portray lovable schlubs. You know they’re deplorable human beings but they’re just too dang cute and funny to provoke a lashing. The situations are ridiculous – a

The premise of ‘Hall Pass’ is every married man’s fantasy – but the women in this movie won’t be caught moping who they’re husbands hooked up with, no way. The hall pass works both ways and of course, the women will sow their inner wild oats as well. This gives ‘Hall Pass’ an interesting twist. Knowing that the hall pass can also be availed by the wife, would the husband go about his sexcapades without a hitch? Doesn’t that change the dynamic altogether? And can a marriage be ever the same after a sanctioned infidelity?