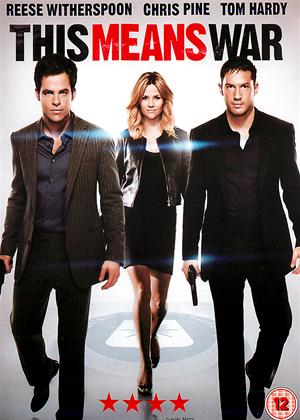 Reviews (2) of This Means War

Tom Hardy and to a lesser extent Reese Witherspoon take this poor plot with its dreadful direction and make it funny. They must have worked hard. Their comic timing and interactive acting are very entertaining. I recommend to avoid anything directed by McG who does remakes (Lethal Weapon and Charlie's Angels 30 years on) with the exception of anything with Hardy in it.

Just too silly to watch - This Means War review by JA

Almost unwatchable and just too silly for words! Do actors of the calibre of Tom Hardy and Reese Witherspoon need money sooooo much that they agree to act in such poor quality films? It wasn't even funny in the slightest and I must admit to switching it off before half way through. Who knows, the last bit may have been outstanding ................ but I doubt it. Quite frankly this type of film is not entertaining and is an insult to the intelligence. 0 out of 10!!!!! Don't waste your time on it!

Lauren (Reese Witherspoon) is a lovely woman who works as a diligent product tester; such a career is stable but she has no such luck in love. Her married and bored best friend Trish (Chelsea Handler) finds a solution: post Lauren’s profile on an online dating site. An interested suitor in Tuck (Tom Hardy) responds and Lauren agrees to date him.

Tuck’s best friend Franklin aka FDR (Chris Pine) tags along during the proceedings, and he and Lauren also hit it off. Now Lauren is torn but wise Trish suggests that she dates them both. At the same time. No problem for Lauren – until she realizes that Tuck and FDR are actually CIA and they’ve just declared war on each other. This is the romantic comedy-action flick ‘This Means War’ directed by McG.

The love triangle in ‘This Means War’ is epic to say the least. What are the chances that a girl could date guy best friends who happen to work for the CIA, right? And how can neither of the men be the best man to give way to the other? What – is Lauren a toy? Also, aren’t Tuck’s and FDR’s intrusions into Lauren’s life – bugs, surveillance, basically stalking – creepy just so they can vie for her affections? Wait, this is directed by McG?

‘This Means War’ as a romantic comedy is okay but for it to be an action movie? If you’re good with badly choreographed and worse camerawork on the action scenes, then by all means see ‘This Means War’.

The mystery is not so much how Hollywood could produce a movie such as ‘This Means War’ – it’s really Oscar winner Reese Witherspoon’s choices these days. She should just veer away from romantic comedies altogether, let Jennifer Aniston corner that market. Witherspoon is more than this. But co-stars Tom Hardy (‘Warrior’) and Chris Pine (‘Star Trek’) earn their paycheck well, and can it be that they have more chemistry with each other than with their supposed leading lady? Watching ‘This Means War’ will throw you off and even forget that Reese Witherspoon is in the mix.