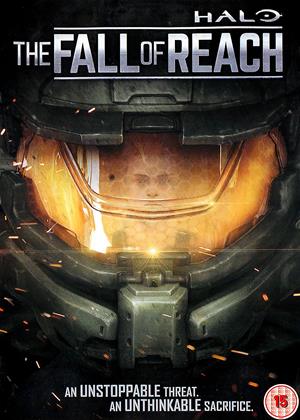 Synopsis:
Relive the origin of the legendary Master Chief and the Spartan program in this animated adaptation of one of Halo's most beloved stories. Kidnapped as children and conscripted into a brutal military training and augmentation program, the Spartans were designed to be the ultimate weapon against chaos and insurgency - but when a dangerous alien alliance known as the Covenant declares war on humanity, the Spartans might be our only hope.
Directors:
Ian Kirby
Producers:
Ian Kirby, Dan Sioui, Tina Summerford, Corrinne Robinson
Voiced By:
Jen Taylor, Steve Downes, Michelle Lukes, Brittany Uomoleale, Travis Willingham
Writers:
Heath Corson, Eric Nylund
Studio:
Platform Entertainment
Genres:
Children & Family

Rent other films like Halo: The Fall of Reach

Sign up
My Little Pony: Friendship Is Magic: Twilight's Kingdom

Sign up
Diary of a Wimpy Kid: The Long Haul

Reviews of Halo: The Fall of Reach

Video games and movies occupy different realms in what makes them stand out as stellar examples of their medium. With a video game, it has to be entertaining to play. With a movie, it has to be entertaining to watch. Their common thread is the visual aspect in which computer graphics continue to improve and impress in both the console and the projector. With each dazzling video game that marks a milestone in giving something for your eyes as much as your thumbs, there’s an utterance of “this is good enough to be a movie.” These words are spoken while engaged in being part of the story as opposed to just watching it.

Halo: The Fall of Reach exists as another shameless cash-in of the developers and producers who believe their game is so good they can craft a movie that appears stitched together from cutscenes of the actual game. I’m not much for video games in my older years, but even I wanted to play the movie this game was serving up only to skip past this dreadfully dull script. What’s fun to follow in a video game is torturous when stripped of a controller.

I’m clearly not the target for this picture despite having played a handful of Halo video games. I never found myself engaged in its sci-fi war story - it served its purpose as a mere tantalizing dressing for picking up a gun and shooting up aliens. There was never a moment where I found myself feeling for the faceless character of Master Chief or his female hologram Cortana. Both have such little personality and expression that I was never compelled to read on their origins. But that’s apparently what the gamers wanted to know as The Fall of Reach documents such a tale.

Through cold and emotionless dialogue and actions, Master Chief and friends grow up with strict training in the Spartan program to combat the aliens threat of the Covenant. And that’s about all there is to a story that’s littered with the usual tropes of sci-fi military tales. Ships battle each other with missiles in deep space. A team of soldiers propel themselves onto an alien vessel and duke it out with the strange creatures, leaving one injured soldier behind to fight valiantly toward the explosive end. For the viewer that never experienced the themes of Ender’s Game or the gritty nature of the Battlestar Galactica reboot, this picture probably resonates with some emotion for the highly-engrossed of the Halo franchise. Everyone else, however, will be rolling their eyes at the blandness of such a story that could have been theorized without such a depiction.

You would think that given Master Chief’s impersonal depictions in the video games that there would be some level of character to his younger self in this picture. Even though he was kidnapped at an early age for the Spartan program, he seems to have been born bland with a palely shaven head and zero personality. There’s no childhood innocence that is depicted being stolen. The writers seem to be more focused on the specifics of military tactics and cliche sci-fi military story elements.

For being based on the current generation of video game graphics, the animation appears strangely cheap. I could be wrong, but it seems as though the production team was using the in-game engine to generate this animation. If this is supposed to be a selling point for the video game, which it most likely was, I’m afraid the producers may have missed the point. A few minutes of game footage is all it takes to get the consumer salivating - 67 minutes is just overkill. I can recall the first footage I ever saw of the first Halo video game was a 10-minute short film of Master Chief coming to the rescue of some soldiers assaulted in an alien base. While I was enveloped in the short by viewing it through the critical eyes of a gamer, noting the graphics and the open world, I never thought to myself that this would make a great movie. Maybe I’ve been out of the video game fandom for too long, but the graphics of The Fall of Reach simply do not impress.

The Fall of Reach fails as both a movie and a commercial, neglecting to convert the non-gamers to either the story or gameplay of Halo. As someone who once took pleasure in the Halo series, this promotional picture has not inspired me to pick up the controller. If even half of this pointlessly dry storytelling is featured in the latest game, I’m not missing much. I’m sure the Halo fanbase will be quick to dismiss my review as a critic who just doesn’t understand the video games. In the same sense that I don’t think Halo would make a good movie, I don’t think Casablanca would make a good video game. If they ever make Casablanca 2: Rick’s Revenge for the next generation console, you have my blessing to blast it to kingdom come as much as this movie.