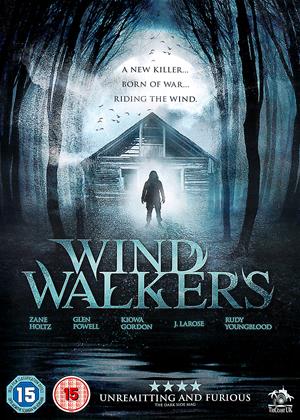 Synopsis:
'Wind Walkers' is the story of a group of friends who travel to the remote Florida everglades where they discover that an ancient, malevolent curse is tracking them. Before they can unpack their rifles they discover their cabin demolished and the mangrove forests unusually silent. Slowly they realize that one of their own may be possessed by something he has brought home from overseas. Something so horrible and deadly that even he is unaware of its devilish presence.
Actors:
Glen Powell, Zane Holtz, Rudy Youngblood, Castille Landon, Johnny Sequoyah, Kiowa Gordon, J. LaRose, Phil Burke, Heather Rae, Christopher Kriesa, Russell Friedenberg, Jennifer Saba Conrad, Tsulan Cooper, Vinnie Duyck
Directors:
Russell Friedenberg
Producers:
Ricou Browning Jr., Heather Rae, Elayne Schneiderman, Dori Sperko
Writers:
Russell Friedenberg
Studio:
TriCoast UK
Genres:
Horror, Thrillers

Seven friends venture into the wilderness for a hunting trip. They are fairly dour bunch most of the time, which is something of a relief when one considers a young ‘group of friends’ are usually represented as permanently drunk/stoned/horny, obnoxious and arrogant. Their world, as represented here, is small-town Florida, full of local stores and local outskirt communities, gatherings, cheroots and respectable upbringings. Sonny (Glen Powell) is the only character who seems to have his own agenda.

As their collective hunt continues, it seems there is ‘something’ out there in the Everglades, leaving a slew of butchered animal cadavers in its wake. One of their number, wistful soldier Sean (Zane Holtz) remains troubled by his experiences during active service, and the sense of impending doom isn’t exacerbated when his friend Matty’s mother senses the ‘call of the wind walker’ through what appears to be the spirit of her son, who is currently missing.

I am no expert on Native American history or culture, but there are suggestions of a wendigo spirit, of a shaman, as well as a generous sprinkling of subtle gore. The threat seems to be deliberately vague anyway, which will frustrate some. A mix of ‘The Thing (1982)’ styled spiritual possession and cannibalism is skilfully scattered throughout the mystery – unfortunately laced with an unnecessary rock music score which often succeeds in undermining the mood – but it works for me, mostly. It is good, spooky, potent, slow-burning story-telling.

When Sean promises Lexi (Castille Lanon), “I can kill this,” no-one is hugely confident because, whereas we meet several carriers of the virus itself, we witness nothing tangible controlling them. However, a hurried explosive climax delays – rather than destroys – the problem.

Intriguing rather than essential, a mixture of certain styles and inspirations rather than focussed, this is a recommended horror.